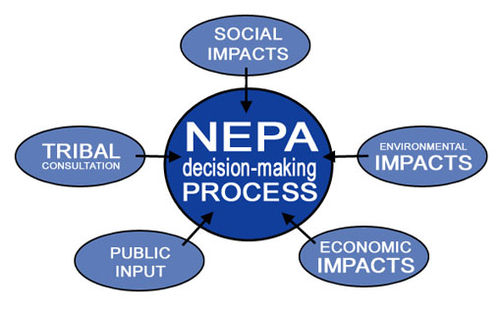 Graphic illustrating the components of the NEPA process.

For more information on "major" actions and other NEPA issues, see the NEPA Section on the Council of Environmental Quality web site.

The National Environmental Policy Act of 1969 (NEPA) arose out of a growing sentiment for environmental protection in the late 1950's and 1960s. Congress enacted NEPA as the foundation of an overarching national policy to protect the environment. One author close to the legislative drafting has since stated, "the challenge was to approach environmental management in a comprehensive way. The new values of environmental policy had to intrude somehow into the most remote recesses of the federal administrative machinery and begin to influence the multitude of decisions being made by thousands of officials." (Drefus & Ingram, The National Environmental Policy Pact: A View of Intent and Practice, 16 Nat. Resources J. 243, 246 (1976). Congress achieved this goal through the procedures required in 43 USC 4332(2)(C) to include a detailed statement of the environmental impacts of every major federal action significantly affecting the quality of the human environment. As interpreted, NEPA is a procedural statute requiring federal agencies to consider all potential significant environmental impacts before acting.

Have a NEPA Document Collection to add that doesn't yet exist in this collection?

This query has been included to allow you to use the black arrows in the table header cells to sort the table data.

Retrieved from "https://openei.org/w/index.php?title=NEPA&oldid=961076"
Categories:
OpenEI is developed and maintained by the National Renewable Energy Laboratory with funding and support from the U.S. Department of Energy and a network of International Partners & Sponsors.