Ground Magnetics:
The surface magnetic method is the study of the distribution of magnetic minerals in the upper 20-30km of the earth's crust, recorded at an observation point on the earth's surface.
Other definitions:Wikipedia Reegle

Use in Geothermal Exploration
"See [[Magnetic Techniques" cannot be used as a page name in this wiki.
See Magnetic Techniques
Field Procedures
The given value was not understood.
A surface magnetic survey is a low-impact, non-invasive geophysical technique. An instrument called a magnetometer is used for the measurement. There a few varieties of magnetometers used in geophysical exploration (See Data Acquisition below) and all are transportable by one person in the field using a backpack. The measurement can be taken at one point or in a continuous profile and causes no surface disturbance. 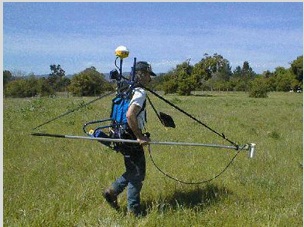 Geomatrix G-858 Magnetometer[2]
Environmental Mitigation Measures
The largest impact would be due to accessing the stations, by foot or vehicle or whatever means of transport is used. The measurement itself is non-invasive and there is no disturbance to the topsoil.
Physical Properties
See Magnetic Techniques
Data Access and Acquisition
The given value was not understood.
The survey design for a ground magnetics survey depends on the anticipated target size and depth. Stations are generally laid out in a grid or profiles perpendicular to the strike. The station interval and line spacing are the two primary parameters for a magnetic survey.

The data must be corrected for: diurnal effects relating to temporal variations in the geomagnetic field; the normal-field correction to account for variations in geomagnetic intensity with latitude and longitude; and elevation and terrain corrections.[3] A base station magnetometer may be utilized to continuously monitor diurnal variation.

There are a few varieties of magnetometers used for geophysical exploration, outlined below.

• Fluxgate magnetometer- The fluxgate magnetometer consists of two identical ferromagnetic cores with a primary winding about each core. The primary windings are connected in series but in opposite orientations, and an AC current is applied to the windings which inversely saturates the cores. A secondary coil is wound around both cores; this coil will not experience an induced current in the absence of an external magnetic field. However when an external magnetic field is encountered, a net current is induced in the secondary coil which depends on the rate of change of the magnetic flux along the axis of the cores. The voltage output of the secondary coil is proportional to the amplitude of the earth’s external magnetic field. A fluxgate magnetometer typically contains three pairs of cores in order to measure the three components of the earth’s magnetic field <x,y,z>. The orientation or alignment of the instrument is crucial to the accurate measurement of the field.[1][3]

• Proton-precession magnetometer- A proton-precession magnetometer utilizes a sensor element containing a liquid with a large amount of hydrogen nuclei (water, decane, benzene). This sensor element is surrounded by a coil through which a direct current is applied. The applied DC current induces a polarizing magnetic field and results in an excitation within the fluid. This causes a transition of the molecules into a higher energy state, resulting in displacement of the protons in the fluid out of alignment with the earth’s magnetic field. Once the DC current is switched off, an electromagnetic field is generated and the protons will precess about the direction of the earth’s ambient magnetic field before returning to the original alignment. The resonance, or precession, frequency (~2kHz) is directly proportional to the intensity of the earth’s magnetic field. When the measured precession frequency is divided by a constant, the gyromagnetic ratio of the proton, the strength of the earth’s total magnetic field is determined.[1][3]

• Alkali-vapor magnetometer- The alkali-vapor magnetometer is also known as the optical absorption magnetometer. An alkali metal such as cesium, rubidium, or potassium is subjected to optical pumping where the electrons are brought to a higher energy level through the application of the proper frequency of light. The glass cell in which the vapor is contained becomes transparent during this process as no more electrons remain to absorb the applied radiation. A radio-frequency sweep is then applied to the glass cell and at the appropriate output frequency, the electrons return to a lower energy state and the glass cell becomes opaque once again. The output frequency is measured with a high level of accuracy, making the alkali-vapor magnetometer a very sensitive instrument (to the order of 0.01 nT).The precise frequency at which the electrons return to a lower energy level depends on the external field and is used to derive the earth’s magnetic field strength.[1][3]

Best Practices
In the survey design planning:
• The line direction should be positioned perpendicular to the dominant geologic strike direction
• Measurement spacing should be designed to include at least five magnetic measurements per anomaly
• Line spacing and station interval need to be spaced finely enough to characterize spatial distribution of anticipated anomalies

The given value was not understood.
References

Retrieved from "https://openei.org/w/index.php?title=Ground_Magnetics&oldid=598344"
Categories:
OpenEI is developed and maintained by the National Renewable Energy Laboratory with funding and support from the U.S. Department of Energy and a network of International Partners & Sponsors.