Seismic Techniques:
Seismic methods provide information regarding the elastic properties of the subsurface through the measurement of the propagation velocity of elastic waves.
Other definitions:Wikipedia Reegle

Use in Geothermal Exploration
Seismic techniques are used in geothermal exploration in a wide variety of applications, ranging from regional exploration for a heat source to determining locations of individual fractures.[1]

Physical Properties
The given value was not understood.
Seismic waves are classified as elastic waves because they cause nonpermanent deformation to the material through which they propagate. The characteristics of the deformation define the wave type.[2] 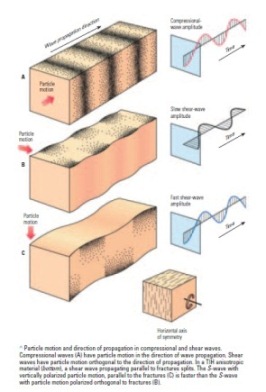 Compression and shear wave particle motion and direction of propagation.[3]


Velocity is the physical parameter measured by seismic techniques. Seismic waves propagate through a rock body at a velocity which is governed by the elastic properties (stress and strain, Young's modulus) and density of the geological formation.[2] Additional factors which influence compressional and shear wave velocities are lithology, extent of fractures, temperature, fluid content, saturation, and fluid pressure in the subsurface.[2][4]Empirical ranges of compressional and shear wave velocities through different lithologies are shown in the figure below.[5] 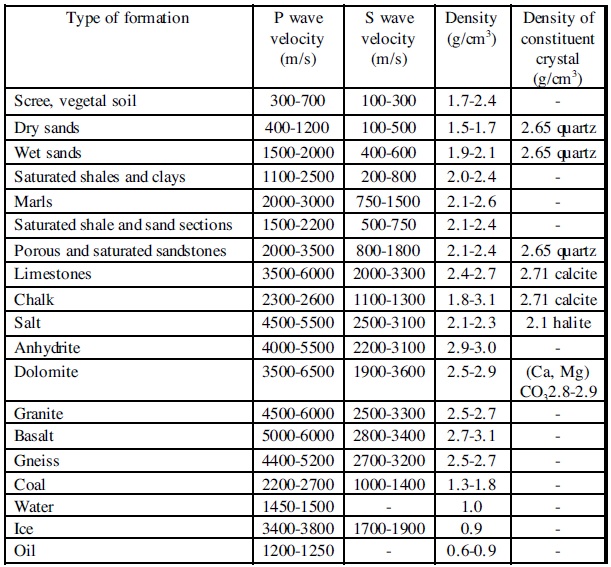 Typical rock velocities.[5]
Acoustic impedance contrasts are the ‘reflectors’ which are mapped using seismic techniques and may represent changes in lithology or discontinuous geological contacts. The acoustic impedance is defined as the product of the density and p-wave velocity within a rock unit. When an elastic wave encounters an acoustic impedance boundary, a portion of the wave energy is reflected off of the boundary and a portion is refracted into the second medium, according to Snell’s Law as depicted in the figure below.[4][6] 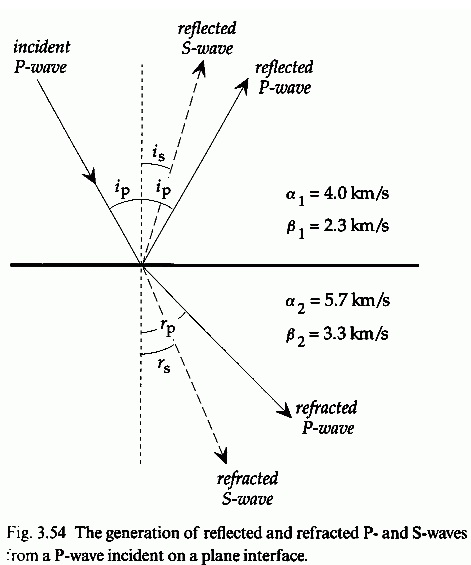 The given value was not understood.
References

Retrieved from "https://openei.org/w/index.php?title=Seismic_Techniques&oldid=603244"
Categories:
OpenEI is developed and maintained by the National Renewable Energy Laboratory with funding and support from the U.S. Department of Energy and a network of International Partners & Sponsors.