Information current as of 2020

The CWA addresses point source water pollution, non-point source water pollution, and the dredge and fill of wetland. The primary agency responsible for the CWA is the United States Environmental Protection Agency (EPA). Although, other federal and state agencies have a role in administering the CWA as well. In particular, the US Army Corps of Engineers administer 404 dredge and fill permits for wetlands.

The Safe Drinking Water Act (SDWA) provides the framework for protection of drinking water. SDWA requires that states develop source water assessment programs (SWAPs) that must be approved by the EPA. SWAPs are used to analyze existing and potential threats to the quality of public drinking water. The EPA developed Underground Injection Control (UIC) rules to protect underground sources of drinking water. When there is potential for groundwater contamination by injection well, the developer must obtain an UIC permit. Typically, UIC permits are used for spent geothermal fluids. If there is potential groundwater contamination by surface discharge, the developer will be required to obtain a permit through the state. Most of these controls are implemented by state agencies. 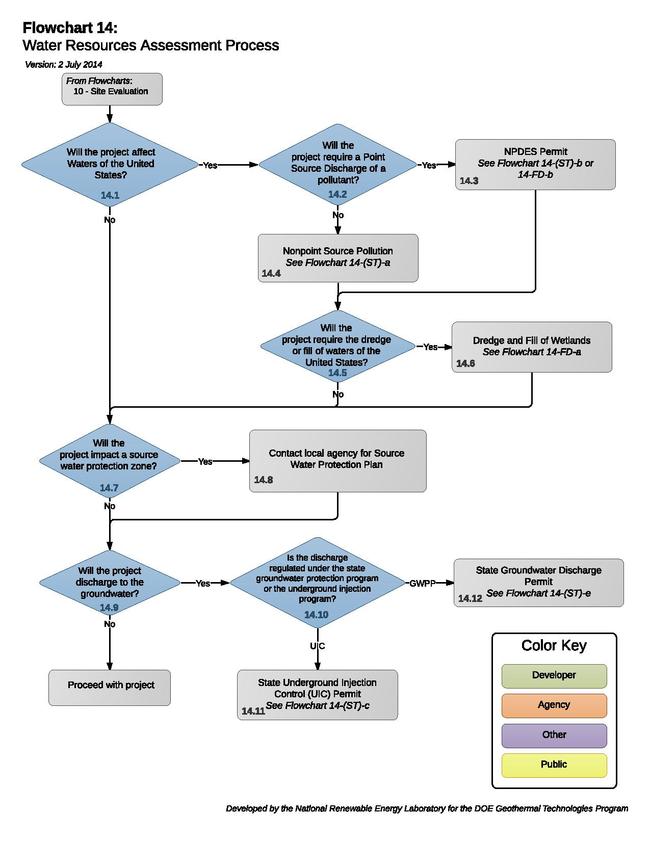 14.1 - Will the Project Affect Waters of the United States?

The Clean Water Act establishes the basic structure for regulating discharges of pollutants into the waters of the United States and establishes water quality standards for surface waters. The basis of the CWA was enacted in 1948 and was called the Federal Water Pollution Control Act. The Act was significantly reorganized and expanded in 1972. "Clean Water Act" became the Act's common name with amendments in 1972. Under the CWA, EPA has implemented pollution control programs such as setting waste water standards for industry. The CWA makes it unlawful to discharge any pollutant from a point source into waters of the United States, unless a permit is obtained under the EPA's National Pollutant Discharge Elimination System (NPDES). Point sources are discrete conveyances such as pipes or man-made ditches.

Tributaries must be perennial or intermittent within a typical year, which the rule defines as a year "when precipitation and other climatic variables are within the normal periodic range for the geographic area of the applicable aquatic resource based on a rolling thirty-year period." 33 C.F.R. § 328.3(c)(13).

"Waters of the United States" do not include:

Developers should be aware of ongoing litigation on this matter and continue to monitor the issue at the state and national level. For example, the state of Colorado won a preliminary injunction preventing the new WOTUS definition going into effect in the state. The EPA provides up-to-date information on the Environmental Protection Agency - Clean Water Rule Website.

14.2 - Will the Project Require a Point Source Discharge of a Pollutant?

A point source is a single identifiable source of water pollution. Under CWA § 502, the term "pollutant" means dredged spoil, solid waste, incinerator residue, sewage, garbage, sewage sludge, munitions, chemical wastes, biological materials, radioactive materials, heat, wrecked or discarded equipment, rock, sand, cellar dirt and industrial, municipal, and agricultural waste discharged into waters of the United States. Generally, point source discharges are surface-based discharges; the effect of which will flow into waters of the United States. This term does not mean (A) "sewage from vessels"; or (B) water, gas, or other material which is injected into a well to facilitate production of oil or gas, or water derived in association with oil or gas production and disposed of in a well, if the well used either to facilitate production or for disposal purposes is approved by authority of the State in which the well is located, and if such State determines that such injection or disposal will not result in the degradation of ground or surface water resources.

On certain federal and state lands the EPA controls NPDES permitting. For other lands, in most states, the EPA has delegated NPDES permitting to a state environmental agency.

In most states, under most circumstances, the EPA has delegated NPDES permitting to a state environmental organization.

In Colorado, the Colorado Department of Public Health and Environment requires a discharge permit to discharge any pollutant into any state water from a point source. For more information, see: State Pollutant Discharge Elimination System Permit:
14-CO-b

If a state environmental agency in not authorized to issue a NPDES permit than the EPA will handle the NPDES process.

In California, geothermal developers should consult with the California State Water Resources Control Board or the Regional Water Quality Control Boards to determine whether the proposed project fall within any of the non-point solution pollution control programs. For more information, see: Nonpoint Source Pollution:
14-CA-a

In Hawaii, geothermal developers should consult with the Hawaii Department of Health regarding the State’s non-point source program. For more information, see: Nonpoint Source Pollution:
14-HI-a

14.5 - Will the Project Require the Dredge or Fill of Waters of the United States?

CWA Section 404 establishes a program to regulate the discharge of dredged and fill material into waters of the United States, including wetlands. "Waters of the United States" is defined above in 14.1. Responsibility for administering and enforcing Section 404 is shared by the US Army Corps of Engineers and EPA. The Army Corps of Engineers administers the day-to-day program, including individual permit decisions and jurisdictional determinations; develops policy and guidance; and enforces Section 404 provisions. EPA develops and interprets environmental criteria used in evaluating permit applications, identifies activities that are exempt from permitting, reviews/comments on individual permit applications, enforces Section 404 provisions, and has authority to veto Army Corps of Engineers permit decisions.

The basic premise of the program is that no discharge of dredged or fill material may be permitted if:

(2) the nation’s waters would be significantly degraded.

"404" dredge and fill permits are administered by the US Army Corps of Engineers.

14.7 - Will the Project Impact a Source Water Protection Zone?

The Safe Drinking Water Act (SDWA) Amendments of 1996 required states to develop and implement source water assessment programs (SWAPs) to analyze existing and potential threats to the quality of the public drinking water throughout the state. Using these programs, most states have completed source water assessments for every public water system. The EPA works with state agencies, and local municipalities to create EPA-approved state Source Water Assessment Programs.

The developer should contact the local environmental agency or water agency to determine if the project is in a source water protection zone.

If the project will impact a source water protection zone then the developer should contact the local environmental or water agency to see if any permits are required or if there are special procedures to follow.

14.9 - Will Project Discharge to the Groundwater?

The Safe Drinking Water Act of 1974 established the basic framework for protecting the drinking water of the United States. The act instructs the United States Environmental Protection Agency (EPA) to establish a national program to prevent underground injection activities that endanger drinking water sources. The EPA has promulgated a series of Underground Injection Control (UIC) regulations to protect underground sources of drinking water. Injection wells are not allowed to discharge fluids or waste fluids containing any contaminant that may cause a violation of any National Primary Drinking Water Quality Standard or that may otherwise adversely affect human health.

In most cases EPA UIC controls have been delegated to a state environmental agency.

14.10 - Is the Discharge Regulated under the State Groundwater Protection Program or the Underground Injection Program?

Most applicable to geothermal development, If the potential groundwater contamination is by injection well then the developer must obtain a UIC permit from the proper state agency.

If the potential groundwater contamination is by surface discharge and seepage the developer must obtain a groundwater discharge permit from the proper state agency.

EPA regulations and state law dictate UIC permits. In most states UIC permits are administered by the state's environmental agency.

In Utah, geothermal developers should consult with the Utah Department of Environmental Quality about the State’s Underground Injection Control program. For more information, see

In most, states Groundwater Discharge Permits are administered by the state's environmental agency.

In Montana, developers may need to obtain a Groundwater Discharge Pollution System Permit from the Montana Department of Environmental Quality for a geothermal project. For more information, see: Groundwater Pollution Control System:
14-MT-e

In Texas, developers may need to obtain Groundwater Discharge Permit from the Railroad Commission of Texas for a geothermal project. For more information, see:

In Utah, developers may need to obtain Groundwater Discharge Permit from the Utah Department of Environmental Quality for a geothermal project. For more information, see: Groundwater Quality Protection Permit:
14-UT-e

Retrieved from "https://openei.org/w/index.php?title=RAPID/Roadmap/14&oldid=983870"
Categories:
OpenEI is developed and maintained by the National Renewable Energy Laboratory with funding and support from the U.S. Department of Energy and a network of International Partners & Sponsors.