The NPDES program requires facilities discharging from a point source into waters of the U.S. to obtain discharge permits. (A point source is a conveyance such as a pipe or other point.) An NPDES permit contains limits on what can be discharged and other provisions to ensure that the discharge does not harm water quality or the public's health. (see Idaho NPDES Permits Webpage).

There are two basic types of NPDES permits:

The waters of the United States do not include numerous sources of water even where they otherwise meet the terms of 40 CFR 230.3(o)(1)(iv) through (vii). Generally not included are waters associated with waste treatment systems, prior converted cropland, ditches, numerous types of artificial features, groundwater, stormwater control features, and structures related to wastewater recycling (for a detailed description see 40 CFR 230.3(o)(2)).

"Waters of the United States" is defined broadly by regulation under the Clean Water Rule as developed by the EPA and USACE. The effective date for this new rule is August 28, 2015. The new rule modifies the regulatory definition to more precisely define jurisdictional waters under the CWA. In most states the rule took effect immediately, however, a number of states have initiated litigation to challenge implementation of the new rule.

On October 9, 2015, the U.S. Court of Appeals for the Sixth Circuit issued a stay halting implementation of the new rule nationwide pending its own determination of its own exclusive jurisdiction to review the rule (see Ohio, et al. v. EPA, Order of Stay). If the court determines it has exclusive jurisdiction the stay will likely remain in place pending a determination on the merits of the case. The court anticipates it will make a jurisdictional determination within a few weeks of the date of its order to stay. Given this uncertainty, developers should anticipate continued litigation on this matter and continue to monitor the issue at the state and national level. The EPA provides information on the ongoing effort to implement the EPA Clean Water Rule Website. 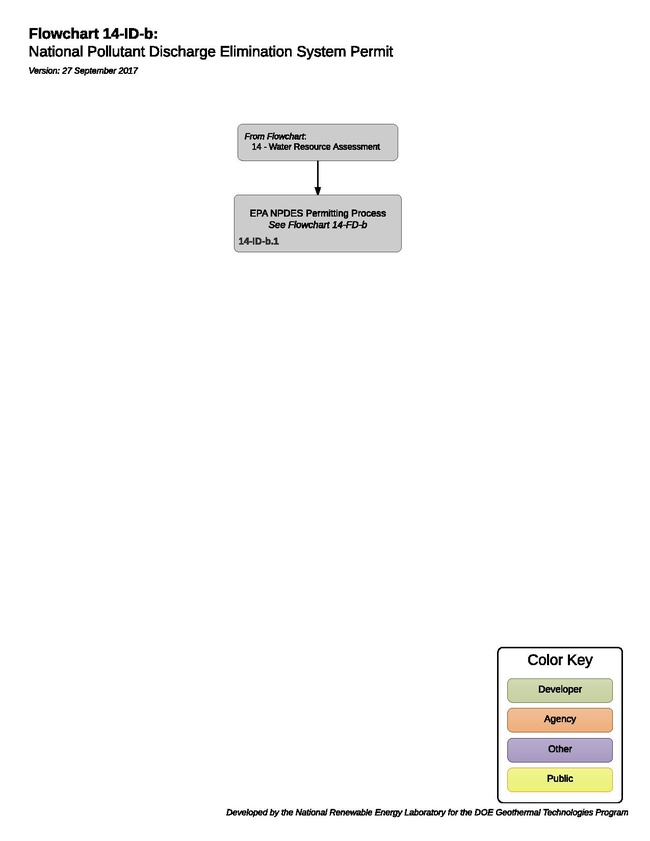 In Idaho, the NPDES permit program is administered by EPA, which means EPA is responsible for issuing and enforcing all NPDES permits in Idaho. Idaho is one of only a handful of states where the NPDES program is administered by EPA. States are encouraged by EPA to attain primacy for the program. Primacy enables states to assume responsibility for administering certain federally mandated programs, such as the NPDES program. Over the past several years, various studies have been conducted on the pros and cons of transferring primacy for the NPDES program from EPA to DEQ. Several reports have been submitted to the Legislature outlining the benefits of doing so, but questions remain over potential costs and funding. As a result, responsibility for operating the program in Idaho continues to rest with EPA.

Retrieved from "https://openei.org/w/index.php?title=RAPID/Roadmap/14-ID-b&oldid=952974"
Categories:
OpenEI is developed and maintained by the National Renewable Energy Laboratory with funding and support from the U.S. Department of Energy and a network of International Partners & Sponsors.