The Nevada Division of Environmental Protection (NDEP) Bureau of Water Pollution Control (BWQC) is responsible for protecting Nevada water quality from adverse effects resulting from the addition of a pollutant or pollutants to waters of the state under NRS 445A Water Controls. The NDEP protects groundwater quality through issuing groundwater discharge permits under NAC 445A.228 for activities that impact groundwater quality such as surface disposal, septic systems, unlined ponds, overland flow, reuse and irrigation. Groundwater discharge should not be confused with non-point source discharges. Groundwater discharges impact underground sources of water such as drinking water supplies, while non-point source discharges impact surface water bodies such as rivers or streams through runoff. 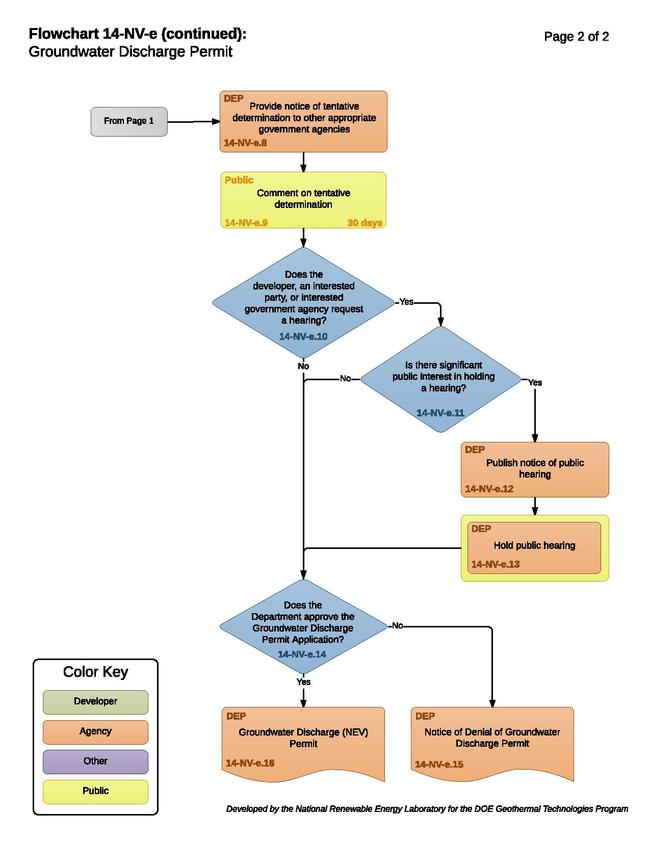 A developer seeking to discharge pollutants into waters of the state of Nevada (including groundwater) must complete a Groundwater Discharge Permit Application provided by the NDEP no less than 180 days before the discharge of such pollutants. The principle executive officer of the corporation, a general partner of a partnership, or the proprietor of a sole partnership must certify and sign the application before submitting it to the NDEP. NAC 445A.230

14-NV-e.4 to 14-NV-e.5 – Does the NDEP Determine a Groundwater Discharge Permit is not Required

If the NDEP determines the activity does not require a NEV permit upon reviewing the application, the NDEP notifies the developer of the determination in writing, which constitutes a final agency action.

The NDEP formulates and prepares a tentative determination regarding the permit application before issuing public notice of the proposed issuance or denial of the permit. The tentative determination must include the NDEP’s decision to issue or deny the permit. If the DEP determines to issue a permit, the Draft permit must include the proposed effluent limitations, a proposed schedule of compliance, and a brief description of any other proposed special conditions. NAC 445A.233

The NDEP publishes notice of every application for a NEV permit and the NDEP’s tentative determination to issue or deny the permit. The NDEP must circulate the public notice within the geographical area of the proposed discharge by publishing notice in a local newspaper or periodical. Additionally, the NDEP must mail notice to any person or group on a mailing list maintained by the NDEP or upon request of the person or group. The public notice should include:

The public must receive 30 days to submit written comments on the discharge application and tentative determination following the date of public notice. The NDEP must retain all of the written comments submitted during the comment period and consider such comments in the final determination. The NDEP director may extend the comment period at his or her discretion. NAC 445A.234

The NDEP director must provide interested parties the opportunity to request a hearing during the 30 day public comment period. If the developer, an interested party, or a interested government agency requests a hearing the NDEP Director must determine if there is significant public interest in holding a public hearing. NAC 445A.238

If the NDEP director determines there is significant public interest in holding a public hearing, the NDEP publishes notice of the hearing at least 30 days before the hearing. The public notice should include:

The NDEP holds a public hearing on the tentative determination to issue or deny the permit application.

14-NV-e.14 to 14-NV-e.16 – Does the Department Approve the Groundwater Discharge Permit Application

Retrieved from "https://openei.org/w/index.php?title=RAPID/Roadmap/14-NV-e&oldid=887449"
Categories:
OpenEI is developed and maintained by the National Renewable Energy Laboratory with funding and support from the U.S. Department of Energy and a network of International Partners & Sponsors.