As authorized by the United States Environmental Protection Agency (EPA) under the Clean Water Act, the National Pollutant Discharge Elimination System (NPDES) permit program controls water pollution by regulating point sources that discharge pollutants into waters of the United States. Point sources are discrete conveyances such as pipes or man-made ditches. Individual homes that are connected to a municipal system, use a septic system, or do not have a surface discharge do not need an NPDES permit; however, industrial, municipal, and other facilities must obtain permits if their discharges go directly to surface waters. Stormwater discharge permits are required for certain activities by EPA regulations at 40 CFR § 122.26(b)(14). In compliance with this regulation, the Nevada Division of Environmental Protection (NDEP) (a division of the Nevada Department of Conservation and Natural Resources) issues NPDES permits in accordance with EPA regulations. However, in the relevant Nevada Administrative Code sections, "the Department" refers to the Nevada Department of Conservation and Natural Resources. NAC 445A.031.

More information can be found on the NPDES permit program on the EPA’s NPDES Permit Program Website, along with links to forms and guidance documents. Nevada uses the Federal NPDES Discharge Permit Program forms. NDEP provides links to the appropriate NPDES Permit Forms which links directly to the EPA's.

The waters of the United States do not include numerous sources of water even where they otherwise meet the terms of 40 CFR 230.3(o)(1)(iv) through (vii). Generally not included are waters associated with waste treatment systems, prior converted cropland, ditches, numerous types of artificial features, groundwater, stormwater control features, and structures related to wastewater recycling (for a detailed description see 40 CFR 230.3(o)(2)).

"Waters of the United States" is defined broadly by regulation under the Clean Water Rule as developed by the EPA and USACE. The effective date for this new rule is August 28, 2015. The new rule modifies the regulatory definition to more precisely define jurisdictional waters under the CWA. In most states the rule took effect immediately, however, a number of states have initiated litigation to challenge implementation of the new rule.

On October 9, 2015, the U.S. Court of Appeals for the Sixth Circuit issued a stay halting implementation of the new rule nationwide pending its own determination of its own exclusive jurisdiction to review the rule (see Ohio, et al. v. EPA, Order of Stay). If the court determines it has exclusive jurisdiction the stay will likely remain in place pending a determination on the merits of the case. The court anticipates it will make a jurisdictional determination within a few weeks of the date of its order to stay. Given this uncertainty, developers should anticipate continued litigation on this matter and continue to monitor the issue at the state and national level. The EPA provides information on the ongoing effort to implement the EPA Clean Water Rule Website. 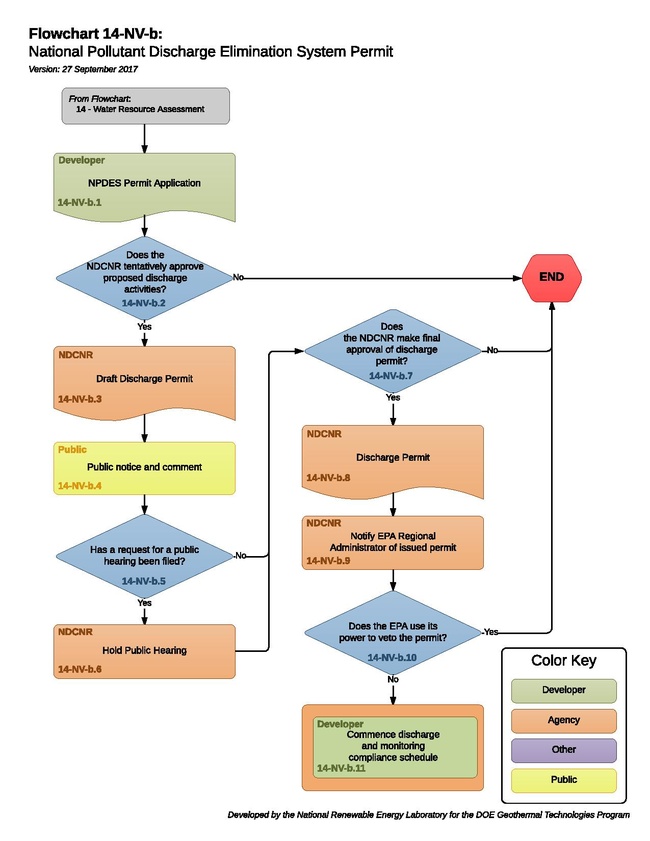 The discharge of a pollutant by a point source into the waters of the state of Nevada is prohibited by NRS 445A.465 unless a permit has been issued by the Nevada Department of Conservation and Natural Resources (NDCNR) to do so. The NDCNR has delegated authority for administering the NPDES program to the Nevada Division of Environmental Protection which is an agency within NDCNR.

NAC 445A.228 does provide the following exemptions from the requirement to obtain a permit for discharge:

Discharge permits are prohibited when the U.S. Army Corps of Engineers finds that the activity would substantially impair anchorage and navigation of navigable waters, or the United States Environmental Protection Agency objects in writing to issuance of the permit.

The NDCRN must prepare and formulate a tentative determination regarding the permit prior to public notice which must include the following components, organized into a draft permit:

A brief description of the procedures for the final determination and the 30-day comment period and any other means by which an interested person may comment upon the permit will also be included in the public notice.

Confidentiality: NAC 445A.237 allows some degree of confidentiality through the public notice and discharge application process. The NDCRN must keep confidential all information and records other than effluent data necessary for the permit. Any information given confidential status will not be protected from disclosure to the EPA Regional Administrator during his/her review process.

Any interested agency, person or group, or affected state may request a public hearing within the applicable 30-day public notice and comment period. The request must indicate the interest of the person requesting the hearing and include reasons why the hearing is warranted. Any hearing held must be within the geographic area of the proposed discharge if possible.

‘’’Discharge Permit’’’ Duration of discharge permits issued are fixed and do not exceed 5 year terms. The expiration date will be recorded on each permit. New applications must be filed with the NDCNR to obtain renewal or modification of a permit at least 180 days prior to expiration of the permit. NAC 445A.241. The same procedures for issuance of a new permit are followed for the renewal of a permit.

In accordance with NAC 445A.242, every issued permit must be transmitted to the Regional Administrator of the EPA immediately following its issuance along with all terms, conditions, requirements, or documents which are a part of such permit. Ultimately, the EPA has the authority to administer the NPDES program and has the power to veto any specific discharge permit issued by the state of Nevada if the discharge presents “a substantial risk to human health and the environment.”

Comply with all listed conditions and compliance measures in individual discharge permit along with all NAC regulations for verification of water quality, inspection, testing and sampling, monitoring, recording and reporting effluent levels. NAC 445A.228-445A.263.

Retrieved from "https://openei.org/w/index.php?title=RAPID/Roadmap/14-NV-b&oldid=952977"
Categories:
OpenEI is developed and maintained by the National Renewable Energy Laboratory with funding and support from the U.S. Department of Energy and a network of International Partners & Sponsors.