Lithologically Controlled:
No definition has been provided for this term. 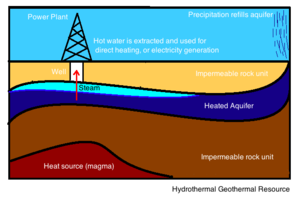 Impermeable lithological layers allow for fluids beneath the surface to be geothermally heated. http://www.energybc.ca/profiles/hightempgeo.html

Hydrothermal fluids may be lithologically controlled as is the case in the Salton Trough region where sandstones often lack cement (due to certain properties of the local hydrothermal fluid) allowing for increased permeability, capped by less porous shales.

Retrieved from "https://openei.org/w/index.php?title=Lithologically_Controlled&oldid=943282"
Categories:
OpenEI is developed and maintained by the National Renewable Energy Laboratory with funding and support from the U.S. Department of Energy and a network of International Partners & Sponsors.