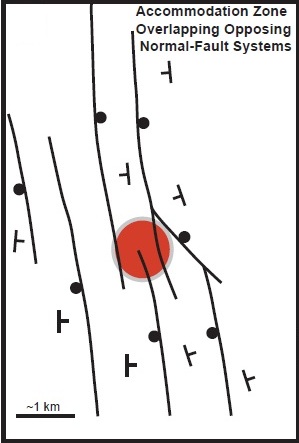 Faulds classified accommodation zones as a one of two major subsets of fault intersection types that act as structural controls on geothermal systems in the Basin and Range province of the US.

Fault intersections between normal faults and transversely oriented strike-slip or oblique-slip faults account for 22% of the Basin & Range structures known to host geothermal systems as of 2011. Multiple minor faults in these areas create connections between major structures, allowing fluids to flow through highly fractured dilational quadrants.[1]

"Accommodation zones in normal fault systems are more prevalent within the extensional terrane that characterizes much of the Great Basin northeast of the Walker Lane.”[1]

Retrieved from "https://openei.org/w/index.php?title=Accommodation_Zone&oldid=943145"
Categories:
OpenEI is developed and maintained by the National Renewable Energy Laboratory with funding and support from the U.S. Department of Energy and a network of International Partners & Sponsors.