Caldera Rim Margins:
No definition has been provided for this term. 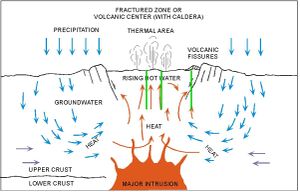 A conceptual drawing of a caldera derived geothermal system. Hot water from beneath the caldera rises to the surface mainly via faults and fissures that form the caldera rim. Franzson, Hjalti, 2013: General Model of a High-T Reservoir. Iceland Geosurvey (ISOR).

Caldera rims often act as adequate hydrothermal conduits. They are particularly productive when intersected by other faults.

Retrieved from "https://openei.org/w/index.php?title=Caldera_Rim_Margins&oldid=943154"
Categories:
OpenEI is developed and maintained by the National Renewable Energy Laboratory with funding and support from the U.S. Department of Energy and a network of International Partners & Sponsors.