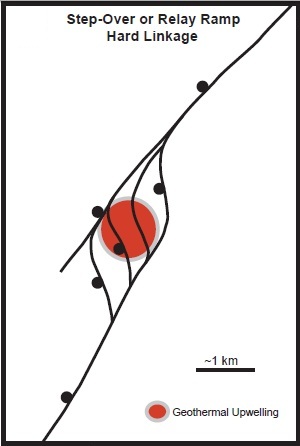 Stepover or relay ramps between overlapping fault strands are one of the most favorable structural settings for geothermal activity. As of 2011, ~32% of the more than 200 document geothermal fields in the Basin & Range were associated with step-overs or relay ramps in normal fault zones. Increased fracture density generated by intersections between multiple overlapping fault strands results in enhanced permeability that facilitates hydrothermal fluid flow. According to Faulds et al. (2011):

"Step-overs in normal fault systems are more prevalent within the extensional terrane that characterizes much of the Great Basin northeast of the Walker Lane.”[1]

Retrieved from "https://openei.org/w/index.php?title=Stepover_or_Relay_Ramp_in_Normal_Fault_Zones&oldid=943308"
Categories:
OpenEI is developed and maintained by the National Renewable Energy Laboratory with funding and support from the U.S. Department of Energy and a network of International Partners & Sponsors.