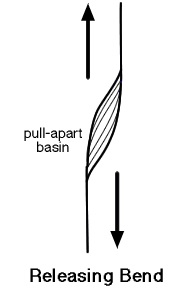 Pull-aparts are dilatational features that form along accommodation bends in strike-slip fault zones. 4% of all known Great Basin geothermal systems are located in pull-aparts, but are more abundant within or along the margins of the Walker Lane.[1]

Retrieved from "https://openei.org/w/index.php?title=Pull-Apart_in_Strike-Slip_Fault_Zone&oldid=943297"
Categories:
OpenEI is developed and maintained by the National Renewable Energy Laboratory with funding and support from the U.S. Department of Energy and a network of International Partners & Sponsors.