Rift Zone:
A divergent plate boundary within a continent
Other definitions:Wikipedia Reegle 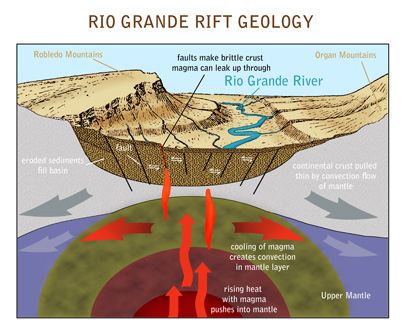 Rift valleys occur at divergent plate boundaries, resulting in large graben structures and increased volcanism. The East African Rift is an example of a continental rift zone with increased volcanism, while the Atlantic’s spreading Mid-Ocean Ridge is host to an enormous amount of geothermal activity in Iceland.

Some rift zones, like that of the Gulf of California, exhibit transtensional strains exemplified by strike-slip regions like that of the San Andreas fault. Rift zones may also give way to leaky transform faults that may contribute to increased volcanism as is thought to be the case with Las Tres Virgenes in Baja California, Mexico and the Azores Islands which are located on a triple junction.

Want to add an example to this list? Select a Geothermal Resource Area to edit its "Tectonic Setting" property using the "Edit with Form" option.

CSV
Retrieved from "https://openei.org/w/index.php?title=Rift_Zone&oldid=943300"
Categories:
OpenEI is developed and maintained by the National Renewable Energy Laboratory with funding and support from the U.S. Department of Energy and a network of International Partners & Sponsors.