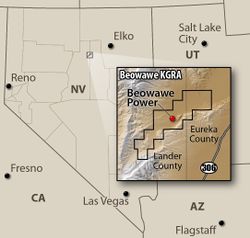 The Beowawe Geothermal Area is located on the border of Eureka and Lander counties in Whirlwind Valley, Nevada about 10 miles East of the town of Beowawe. It is one of the state’s largest geothermal fields with some of the highest reported subsurface temperatures, making the area ideal for development of geothermal power production.[5]

The area is home to the Beowawe power plant, with an original installed capacity of 16.7 MW in 1985. In 2006 it was increased to 17.7 MW after improvements were made in reinjection strategies, and in 2011 a new binary, bottoming-cycle plant was added, producing an additional 1.5 MW using the 205°F “waste” water from the existing double-flash geothermal plant. This latter project was funded by a $2 million DOE Recovery Act grant and an additional $4 million from private investors. The project provided 19 construction jobs in 2010 to a town with a population of 1,699 at the time.[6] The plant is currently owned by Beowawe Power, LLC and operated by Terra-Gen Power.

The given value was not understood.
For over 50 years, the Beowawe Geothermal field has been actively sought out and explored by many energy companies, large and small. A few of those companies, Magma Power Company, Vulcan Thermal Power Company, and Sierra Pacific Power Company drilled twelve exploratory geothermal wells between 1959 and 1965. Several of these drilled geothermal wells had temperatures of 406-414°F at depths of 700-800 feet, though the deepest of the wells was 2,050 feet. These exploration and drilling efforts also confirmed that the field is a geologically interrelated system.[7] Nearly a decade later, from 1974 to 1978, three more wells were drilled, one of them to a depth of 9,565 feet. Exploration drilling at Beowawe continued throughout the 1970’s and into the early 1980’s. This exploration drilling confirmed the presence of hot water and steam at shallow enough depths to sufficiently support the development of geothermal power. The Beowawe flash power plant came on line in 1985, producing 16.7 MW from a 392°F resource with initial temperatures as high as 420°F. In 2006 electrical production at the plant was 15.1MW gross and 13 MW net. After technical difficulties with reservoir pressure decline, new reinjection strategies were implemented, bringing the power output to a consistent 17.7 MW. Beowawe Power LLC/Caithness Operating Company signed a 20-year sales contract with Sierra Pacific Power Company starting in 2006 to supply 17.7 MW of power. Terra-Gen Power acquired the Beowawe holdings in 2010. A 1.5-MW binary bottoming-cycle plant, supplied by Ormat of Nevada, was developed by Terra-Gen Power and TAS Energy in 2010 and dedicated in 2011. This new plant was funded by an ARRA grant and private investments.

This article is a stub. You can help OpenEI by expanding it.

With the award of the $2 million USDOE ARRA grant and the industry match of $4 million, the 1.5 MW binary bottoming-cycle plant is on-line. Once the plant is fully operational it will provide nonproprietary data to the National Geothermal Data System (NGDS) and the Department of Energy Geothermal Technologies Program (DOE GTP) for a minimum of two years.

Use the "Edit With Form" menu option to add content

In 2011, the Beowawe plant was the first geothermal project funded under the American Recovery and Reinvestment Act (ARRA) to start generating power in a bottoming-cycle operation. The new low-temperature binary cycle plant uses waste heat from the geothermal brine of an existing geothermal plant at the facility. The new plant added approximately 2 megawatts of clean renewable energy capacity to the existing plant. The $2 million ARRA grant from DOE’s Geothermal Technology program will leverage an additional $4 million in private sector investment to support the projects at the Beowawe plant.

The given value was not understood.
In the first year of Beowawe’s operation, a reduction in temperature and pressure in the reservoir caused a noticeable decline in plant production. It was discovered that the spent brine was being injected outside of the geothermal reservoir. Without the reinjection, the reservoir suffered a loss of pressure, which allowed cold ground water to flow into and cool the geothermal reservoir. Eventually, the pressure was stabilized in the reservoir by the influx of cold water. In the next 8 years however, the cooling continued so significantly that it brought the temperatures of the wells down by 38°F and power production declined to about 12.5 MW by mid-1991. In July of 1991 a new, large production well was drilled and began production in an effort to cure the current situation, which increased the total flow rate from about 375 to 500 pounds per second (lbs/s) and restored full plant electrical output, but hastened the overall decline in pressure in the geothermal field. By 1993 the gross power output had declined again to about 15 MW.[9]

The problem was addressed by engineers and geologists by shifting to new injection strategies. The new strategy, undertaken in February 1994, involved switching injection to well 85-18, which was closer to the production wells and in much better hydraulic communication with the reservoir. The new injection provided more pressure support to the reservoir, slowing the influx of colder groundwater. This increased the combined flow rate of the three production wells to 4,090 gpm and reduced the decline rate of temperature over the course of the following two years. The plant resumed full output of 16.7 MW by the third quarter of 1994, but it again started to decline, starting at a rate of about 0.4 MW per year. By mid-1997 the rate of decline in gross power output slowed to approximately 0.15 MW per year, with negligible power decline by summer of 1998.[9] A number of studies, including a numerical model by GeothermEx in 2004 have evaluated the temperature decline and subsequent renewal of the Beowawe geothermal reservoir, giving a better understanding of subsurface fluid flow in the area. These studies make use of a wealth of historical data of reservoir pressures, non-condensable gas concentrations, enthalpy values, reservoir temperatures, and tracer test results to insure that the model closely represents the performance of the Beowawe reservoir. These studies helped increase the plant gross output to 17.7 MW by 2006. The success of these injection strategies and subsequent modeling has increased knowledge of geothermal reservoirs’ recharge and has improved the industry’s ability to overcome similar reservoir temperature and pressure declines in other development areas, especially in the Basin and Range.


Geology of the Area

The given value was not understood.

The Beowawe geothermal system in northern Nevada is a structurally controlled, water-dominated resource with a measured wellhead temperatures of 212°C and reservoir temperatures of up to 250°C as indicated by geochemical studies. Surface expression of the system consists of a large, active opaline sinter terrace that is present along a Tertiary to Quaternary normal fault escarpment. The area is underlain by a 950 to 1300 m thick section of Miocene dacite to basalt lava flows interbedded with tuffaceous sedimentary rocks overlie and are faulted against Ordovician Valmy Formation rocks, which host the reservoir. The Valmy Formation in the area consists of siltstone, quartzite, chert and argillite. Tertiary tuffaceous sedimentary rocks cap the system which is controlled by the intersection of the Malpais fault and a south dipping, N70"W trending fault. The fault intersection, which has probably formed a dilation breccia, plunges steeply to the west.[8]

Use the "Edit With Form" menu option to add content

Below is a list of Exploration that have been conducted in the area - and cataloged on OpenEI.

Retrieved from "https://openei.org/w/index.php?title=Beowawe_Hot_Springs_Geothermal_Area&oldid=939797"
Categories:
OpenEI is developed and maintained by the National Renewable Energy Laboratory with funding and support from the U.S. Department of Energy and a network of International Partners & Sponsors.