Isotopic Analysis- Fluid:
Isotopes are atoms of the same element that have different numbers of neutrons. An isotopic analysis looks at a particular isotopic element(s) in a given system, while the conditions which increase/decrease the number of neutrons are well understood and measurable. Fluid isotopes are used to characterize a fluids origin, age, and/or interaction with rocks or other fluids based on unique isotopic ratios or concentrations.
Other definitions:Wikipedia Reegle 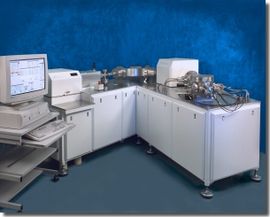 Isotope analysis is typically conducted by hydrologists, biologists, and geochemists. There are many different isotopes, but they all generally fall into two categories; radioactive or stable. Radioactive isotopes have known decay rates and half-lives, which are very useful for dating particular fluids or materials. Stable isotopes do not decay and are used to measure the ratios of the heavy isotope vs light isotope to reveal general conditions that would lead to this heavy/light isotope ratio. For example, oxygen isotopes have been used to understand paleoclimates by measuring the heavy oxygen (18O) vs light oxygen (16O) ratio. Knowing that the heavy isotope will be more difficult to evaporate from a body of water, it is possible to deduce the climate; high 18O will indicate a warmer climate because of a higher 18O:16O ratio. There are many applications of isotope geochemistry, some which have been utilized for geothermal exploration techniques. Isotopic analysis is useful as a geothermal exploration technique because it reveals information about the source of fluid and heat, age of fluids, and the overall spatial circulation of hydrothermal waters.

Use in Geothermal Exploration
The hydrothermal fluids circulating in a geothermal system have a unique signature that can be used to determine where that water came from, how old it is, whether it has mixed with other fluids, and which direction it is moving in. Various isotopic analyses provide certain information, for example, noble gases (He, Ne, Ar, Kr, and Xe) are good tracers for heat and fluid sources, origins, and reservoir properties. Fractionating elements (H, C, O, and N) are useful for identifying recharge, water/rock ratios, and chemical equilibrium temperatures.[2] Radioactive isotopes of certain elements (3H, 36Cl) encountered in groundwater may also be used to directly date waters from a geothermal reservoir. Isotopes can be measured in gas, water, or rocks samples, and their characteristics are used to identify important information regarding a hydrothermal system. Specific properties of the various isotopes used in geothermal exploration are discussed in the Physical Properties section of this page (below).

Analysis of 36Cl- isotopes and interpretation of 36Cl/Cl ratios of waters sampled from springs and drill holes in the Valles Caldera region indicated that deeply circulating meteoric waters derive their high chloride contents from Precambrian basement and Paleozoic rocks before ascending into more shallow volcaniclastic reservoirs, and that residence times for these waters are <100,000 years.[3] 36Cl/Cl ratios also confirm previous classifications of the sampled waters as meteoric or thermal waters established by previous stable isotope results.[4] Hydrogen isotope data have also been used at the Valles Caldera, NM to improve understanding of the hydrothermal system. Tritium (3H) concentrations obtained from steam condensed in a mudpot and from deep, hot (approx. 278°C) reservoir fluids from the Baca #13 geothermal well are 2.1 and 1.0 T.U., respectively.[5] The deuterium (2H) contents of the fumarole steam, deep reservoir fluid, and local meteoric water were practically identical, suggesting the steam is derived from a reservoir whose water is mostly >50 years old, and that the hydrothermal system is recharged by slow percolation of rainwater through fractures in and around the caldera’s resurgent dome.

Kennedy & Van Soest (2007) were able to correlate high 3He concentrations from surface waters with active crustal deformation.[7] These results enabled the identification of mantle-derived fluids at the surface, and are indicative of areas with high levels of crustal permeability or magmatic activity. At the Long Valley Caldera, CA, rising helium isotope ratios in fumaroles at Mammoth Mountain were also correlated with increased seismic activity in 1989, suggesting that recent magmatic intrusions contribute to the heat input of the present hydrothermal system.[8]

Field Procedures
Liquid and/or gas samples are collected in the field at the surface or from wellbores. The Water Sampling and Gas Sampling technique pages should be consulted for specific details regarding standard sampling procedures of fluids in the field.
Physical Properties
The given value was not understood.
Variations in bond strength result in mass-dependent isotopic fractionations as phase changes, fluid-rock reactions, and mineral precipitation occur in response to variations in temperature, pressure, and fluid chemistry.[9] The effects of fractionation are more pronounced for lighter elements, in which the mass differences between different isotopes of the same element are relatively large. Different compounds in equilibrium with one another will record different isotopic ratios as a result of mass-dependent fractionation, and the magnitude of these differences depends strongly on temperature. [9] These characteristics provide researchers with useful tools for interpreting isotope data from geothermal systems, based on the flux of different isotopes through various natural geochemical reservoirs. Chlorine is a common anion found in meteoric fluids and has three isotopes, two of which are stable and the third is radioactive. The two stable isotopes, 35Cl and 37Cl, are 12-15 orders of magnitude more abundant than the radioactive isotope, 36Cl.[10] The half-life of 36Cl is 301,000 years and has proven useful for dating fluids in hydrothermal systems and other quaternary hydrologic systems.

The two stable isotopes of carbon commonly measured in isotope geochemistry are 12C and 13C. The 13C/12C ratio is used as an indicator of paleoclimate, and records the amount of fractionation that occurs through photosynthetic activity in plants. The radioactive isotope of carbon is 14C, and is routinely used in dating of organic materials. Carbon-14 has a half-life of 5,730 +/- 40 years, and decays to nitrogen-14.

Oxygen has three naturally occurring stable isotopes. 16O is by far the most abundant, followed by 18O, and finally 17O. Measurement of oxygen isotope ratios can be used for a variety of applications. In geothermal exploration and reservoir evaluation, 18O:16O ratios are used to determine origins of fluids (meteoric or magmatic) and if there is mixing with other hydrothermal fluids in the system.

Hydrogen has three naturally occurring isotopes. 1H is the most abundant, accounting for 99.98% of the Earth’s hydrogen, and has a nucleus that consists of a single proton. 2H, also known as deuterium, is a comparatively rare stable isotope, comprising 0.0026-0.0184% (by population) of hydrogen samples on Earth. The lower end of this range is typically encountered in samples of hydrogen gas, whereas ocean water usually shows higher levels of enrichment. The radioactive isotope of hydrogen encountered in nature is 3H, also known as tritium. It has a half-life of 12.43 years,[11] and decays to the isotope helium-3 (3He). While small amounts of tritium form naturally through interactions between cosmic rays and atmospheric gases, the largest input of tritium in groundwater comes from atmospheric nuclear weapons testing, which began in 1952 and peaked in the mid-1960s.[12] This tritium bomb peak can be located through groundwater sampling to provide information on recharge rates of systems replenished by relatively young (<60 years) groundwater. More precise dating of groundwater can be performed through 3H/3He dating by comparing tritium concentrations to the amount of tritiogenic 3He in a sample.[13][14]

Helium has two stable isotopes, 3He and 4He, with the latter having a much higher abundance at the earth surface, and the former having an increasing concentration with depth. This has allowed scientists to use 3He as a method for determining the source of fluids, mixing of fluids, interactions with various lithologies at depth, and anomalous heat sources. 3He/4He ratios are typically reported as R/Ra, where R is the isotopic ratio of helium measured in the sample and Ra is the present isotopic ratio of helium in the atmosphere. Scientists studying geothermal systems have also found a relationship of 3He and enthalpy of a reservoir. 3He is expelled from a magma twenty times more efficiently than heat, allowing high 3He ratios to be indicative of a heat source at depth.[15]

Data Access and Acquisition
The given value was not understood. 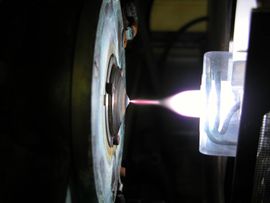 Photo of the plasma sampler from an ICP-MS system used by the Atomic Energy and Alternative Energies Commission (CEA), France. Photo from the CEA Website, last updated October 2, 2011.

Following collection, isotope data of a rock, liquid, or gas sample is analyzed using a mass spectrometer. A mass spectrometer is a device that is able to measure the composition of a sample and the mass-to-charge ratio of a particular element or molecule. First a sample is ionized, converting a fraction of the original sample into ions (charged particles)- there are numerous methods used for this process. The ions are then separated by the mass-to-charge ratio and measured by a sensitive instrument that is capable of detecting varying particle charges by magnetic sector, quadrupole, or time of flight. Finally the data is processed and plotted onto a spectra which displays the masses of the particles of that sample.

Schematic diagram of an ICP-MS system with metal speciation capability. Figure 1 from Caruso & Montes-Bayon (2003).[16]
Best Practices
The given value was not understood.
The applications of stable isotope geochemistry span all fields of the geosciences. Understanding of the fluxes of isotopes through different geochemical reservoirs is used to study many geological processes.[9] Based on these characteristics, and on the strong dependence of isotopic fractionation on temperature, stable isotopes can be used as a geochemical tracer in natural systems. The isotopic ratio of an element in rocks or other material can record the movement of elements through different geochemical reservoirs. If equilibrium conditions can be assumed, stable isotope ratios of two substances can also be used to approximate the temperature of exchange. This enables the application of certain chemical geothermometers.
Potential Pitfalls
Limitations of isotopic data and pitfalls in data interpretation are specific to the type of isotope data being considered. For example, there are several specific conditions that must be satisfied for precise determination of the age of a water sample using 3H/3He data (these parameters are explained in detail on the U.S. Geological Survey 3H/3He Dating Background webpage). A qualified hydrologist, geochemist, or geologist with sufficient background in isotope geochemistry should be consulted when interpreting isotope data.

Retrieved from "https://openei.org/w/index.php?title=Isotopic_Analysis-_Fluid&oldid=692561"
Categories:
OpenEI is developed and maintained by the National Renewable Energy Laboratory with funding and support from the U.S. Department of Energy and a network of International Partners & Sponsors.