Zeolitic Alteration:
Hydrothermal alterations in which minerals from the zeolite group are introduced
Other definitions:Wikipedia Reegle 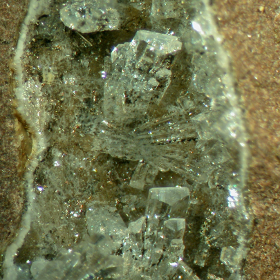 Zeolite minerals, including mordenite and clinoptilolite, have been identified in a number of caldera systems. These and other zeolite minerals are regionally extensive, and their formation is associated with late stage degassing of magmatic fluids and mixing with meteoric water.

Want to add an example to this list? Select a Geothermal Resource Area to edit its "Relict Geothermal Feature" property using the "Edit with Form" option.

CSV
Retrieved from "https://openei.org/w/index.php?title=Zeolitic_Alteration&oldid=943327"
Categories:
OpenEI is developed and maintained by the National Renewable Energy Laboratory with funding and support from the U.S. Department of Energy and a network of International Partners & Sponsors.