Leach Capping:
Zones of acid leaching in which all components of a rock have been removed except for silica
Other definitions:Wikipedia Reegle 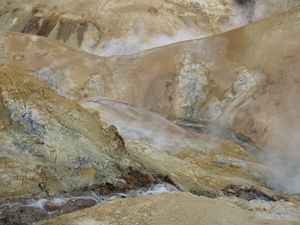 Often associated with deposition of alunite and bordered by halos of Advanced Argillic Alteration. Leach Cappings are zones of acid leaching in which all components of a rock have been removed except for silica. Such zones are typically encountered near the surface at the zone of principle hydrothermal upflow, where volatile gases condense into shallow groundwater to produce acidic solutions.

Want to add an example to this list? Select a Geothermal Resource Area to edit its "Relict Geothermal Feature" property using the "Edit with Form" option. CSV

Retrieved from "https://openei.org/w/index.php?title=Leach_Capping&oldid=943274"
Categories:
OpenEI is developed and maintained by the National Renewable Energy Laboratory with funding and support from the U.S. Department of Energy and a network of International Partners & Sponsors.