Type A: Magma-heated, Dry Steam Resource:
No definition has been provided for this term.

This classification scheme was developed by Brophy, as reported in Updating the Classification of Geothermal Resources.[1] 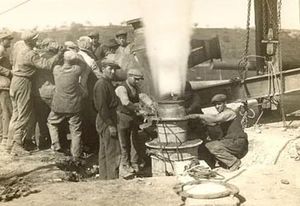 Larderello's dry steam geothermal field was the first geothermal resource to be utilized for electricity generation in 1911 (reference: reuk.co.uk)

The dry steam geothermal area at The Geysers in Northern California is the largest producer of geothermal energy in the world (reference: pubs.usgs.gov)

Dry steam resources are the simplest and most ideal resources for geothermal development as they utilize pure steam as opposed to liquid. They are also some of the rarest geothermal resources found because of the specific geologic conditions they require to develop.

Famous dry steam resources include the first geothermal field ever exploited for electricity (Larderello, Italy in 1911) and the largest producing field of geothermal energy on Earth (The Geysers in Northern California). The only other currently exploited dry steam resources are the Darajat and Kamojang fields in Indonesia, the Travale field in Italy, and the Matsukawa field in Japan.

According to Brophy, dry steam resources typically have the following properties:

Want to add an example to this list? Select a Geothermal Resource Area to edit its "Brophy Model" property using the "Edit with Form" option.

Retrieved from "https://openei.org/w/index.php?title=Type_A:_Magma-heated,_Dry_Steam_Resource&oldid=943317"
Categories:
OpenEI is developed and maintained by the National Renewable Energy Laboratory with funding and support from the U.S. Department of Energy and a network of International Partners & Sponsors.