Information current as of 2020
In Tennessee, a developer may need to obtain a Certificate of Public Convenience and Necessity (CCN) from the Tennessee Public Utility Commission (TPUC) to construct a generation or transmission facility. Tenn. Code Ann. §65-4-208(a). The TPUC regulates the construction of electric generating and transmission facilities primarily pursuant to Tennessee – Tenn. Code Ann. §65-4-201 et seq., Certificate of Public Convenience and Necessity and Tennessee – Tenn. Comp. R. & Regs. 1220-1-1, Rules of the Tennessee Regulatory Authority Rules and Regulations of Practice and Procedure. 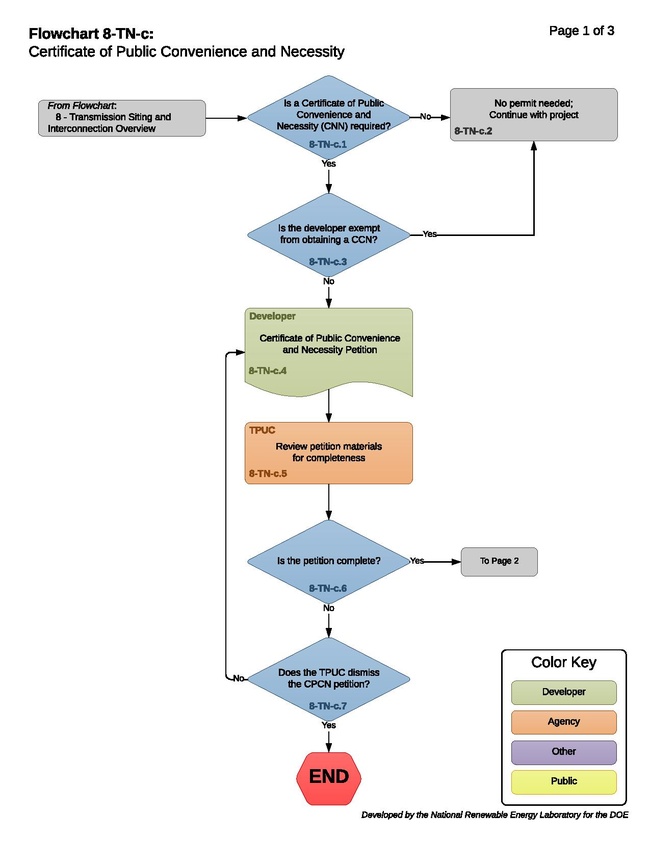 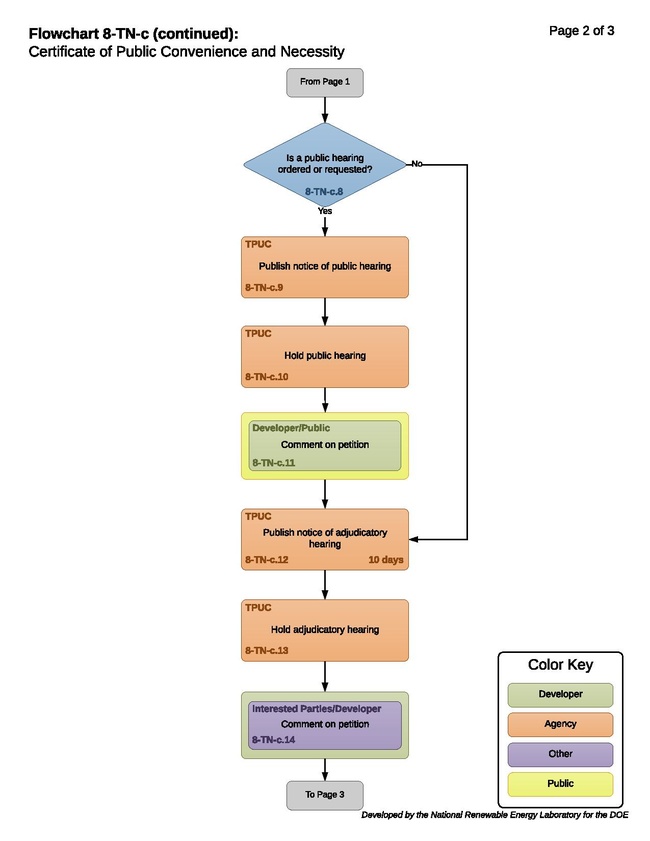 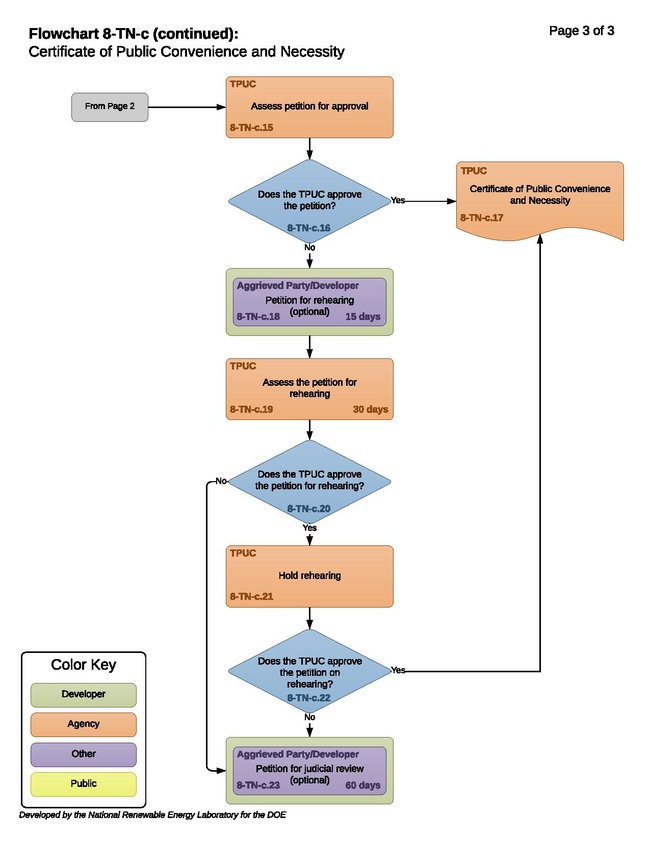 8-TN-c.1 to 8-TN-c.2 – Is a Certificate of Public Convenience and Necessity (CCN) Required?

A developer may need to obtain a Certificate of Public Convenience and Necessity (CCN) from the Tennessee Public Utility Commission (TPUC) prior to establishing or beginning the construction of, or operating any line, plant, or system, or route in or into a municipality or other territory. Tenn. Code Ann. §65-4-201(a). Specifically, a developer must obtain a CCN prior to:

A public utility is defined as an “individual, co-partnership, association, corporation, or joint stock company…that own[s], operate[s], manage[s] or control[s], within the state, any…electric light…[,]…power, …or any other like system, plant or equipment, affected by and dedicated to the public use, under privileges, franchises, licenses, or agreements, granted by the state or by any political subdivision.” Tenn. Code Ann. §65-4-101(6)(a).

8-TN-c.3 – Is the Developer Exempt From Obtaining a CCN?

A developer does not need to obtain a CCN if the developer is:

The developer must submit a complete CCN Petition (Petition) to the TPUC pursuant to Tenn. Comp. R. & Regs. 1220-1-1-.03. In addition to completing a Petition, the developer should also submit the following supporting documents, if applicable:

The TPUC reviews CCN Petitions for administrative and technical completeness. If a Petition is incomplete, the TPUC may dismiss the Petition without further consideration. Tenn. Comp. R. & Regs. 1220-1-1-.03(6).

After the adjudicatory hearing, the TPUC assesses the Petition and determines whether to grant the CCN.

In determining whether to grant or deny a CCN Petition, the TPUC assesses whether the public utility (developer) has the technical, managerial, and financial ability to provide the services for which it is applying.

If the proposed project will compete with another public utility’s existing “route, plant, line, or system,” the TPUC will not grant a CCN unless:

If the proposed project interferes with an existing “route, line, plant or system” of another public utility, the affected public utility may file a complaint with the TPUC. After a hearing, the TPUC may prescribe “terms and conditions” that are “just and reasonable” to address the interference. The TPUC may require that the developer follow such terms and conditions in order to keep and exercise the rights granted by the CCN. Tenn. Code Ann. §65-4-202.

Any party to a contested case may file a petition for rehearing within 15 days after the entry of an initial or final order. Tenn. Code Ann. §65-2-114.

Retrieved from "https://openei.org/w/index.php?title=RAPID/Roadmap/8-TN-c&oldid=980351"
Categories:
OpenEI is developed and maintained by the National Renewable Energy Laboratory with funding and support from the U.S. Department of Energy and a network of International Partners & Sponsors.