Information current as of 2019
In Tennessee, a person (developer) may need a Construction Stormwater General Permit (“General Permit”) from the Tennessee Department of Environment and Conservation (“TDEC”) for construction projects that disturb one or more acres of land or are part of a common plan of development or sale that will disturb one or more acres of land, in compliance with the National Pollutant Discharge Elimination System (“NPDES”) of the Clean Water Act (“CWA”). Tennessee implements the state’s NPDES program in T.C.R.R. §0400-40-10. TDEC issues General Permits to developers pursuant to T.C.A. §69-3-1.

Note: Projects that disturb less than one acre of total land may still need to obtain authorization under the General Permit if: 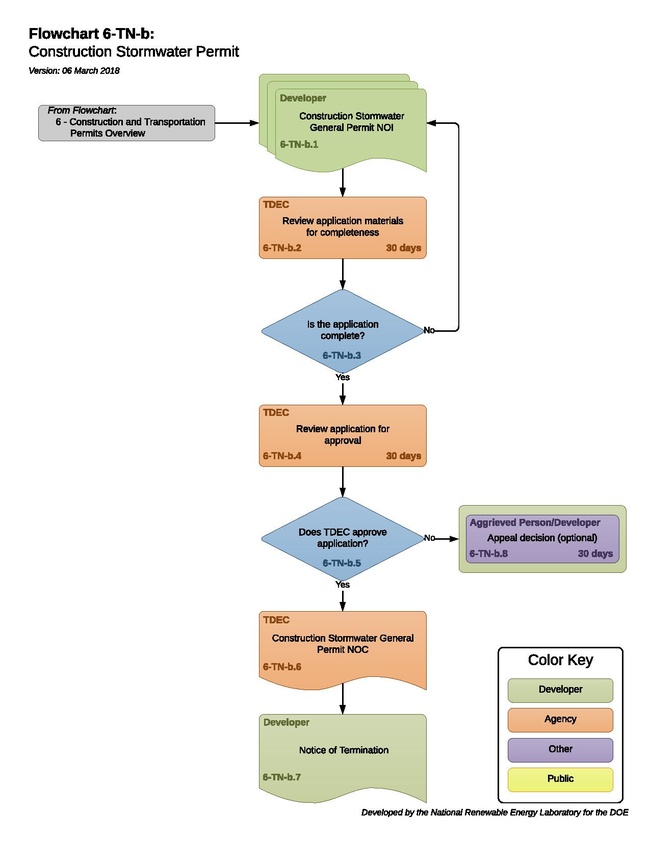 The developer must submit a Construction Stormwater General Permit Notice of Intent (“NOI”) to the appropriate TDEC Environmental Field Office at least 30 days before beginning construction activities. The NOI must include:

The developer must also submit an Application fee. The Application fee varies depending on the size of the proposed project. The appropriate fees and fee schedules can be found in T.C.R.R. §0400-40-11. TDEC Construction Stormwater General Permit.

After receiving an NOI, TDEC reviews the NOI for administrative and technical completeness. If the NOI is incomplete, TDEC notifies the developer within thirty (30) days of changes that must be made to the NOI. TDEC Construction Stormwater General Permit.

After receiving an NOI, TDEC has thirty (30) days to either issue a Notice of Coverage (“NOC”), deny coverage under the General Permit, or request additional information from the developer. Depending on the information provided by the developer in the NOI, TDEC may investigate the proposed project for potential impacts to the waters of the state. TDEC Construction Stormwater General Permit.

The developer must also perform inspections at least two (2) times a week of the construction site, and document the inspection on TDEC Inspection Certification Form. Inspections must be conducted at least seventy-two (72) hours apart from one another, and must be completed by an inspector that has an active certification by completing TDEC’s Fundamentals of Erosion Prevention and Sediment Control Level 1 course. The developer must keep copies of these inspection forms and provide them to TDEC upon request. TDEC Construction Stormwater General Permit.

In order to terminate coverage under the General Permit, the developer must submit a Notice of Termination (“NOT”) to the appropriate TDEC Environmental Field Office. Coverage can only be terminated if one of the following conditions occur at the project site:

If the developer or aggrieved person disagrees with the approval, denial, or the terms and conditions of a General Permit the person or developer may request a review of TDEC’s decision by the Tennessee Board of Water Quality, Oil and Gas within thirty (30) days of TDEC’s decision. The review is conducted pursuant to T.C.A. §69-3-105. T.C.R.R. §0400-40-05-.12.

Retrieved from "https://openei.org/w/index.php?title=RAPID/Roadmap/6-TN-b&oldid=967213"
Categories:
OpenEI is developed and maintained by the National Renewable Energy Laboratory with funding and support from the U.S. Department of Energy and a network of International Partners & Sponsors.