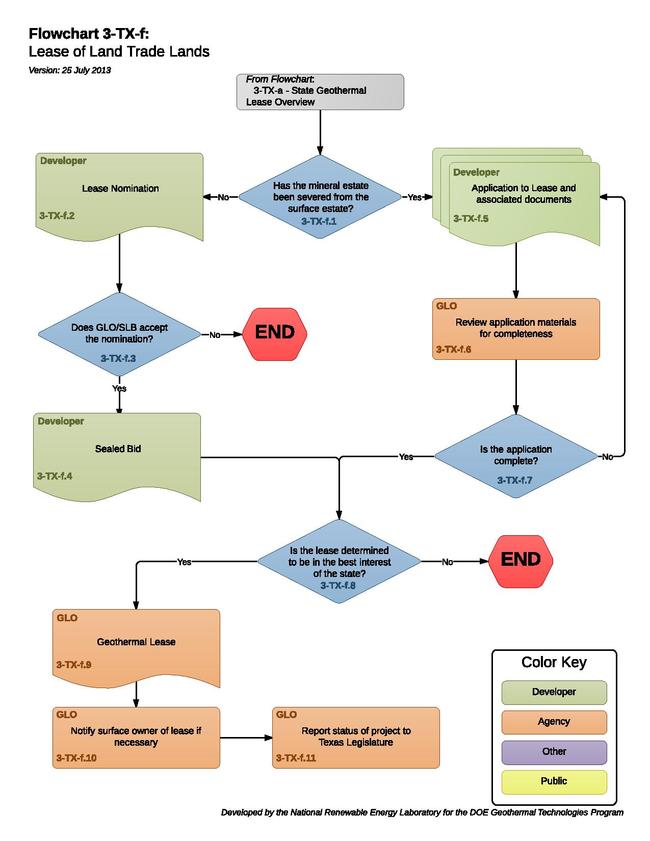 3-TX-f.1 – Has the Mineral Estate Been Severed from the Surface Estate?

All fee tract geothermal leasing must go through a bid sale process. A "fee tract" in Texas means that the mineral estate and the surface estate have been severed (commonly known as a “split estate”). Areas where the estates have not been severed will go through a regular leasing process through the GLO.

The GLO holds four mineral lease sales each year. In order to request that a state-owned tract be offered at a lease sale, the tract must be nominated. The developer must submit nominations in writing by the deadline set prior to each lease sale.

The developer is required to submit a $100 fee with any nomination they submit. Nomination fees are non-refundable. 31 TAC 151.2

The GLO may choose to accept or reject a nomination to place a tract up for bid.

After the GLO has received a sealed bid it may not be revoked or withdrawn by the developer. The bid must include a separate check for an amount equal to 1.5% of the bid payable to the commissioner as a special fee. If the developer is unsuccessful in getting the lease, this special fee will be refunded.

If the developer is successful with their bid, but fails or refuses to make payment within 30 days the developer is not entitled to a sale of or lease on the tract covered by the bid and the cash bonus will be forfeited automatically. The SLB then has the option to offer the tract to the next highest bidder. 31 TAC 151.2(d).

The developer must provide a completed application. An application to lease must include:

The GLO will review the application materials to ensure that all necessary components are present.

The GLO may request that the developer submit additional information in order to fully evaluate the application.

3-TX-f.8 – Is the Bid/Lease Determined to be in the Best Interest of the State?

The GLO may reject a lease if it determines that it is not in the best interest of the state. The GLO will consider:

The geothermal lease must be in a form prescribed and furnished by the GLO and must include the provisions the commissioner considers necessary for the protection of the interests of the state. When the application to lease is approved, a lease will be prepared with the appropriate terms and conditions, signed by the commissioner, affixed with the seal of the GLO, and delivered to the developer.

During the first 30 days of each regular session of the legislature, the commissioner must report on the status of the exploration, development, and production of geothermal energy and associated resources under the land governed by Tex. Nat. Rec. Code Sec. 141 Subchapter C. ( TNRC Sec. 141.079).

Retrieved from "https://openei.org/w/index.php?title=RAPID/Roadmap/3-TX-f&oldid=887374"
Categories:
OpenEI is developed and maintained by the National Renewable Energy Laboratory with funding and support from the U.S. Department of Energy and a network of International Partners & Sponsors.