The Alaska Division of Oil and Gas within the Alaska Department of Natural Resources oversees the geothermal resource leasing process in the State of Alaska. The process is essentially a two pronged approach to leasing lands, either competitive or noncompetitive. Competitive leasing occurs when multiple parties are bidding for the development of a certain tract of land. Noncompetitive leasing occurs through a geothermal prospecting permit when there is little interest in the initial call for applications by DO&G. In either process, the surface owner (if other than the state) will have a preference right to either match the high bid or to obtain their own prospecting permit should they choose to do so.

More information on the geothermal leasing process and information on current lease sales by DO&G, including public notice of applications, can be found on the ADNR Geothermal Leasing webpage. 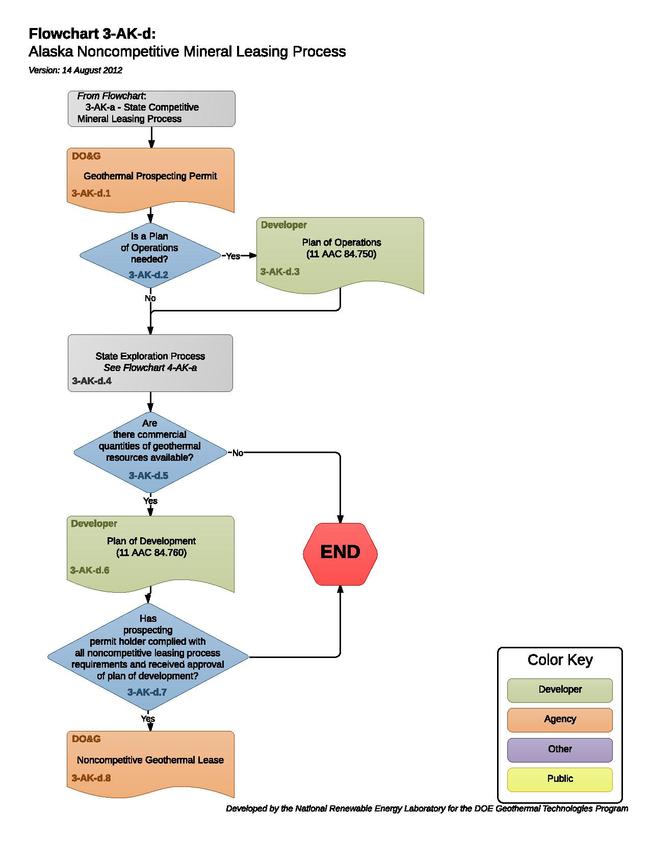 DO&G will issue a noncompetitive geothermal prospecting permit for an initial 2-year term to the surface owner exercising their preference right under AS § 38.05.181(a), or to a person who submits an application for a tract subject to a call for applications, if the tract is not designated for competitive leasing ( 11 AAC 84.730). The DO&G may renew a geothermal prospecting permit once for an addition one-year term if the permittee has exercised reasonable diligence but been unable to show a discovery or commercial geothermal resources. An application for a prospecting permit renewal must be submitted no later than 60 days prior to the date on which the original permit is set to expire and be accompanied by a copy of all geothermal survey date obtained from the lands under the permit ( 11 AAC 84.730).

11 AAC 84.730 defines “reasonable diligence” as “the performance of at least $50 per acre worth of drilling, geological, geochemical, or geophysical work on the permit area for the benefit of the permit area during the initial two-year term.” The developer should consult the Alaska State Exploration Process before beginning any exploratory procedures under their geothermal prospecting permit.

Note: the prospecting permit is also referred to as a "geothermal exploration permit" in 11 AAC 87.030 and in Flowchart 4-AK-a.

If the surface estate is owned by a party other than the state, the operator must notify the surface owner of their opportunity to request that DO&G require a plan of operation before allowing any activity to take place on the lands ( 11 AAC 84.750 and 11 AAC 84.870).

The holder of a geothermal lease or prospecting permit should provide full payment of all damages sustained by the owner of the surface estate by reason of their entering the land. An application for approval of a plan of operations must contain the following information along with statements and maps or drawings setting out the following ( 11 AAC 84.750 and 11 AAC 84.870):

3-AK-d.5 - Are there Commercial Quantities of Geothermal Resources Available

After exploration of the permitted tract(s), the developer should determine if there are commercial quantities of geothermal resources available to develop. If there are, the holder of the Geothermal Prospecting Permit will have a preferential option to gain a noncompetitive geothermal lease. The permit holder does not have to go though the competitive bidding process should they meet all of the requirements.

A prerequisite to obtaining a noncompetitive geothermal lease is the completion of a plan of development for any proposed geothermal development prior to commencing commercial production ( 11 AAC 84.740). Although a competitive lease will be issued before the plan of development is required, the noncompetitive lease process requires that this plan be developed for DO&G review before the lease execution. The developer should consult 11 AAC 84.760 for all of the required information to be included in the plan for development.

3-AK-d.7 - Has Prospecting Permit Holder Complied with all Noncompetitive Leasing Process Requirements and Received Approval of Plan of Development

According to 11 AAC 84.740, the Commissioner of DO&G will issue the noncompetitive lease to the geothermal prospecting permit holder if the permittee has:

If the term of the geothermal prospecting permit expires while the commissioner is reviewing an application for a noncompetitive geothermal lease, the permit may be extended until the permittee is either granted or denied the lease ( 11 AAC 84.740).

“Commercial quantities” is defined to mean quantities sufficient to yield returns in excess of operating costs, even if drilling and equipment costs may never be repaid and the whole undertaking may be ultimately a loss.

If the prospecting permit holder is issued the noncompetitive geothermal lease, they must then meet all bonding requirements set forth in 11 AAC 84.790 and pay the required annual rental. The bond amount will be determined by DO&G, but will be no less than $10/acre or $10,000, whichever is greater. The bond covers any potential surface-damage and will be released back to the developer under the following conditions:

Statewide bonds do not satisfy the requirement of the surface-damage bond required for geothermal operation here but may be considered by DO&G when setting any amount of additional bond required ( 11 AAC 84.790).

Royalties & Payments All geothermal leases are subject to an annual rental, payable in advance, or $3/acre. The rental for the year will be credited against royalties during that year as a minimum payment for the geothermal lease ( AS § 38.05.181(e)).

Every geothermal lease will be conditioned on the payment of a royalty by the lessee of not less than 10% but no more than 15% of the gross revenues derived from the production, sale, or use of geothermal resources. Royalties may be taken in kind, rather than in value if DO&G determines that it would be in the best interest of the state ( AS § 38.05.181(g)).

Retrieved from "https://openei.org/w/index.php?title=RAPID/Roadmap/3-AK-d&oldid=941208"
Categories:
OpenEI is developed and maintained by the National Renewable Energy Laboratory with funding and support from the U.S. Department of Energy and a network of International Partners & Sponsors.