Land Use Plans (LUPs) are used by state and federal agencies to manage public lands and they form the basis for every action and approved use of those lands. Different agencies will refer to LUPs by different names, but all LUPs serve the same purpose; to dictate what actions can and cannot be taken on the managed unit of land. Non-conforming uses require a LUP be amended or revised before a right-of-way or special use permit can be authorized.

In addition, some state and local land may be governed by state LUPs. A developer should check to see if a LUP is applicable to the project site, and if so, whether the LUP allows for utility-scale solar development. If the LUP does not allow for utility-scale solar development, the developer should initiate the state or local land use plan amendment process.

The Bureau of Land Management (BLM) administers roughly 258 million acres of public lands and 700 million acres of mineral estates in the United States. BLM’s land use planning authority is found in the Federal Land Policy and Management Act of 1976 (FLPMA) and many other public laws. FLPMA requires the BLM to develop and maintain LUPs called Resource Management Plans (RMPs) that cover individual planning units.

The BLM’s RMPs form the basis of every action and approved use on BLM managed public lands. The BLM prepares RMPs for areas of public lands, called planning areas, which tend to have similar resource characteristics. Planning emphasizes a collaborative environment in which local, state, and tribal governments, the public, user groups, and industries work with the BLM to identify appropriate multiple uses of the public lands. Plans are periodically revised as changing conditions and resource demands require.

About 192 million acres of lands are managed by the United States Forest Service (USFS) in accordance with the requirements of the National Forest Management Act of 1976. The LUPs, called Land Management Plans (LMPs), are prepared and implemented for each National Forest. The USFS LMPs identify areas administratively open for leasing and whether those areas should be leased. 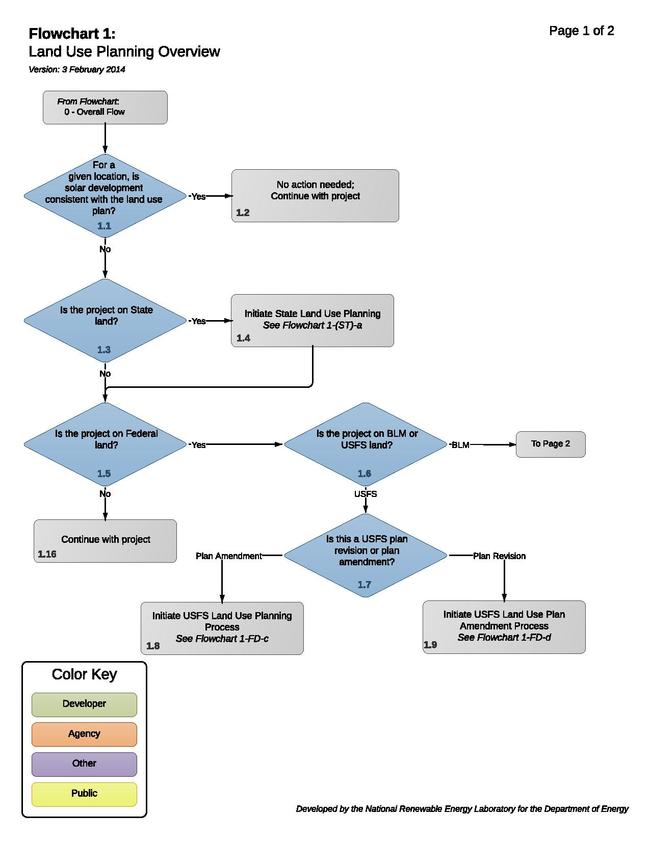 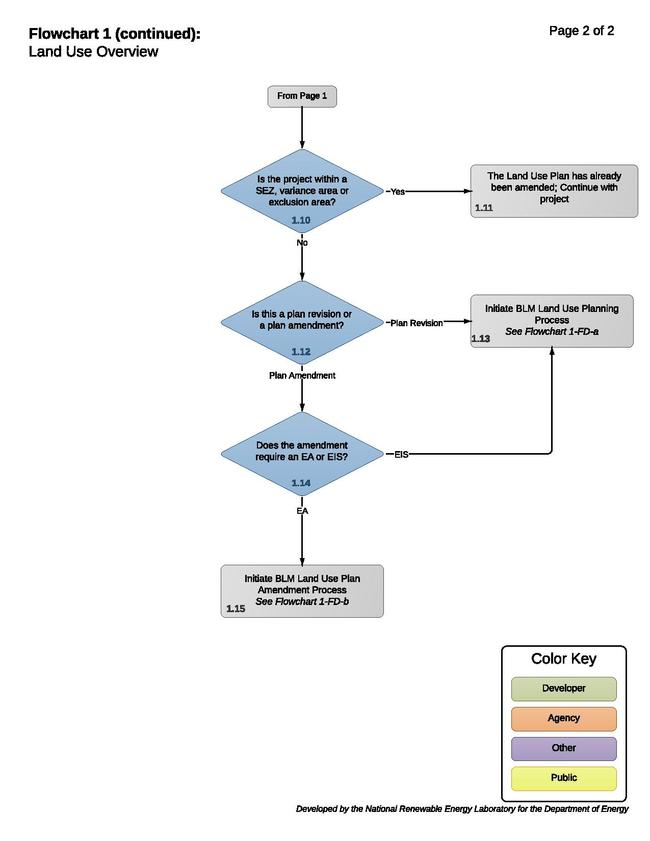 1.1 to 1.2 – For a Given Location, Is Solar Development Consistent with the Land Use Plan? No Action Needed, Continue With Project

1.3 to 1.4 - Is the Project on State Land? Initiate State Land Use Planning

Some state land may be governed by state LUPs. A developer should check to see if a LUP is applicable to the project site, and if so, whether the LUP allows for utility-scale solar development. If the LUP does not allow for utility-scale solar development, the developer should initiate the state land use plan amendment process.

The Forest and Rangeland Renewable Resources Planning Act of 1974, as amended by the National Forest Management Act of 1976 (NFMA) requires the USFS to plan, develop, amend and revise LMPs for National Forest System units. The BLM is required to develop, maintain, and revise land use RMPs by sections 201 and 202 of the Federal Land Policy and Management Act of 1976 (FLPMA). In both cases, the proposed use must be consistent with the LUP, or the RMP respectively, or the right-of-way application will be denied. See 36 CFR 219.15(d) ; 43 CFR 1610.5-3.

1.7 - Is This a USFS Plan Revision or a Plan Amendment?

Changes to a forest plan require either a revision or an amendment. A revision creates a new plan for an entire plan area while an amendment adds, modifies or removes one or more plan components. Both revisions and amendments will require some type of National Environmental Policy Act (NEPA) analysis. The USFS regulations regarding plan revisions can be found at 36 CFR 219.7. The revision process includes public participation, an assessment (as defined by 36 CFR 219.6), development of a revised plan and promulgation of a new plan. In addition, plan revisions always require an Environmental Impact Statement (EIS). Regulations regarding plan amendments can be found at 36 CFR 219.13. Plan amendments may be made at any time and must be based on a preliminary identification of the need to change the plan. The preliminary identification may be based on new information, changed conditions or changed circumstances. In addition, the USFS is required to provide an opportunity for public participation and to conduct a NEPA analysis. Unlike a plan revision, a plan amendment need not include an EIS. Environmental Assessments (EAs) and Categorical Exclusions (CEs) may suffice, depending on the nature of the amendment. Although both processes are included in this roadmap, as a general rule, utility-scale solar development will only require a plan amendment.

1.10 to 1.11 – Is the Project Within a SEZ, Variance Areas, or Exclusion Area? The Land Use Plan Has Already Been Amended; Continue with Project

RMPs are changed by either a plan amendment or a plan revision. The revision and development processes are the same, while the amendment process varies, depending on the level of environmental analysis required.

Plan amendments are most often prompted by the need to:

Amending an RMP involves changing one or more of the plan’s components. An amendment is initiated when a proposed action requires a change in terms, conditions and decisions of the approved plan. All amendments to RMPs must comply with NEPA. In some cases, NEPA compliance requires the BLM to prepare an Environmental Impact Statement (EIS) for the proposed amendment. If an EIS is required, the amendment process will be identical to the revision process. Unlike plan revisions, however, an amendment to an RMP may not require an EIS where a Categorical Exclusion (CE) applies or where after conducting an EA, the agency issues a Finding of No Significant Impact (FONSI).

RMP revisions involve preparation of a new RMP to replace an existing one. See 43 CFR 1610.5-6. RMP revisions are necessary if monitoring and evaluation findings, new data, new or revised policy, or changes in circumstances indicate that decisions for an entire plan or a major portion of the plan no longer serve as a useful guide for resource management. An EIS is always required for a plan revision. Utility-scale solar development will generally require a plan amendment rather than a plan revision.

Retrieved from "https://openei.org/w/index.php?title=RAPID/Roadmap/1_(1)&oldid=962278"
Categories:
OpenEI is developed and maintained by the National Renewable Energy Laboratory with funding and support from the U.S. Department of Energy and a network of International Partners & Sponsors.