Information current as of 2020
In Alaska, a person (developer) must cease all disturbance activity if human remains are discovered during project construction and report any such discovery to a peace officer until such remains are evaluated by a state medical examiner and/or field archaeologist.

The State Medical Examiner Office in the Alaska Department of Health and Social Services has jurisdiction over all human remains in Alaska (with rare exceptions, such as military aircraft deaths), regardless of age. Alaska Stat. § 12.65.005 – 12.65.100. The State Medical Examiner Office often works in conjunction with the Division of Parks and Outdoor Recreation – Office of History and Archaeology (OHA) because of OHA’s experience with controlled excavation and its expertise in evaluating the context of human remains.

The site of discovered remains should be regarded as a potential crime scene until a person with appropriate expertise and authority determines otherwise. It is unlawful to intentionally disturb a grave or destroy or remove any human remains from any lands within the state of Alaska without authorization, or to disturb historic, prehistoric or archaeological resources from State lands. Alaska Stat. § 11.46.482(a)(3); Alaska Stat. § 41.35.200.

The OHA recommends that developers establish a Programmatic Agreement (PA), Memorandum of Understanding (MOU), or Memorandum of Agreement (MOA) with other involved parties, such as state or federal agencies and landowners, before construction begins so that there is an established procedure in place for the site if human remains are discovered. However, the remains and a surrounding buffer area should not be disturbed until appropriate reporting and consultation have occurred. 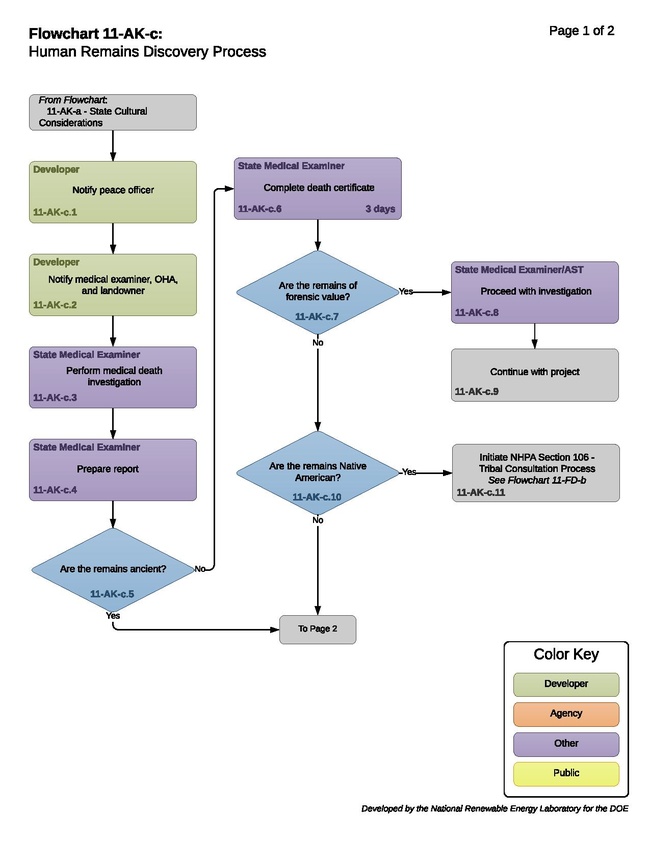 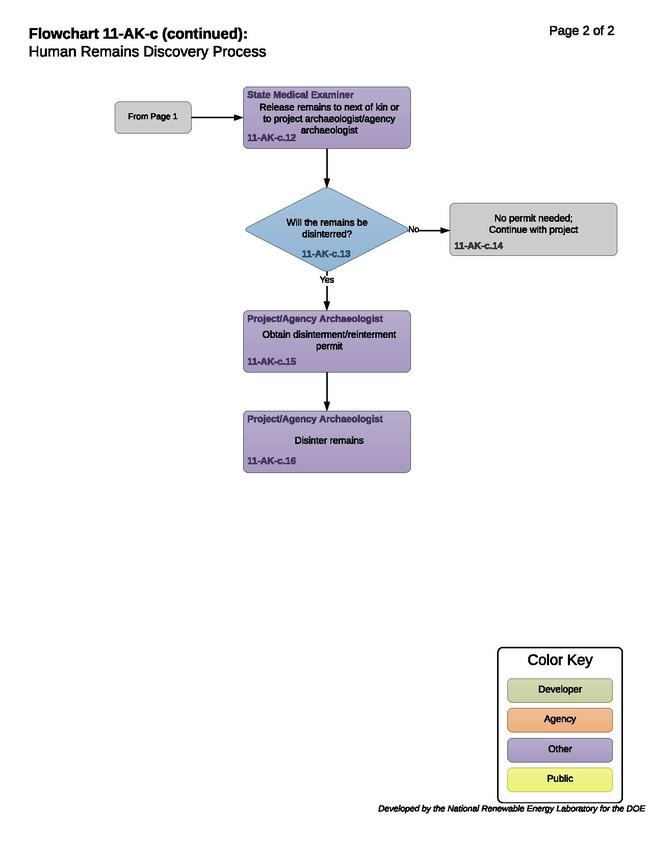 Any person who discovers on any land in Alaska a body whose death appears to have “been caused by unknown or criminal means” must immediately notify a peace officer (such as a police officer, Village Public Safety Officer, or Alaska State Trooper (AST)), the State Medical Examiner, the Office of History and Archaeology (OHA), and the landowner. Alaska Stat. § 12.65.005. The AST has interpreted notification procedures as applicable to all remains, including ancient remains.

The body may not be moved or otherwise be disturbed without the permission of the state medical examiner. Alaska Stat. § 12.65.005(c).

If the state medical examiner’s investigation requires the remains to be disinterred and transported to a facility at which a post mortem examination will be conducted, the state medical examiner must obtain a Disinterment/Reinterment Permit and Burial Transit Permit from the Division of Public Health – Bureau of Vital Statistics in the Alaska Department of Health and Social Services. Alaska Stat. § 18.50.250; Alaska Admin. Code tit. 7 § 05.540.

After the medical examiner has completed an investigation or conducted the appropriate inquiry, the examiner prepares a report of his findings and conclusions. Alaska Stat. § 12.65.020(b).

If the medical examiner’s findings and conclusions indicate that the death may have been caused by criminal means, the state medical examiner must submit a copy of the report to the district attorney responsible for the location at which the body was found. Alaska Stat. § 12.65.020(b).

Once the remains are determined to be of forensic value, the state medical examiner and AST will proceed with the investigation.

The project may continue after any criminal investigation involving the area where the remains were found is complete.

If the human remains are found on state land and determined to be Native American, the developer must work with the agencies involved to contact the regional and local native groups. Native American human remains found on any lands in Alaska, including state lands, are subject to the Native American Graves Protection and Repatriation Act (NAGPRA) of 1990 if the remains are to be curated in any institution that receives federal funds. Additionally, because most Alaska state agencies receive federal funds, these agencies must also follow the NAGPRA process. For more information, see:

Isolated human remains discovered without any context are typically excavated to determine if they are recent and possibly a victim of a crime, and to try to determine ethnicity. Human remains discovered in known contexts, such as on the edge of cemeteries or in known village or other archaeological sites, may be left in place if, in the opinion of the parties involved, the remains are best left undisturbed.

Prior to the excavation, movement and reinternment of ancient human remains, the project/agency archeologist must obtain a disinterment/reinternment permit from the Alaska Bureau of Vital Statistics. Alaska Admin. Code § 05.540.

The project may continue after the remains have been disinterred.

Retrieved from "https://openei.org/w/index.php?title=RAPID/Roadmap/11-AK-c&oldid=980763"
Categories:
OpenEI is developed and maintained by the National Renewable Energy Laboratory with funding and support from the U.S. Department of Energy and a network of International Partners & Sponsors.