Moving and treating water for thermoelectric power, irrigation, industrial use, and public water supply can be energy intensive, consuming 4% of the total electricity generated in the United States. Congressional Research Service – Energy-Water Nexus: The Water Sector’s Energy Use. Moving water is particularly energy intensive in the West— in some instances large quantities of water are pumped over long distances and significant elevations. National Resources Defense Council – Energy Down the Drain: The Hidden Costs of California’s Water Supply. For example, a 2005 California study estimated that 19% of the state’s electricity consumption was related to moving water. California Energy Commission – Statewide Small Hydropower Resource Assessment. About 355 billion gallons of water are withdrawn daily from U.S. surface and groundwater sources and large uses of the water include thermoelectric power generation, irrigation, industrial use, and public supply (municipal water use). United States Geological Survey – Estimated Use of Water in the United States in 2010.

Some of this energy can be economically recaptured through energy recovery hydropower, harnessing mechanical energy from existing pressurized water supply pipelines. The primary market driver for energy recovery hydropower is the opportunity for water system operators to lower operational costs by offsetting energy costs with on-site hydropower generation. Unlike other hydropower technologies, there has not yet been a comprehensive national assessment of the potential for energy recovery hydropower, although there have been related federal and state assessments for conduit hydropower generally. A 2014 Oak Ridge National Laboratory study identified approximately 1–2 GW of untapped hydroelectric potential at existing conduits, of which 104 MW was at 373 U.S. Bureau of Reclamation - owned canals. Oak Ridge National Laboratory – Opportunities for Energy Development in Water Conduits.

…hydropower built using an existing, pressurized, manmade water conveyance that is already diverting water from a natural waterway for the distribution of water for agricultural, municipal, or industrial consumption and not primarily for the generation of electricity.

The Hydropower Regulatory Efficiency Act of 2013 defines a “conduit” as “any tunnel, canal, pipeline, aqueduct, flume, ditch, or similar manmade water conveyance that is operated for the distribution of water for agricultural, municipal, or industrial consumption and not primarily for generation of electricity.”

The federal regulatory process for energy recovery hydropower was substantially reformed in August 2013 when Congress passed the Hydropower Regulatory Efficiency Act of 2013 (HREA). HREA amended Part I of the Federal Power Act (FPA), creating a category of hydroelectric facilities that do not require a Federal Energy Regulatory Commission (FERC) license or exemption from licensing. These previously licensed facilities may now qualify for a new FERC Notice of Intent (NOI) process that can be completed in as little as 60 days. HREA removed “qualifying conduit facilities” from FERC licensing jurisdiction under 30(a) of the FPA (i.e., non-jurisdictional) and replaced the licensing/exemption process with a 60-day NOI process. In order to qualify for the qualifying conduit NOI process, the facility must:

The primary market driver for energy recovery hydropower is the opportunity for water system operators to lower operational costs by offsetting energy use costs with on-site hydropower generation. Projects installed behind the meter, offsetting electricity costs at a full retail rate via net metering, are likely to be particularly economically attractive compared to projects seeking to sell energy into wholesale electricity markets, where prices are currently relatively low. For example, water treatment plants typically have an existing electricity load that may be offset with on-site hydropower generation through net metering. Based on FERC data regarding approved NOIs for qualifying conduits, energy recovery hydropower project development has been particularly active in western states. As of August 2017, a total of 87 qualifying conduit applications from 14 states had been approved by FERC since HREA became law in August 2013. Approved projects range in size from 2 kW to 4.8 MW and have a total cumulative capacity of almost 32 MW. Projects are primarily municipal or agricultural. 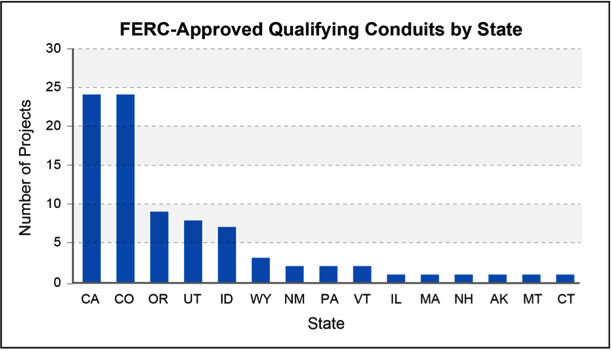 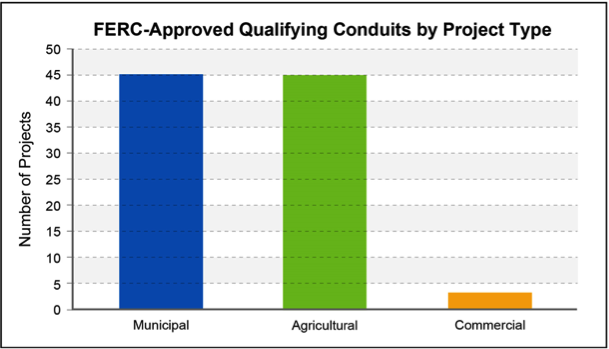 Energy recovery hydropower projects can be grid-tied or grid-independent. Because grid interconnection is one of the triggers for FERC jurisdiction, prior to HREA, there was an incentive for projects to remain grid-independent in order to avoid FERC licensing requirements. Typical energy recovery hydropower project types include municipal water supply projects and agricultural projects.

The U.S. agricultural industry includes a vast network of water infrastructure, which transports water for farms and ranches used for irrigation and related agricultural purposes. Some of the energy contained in water movement for agricultural purposes can be recaptured through energy recovery hydropower. According to analysis commissioned by Colorado Energy Office, irrigation for farming in Colorado and its associated electricity costs are one of the largest areas of energy consumption in Colorado. Colorado farmers report spending an average of roughly $33,000 per year on electricity, while spending an average of $16,000 on diesel and $8,000 on gasoline. Electricity costs to power irrigation pumps typically make up more than 50% of total electricity expenses. Colorado Energy Office – Colorado PRV–Hydropower Assessment.

Retrieved from "https://openei.org/w/index.php?title=RAPID/Best_Practices/Energy_Recovery_Hydropower&oldid=957705"
Categories:
OpenEI is developed and maintained by the National Renewable Energy Laboratory with funding and support from the U.S. Department of Energy and a network of International Partners & Sponsors.