When siting a proper location for a solar facility, there are many factors to consider—from avoiding environmentally sensitive areas and working with local landowners to exploring previous land use.

Construction activities at most large-scale, ground-mounted installations of photovoltaic (PV) arrays are preceded by land clearing and re-grading to standardized slope and surface conditions to facilitate construction access, racking installation, and facility operations and maintenance (O&M). The impact to existing vegetation may be total eradication followed by installation of a gravel cover and subsequent application of herbicides. NREL cost modeling estimates that grading practices can account for 3-6% of total installed capital costs of utility-scale solar projects, and all conventional site preparation practices are expected to account for 20% of total utility-scale PV installed costs by 2020 (DOE, 2012).

The first step in the solar design process is to pick a location for where to site a solar facility. Many factors will influence this decision, that include, but are not limited to: solar resource quality, distance to transmission lines, land ownership and rights, previous land-use, local workforce considerations, and environmental limitations. Picking the optimal location can reduce upfront costs to solar developers, ensure community acceptance of the new solar facility, and reduce environmental impacts. During the siting process, developers need to balance costs and risks (environmental, public opinion, cost, etc.) for successful project development. 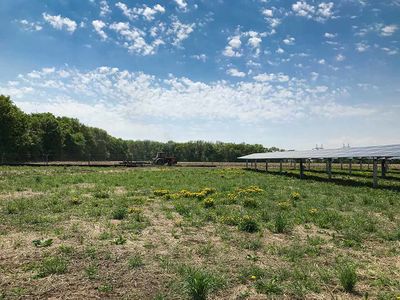 A solar project sits on an active farm. Photo by Jordan Macknick

Previous land use considerations can impact the solar siting process. Land types can be broken up into:

All of these different sites have benefits and drawbacks that are discussed below. 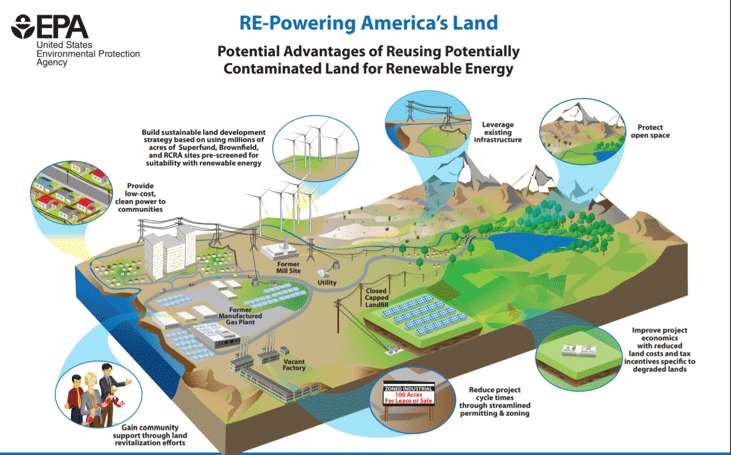 Siting solar on contaminated land can have environmental and economic benefits.
Photo from EPA

Siting solar on contaminated lands can results in environmental and economic benefits. Through reuse of these sites, communities see a property that has been vacant and or underutilized for many years turned into a facility that may help improve the local tax base, create jobs and turn blight into an economic opportunity.

This approach not only uses the land but transforms a potential liability into an asset that will serve the community. The economic benefits often mentioned for solar on contaminated lands are electricity cost savings, additional land lease revenue to the town or city site owner, and increased tax payments for the land and/or solar power system to the local municipality and/or state.

Cost savings can vary across installations, since they are determined by tax and solar energy incentives, renewable energy policies such as Renewable Portfolio Standards, local electricity rates, and power purchase agreement (PPA) terms. In some cases the site owner agrees to lease the land to the renewable energy developer at a low rate in exchange for reduced electric charges or for other terms. Other benefits associated with developing solar on contaminated lands include the use of local resources to construct these projects and the economic revitalization of an area.

Contaminated lands may also lead to risk and liability for the developer that may raise costs or impact project viability at the site. The permitting process for contaminated lands is often more time intensive due to involvement of many permitting agencies (federal, state, county, etc.). Often, previously contaminated lands will carry design and construction implications. For example, on capped landfills, the only stable soil may be 6-12” below the surface that may change the racking design for the site (i.e. a developer may have to use concrete blocks rather than driven posts). When disturbing soil, past environmental contaminants may pose health risks to construction contractors that may facilitate costly safety measures to reduce impact on human health.

Siting a solar facility at a brownfield site can allow for use of land that is underutilized and provide a diversified revenue source for landowners through leasing payments or land sales. Purchasing and leasing brownfield lands can often be cheaper for developers than other land types which can improve the economics of a solar project. The environmental permitting process can also be expedited on previously disturbed lands due to a reduction in native vegetation and animal habitat on site. On top of that, use of brownfield sites can reduce the impact of PV on other types of land use or habitat such as farmland or prime species habitat. Siting solar on abandoned lots can provide a new revenue source for land owners and provide electricity close to urban populations, while reducing land change impacts on species. Also, previously developed sites may not require lengthy new interconnection lines or site access driveways and roads, potentially avoiding these associated costs and impacts.

Brownfield land may also present risks to developers. Previous use of the land can often leave behind unstable soil or remnants that may present permitting and construction challenges. Use of brownfield sites increases the need and specificity of geotechnical surveys and can lead to remediation efforts to make the land usable for PV. Also, procuring land rights for these sites may be difficult with multiple land rights claims.

A solar project sits on an active farm. Photo by Jordan Macknick

Previously tilled agricultural land can provide an asset to both landowners, farmers, and solar developers. From discussion with solar industry members, previously tilled agricultural lands present the least upfront risk from a land and siting perspective. There are often little soil and geotechnical issues and the slope of this land is often uniform enough to support all types of racking systems.

Farmers can gain numerous benefits from solar systems being sited on their land. Solar can be installed on the margins of the field that are not being used for farming; this allows farming activities and energy production at the same time. PV projects can also provide an additional revenue source for farmers that can increase the economics of farming land use (see Co-location section) and provide for diversification of revenue sources (beneficial in drought years). Also, farmers can offer salt contaminated or otherwise non-usable land to developers. Solar sites often have a life span of 20-25 years and can easily be removed at the end of its life that will allow for land recharge and future farming use of this land.

Drawbacks of using previously tilled agricultural land can include the reduction of available farming area for landowners. Even though the land is currently uneconomic, market conditions may change in the future that may provide a better investment for the farmer. With solar, farmer will have to sign a long-term lease of the land and accept the fact that the site will be there for 20-25 years. Previously tilled agricultural land may often have latent seed banks that may increase the O&M considerations for managing vegetation that may not be suitable for growth under solar modules.

Greenfield sites include land that have not been disturbed by human use in the past. Developers often find that land risks are reduced when using greenfield sites, but this land is often the most expensive during the land procurement and leasing process.

Some risks to developers include possible environmental delays. Greenfield lands may provide suitable habitat for sensitive and/or endangered species that can potentially derail a project or cause re-siting. Because this greenfield land could be used for other purposes, the environmental permitting and land procurement process may be highly visible and sensitive. Many people may feel that the land should be used for preservation or other less invasive uses that may slow down the development process. One example includes solar sites in the Mojave Desert that impacted Desert Tortoise habitat and migration. Environmental groups have taken legal actions for these contentious sites which has added 2-3 years of delay and caused other solar sites to change locations.

Environmental permitting costs were found to vary by region and jurisdiction and could be drastically impacted by litigation occurrences during environmental review. Permitting time was found to take roughly 1 year but could take up to 2-3 years in some cases. Permitting, inspection, and interconnection (PII) costs for commercial PV projects are between 0.2-1.4 percent of total project capital costs. This represents a small portion of the overall total cost, but PII was identified as a potential market barrier by respondents. Thorough upfront site screening and avoidance of environmentally impactful sites was identified as a best practice from discussion with industries.

Storm Water Prevention Permits (SWPP) may also present a large upfront cost and delay. SWPP permits are needed anytime a constructor may change the natural runoff and erosion coefficients. Large retention ponds may be needed to mitigate large grading events that takes away available land for solar use.

One industry interviewee described his company’s preference for siting projects on previously tilled agriculture sites: “You just come in, mow the vegetation, and commence construction.”

Retrieved from "https://openei.org/w/index.php?title=InSPIRE/siting/siting/upfront_site_screening_and_selection&oldid=999285"
Category:
OpenEI is developed and maintained by the National Renewable Energy Laboratory with funding and support from the U.S. Department of Energy and a network of International Partners & Sponsors.