CD-3: Crystalline Rock - Basement:
This play is located underneath large areas of continent in faulted or fractured crystalline rock with very low natural porosity and permeability but storing vast amounts of thermal energy.
Other definitions:Wikipedia Reegle

This classification scheme was developed by Moeck and Beardsmore, as reported in A New 'Geothermal Play Type' Catalog: Streamlining Exploration Decision Making.[1] 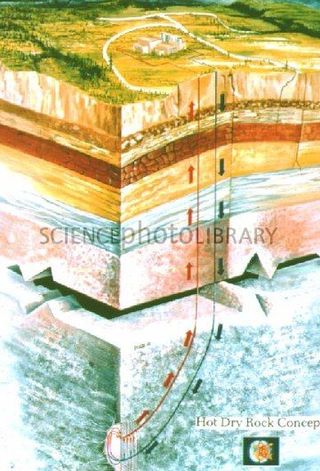 Schematic diagram of the Fenton Hill geothermal project, operated by Los Alamos National Laboratory, New Mexico, USA. The system works on the principal of a closed loop for pumping water into a well situated 2,590 meters under the Jemez Plateau, New Mexico, that is surrounded by hot granitic rock at a temperature of 185°C. The water absorbs heat and is brought back to the surface under sufficient pressure to prevent it boiling. Part of the heat from the well was used to boil Freon 114 to produce a vapour that drove a small turbine which yielded 60 KW of electrical power. Image and caption provided by the Science Photo Library.[2]

According to Moeck and Beardsmore, conductive geothermal plays in crystalline basement rocks are typically encountered where intrusive rocks occur in flat terrain.[3] Such settings may feature gentle surface topography underlain by fractured, critically stressed hot crystalline rocks capped by a thermal insulating layer.[4] Isotherms are dominantly conductive in this setting, with heat flows measuring much greater than the continental average. Plays of this type typically consist of a moderate temperature resource (150 - 250°C) at relatively deep levels between 4 and 6 km.  Stored heat in the system may originate from shallow mantle, bodies of hot rock in the upper crust, and/or from radiogenic heat produced by elements in the rock.[4]

Reservoir rocks in basement geothermal plays consist of hot intrusive rocks with low natural porosity, permeability, or volume of contained fluid. The ideal reservoir rock hosts natural fractures that are amenable to hydraulic pressure stimulation, hydro-shearing, and/or thermal stimulation. Fractured granite is a typical reservoir rock fitting these criteria, and tends to host fracture-dominated permeability that is favorable to stimulation. The variability of the orientation of these fractures is controlled by the tectonic stress field - comprehensive understanding of the stress field is critical for achieving interconnection between reopened fractures and planned injection and production wells. The matrix of the primary reservoir rock must be strong in order to support open fractures created or opened during stimulation. Following stimulation, fracture controlled circulation of water along dominant flow paths from injection to production wells becomes the primary mechanism of heat transport used to recover energy from the reservoir.[4] As a consequence, fluid access to the stored heat resource is limited by the continuity of reopened fractures and by the volume of reservoir rock that has been engineered via stimulation techniques.

Want to add an example to this list? Select a Geothermal Resource Area to edit its "Moeck-Beardsmore Play Type" property using the "Edit with Form" option.

Retrieved from "https://openei.org/w/index.php?title=CD-3:_Crystalline_Rock_-_Basement&oldid=960705"
Categories:
OpenEI is developed and maintained by the National Renewable Energy Laboratory with funding and support from the U.S. Department of Energy and a network of International Partners & Sponsors.