CD-1: Intracratonic Basin:
A geothermal play located in an intracratonic basin. The reservoir is placed within a sedimentary sequence laid down in an extensional graben or thermal sag basin.
Other definitions:Wikipedia Reegle

This classification scheme was developed by Moeck and Beardsmore, as reported in A New 'Geothermal Play Type' Catalog: Streamlining Exploration Decision Making.[1] 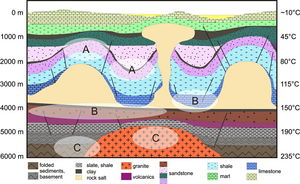 Intracratonic Basin Geothermal Plays are encountered in rift basins and passive margin basins that originate from lithospheric thinning and subsidence.[3] Extensional grabens and thermal sag basins in these intracratonic settings are commonly divided into multiple troughs or sub-basins, with favorable geothermal plays localized depending on the basin’s present-day internal structure.[4] Local positive thermal anomalies are produced in formations situated above salt diapirs due to the high thermal conductivity of salt rock, and might provide suitable geothermal reservoirs for district heating.[5] Formations encountered in deeper parts of an intracratonic basin might provide favorable reservoirs for power and heat production, provided that geothermal fluids can be produced at a flow rates of about 70 kg/s or greater.[6] Heat transport into the basin is dominantly controlled by the thermal conductivity of the reservoir rock, which relates to the lithofacies and/or biofacies subdivisions within the basin fill sequence.[3]

Reservoir rocks are typically confined to a several kilometers thick sedimentary basin fill sequence spanning a broad range of depositional environments that have existed within the basin over the course of its geologic lifetime. Depending on the basin history, potential reservoir units may include terrestrial aeolian to fluvial siliciclastics, muds, shallow marine carbonate and evaporite sequences, and/or deep marine shale and pelagic clay sequences.[1]

Fluid storage capacity and the distribution of high and low porosity domains within the reservoir are controlled by the primary porosity of lithologic units and secondary porosity created through diagenesis.[7][8] These properties are in turn strongly influenced by subsidence rates and the evolution of the basin through geologic time. Permeability within the reservoir and its anisotropy are controlled by lithology, faults and the regional tectonic stress field. Reservoir fluids contained in these high porosity/low permeability sedimentary aquifers are typically high-chloride basinal brines or HCO3-rich infiltration waters.[1]

Known conductive geothermal plays in intracratonic basins include the North German Basin in Germany[1] and the Paris Basin in France.[9]

Want to add an example to this list? Select a Geothermal Resource Area to edit its "Moeck-Beardsmore Play Type" property using the "Edit with Form" option.

Retrieved from "https://openei.org/w/index.php?title=CD-1:_Intracratonic_Basin&oldid=961742"
Categories:
OpenEI is developed and maintained by the National Renewable Energy Laboratory with funding and support from the U.S. Department of Energy and a network of International Partners & Sponsors.