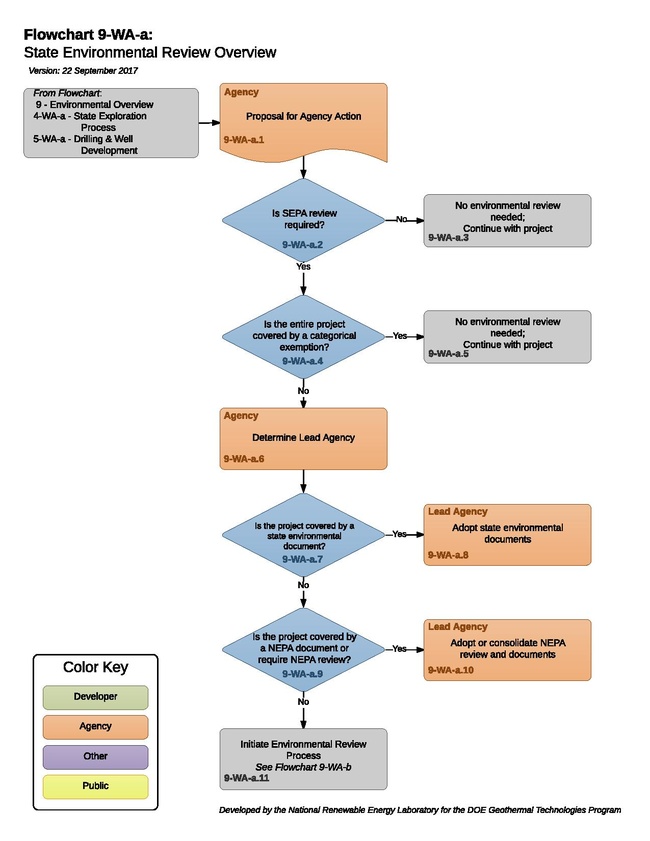 The state of Washington recommends that the developer meet with the project’s lead agency to discuss the project proposal prior to submitting a permit application or environmental checklist. For more information regarding how the lead agency is determined, see 9-WA-a.7 below. At the conference, the developer and agency may discuss existing regulations that would affect the proposal, the steps and possible timeline for project review, and other information that may help the developer submit a complete application. SEPA Online Handbook § 2.1.

The developer must submit a project proposal or permit application to the relevant agency. Proposals include public projects or proposals by agencies and proposals by developers. The developer’s proposal may be put forward as an objective, as several alternative means of accomplishing a goal, or as a particular or preferred course of action. WAC 197-11-060. Proposals or parts of proposals that are related to each other closely enough may be treated in the same environmental documents.

SEPA environmental review is required for any state or local agency decision that meets the definition of an “action” and is not categorically exempt. Actions are divided into two categories, “project actions” and “nonproject actions.”

Project Actions include agency decisions to:

Nonproject Actions involve decisions on policies, plans, or programs and include:

To determine if SEPA review is required the developer should accurately define the proposal. Defining the proposal involves identifying all related and interdependent pieces of the proposal, including all permits that the project will require. WAC 197-11-060.

SEPA contains a list of actions that are statutorily exempt from SEPA review. RCW 43.21C.010 et seq.. However, if some aspect of the proposal is exempt while other actions are not exempt, the developer will be required to comply with the full SEPA review. WAC 197-11-305.

Examples of specific actions that are exempted from SEPA review include:

The following rules apply for determining the Lead Agency:

For most geothermal proposals, the lead agency will be the Washington State Department of Natural Resources.

For most hydropower project proposals, the lead agency will be the first agency to issue a permit for the proposed project. This is often the city or county within whose jurisdiction the project is located, WAC 197-11-932, or a local agency, WAC 197-11-934.

9-WA-a.8 to 9-WA-a.10 - Is the Project Covered by an Existing State Environmental Document?

Any agency acting on the same proposal must use an environmental document unchanged, except in the following cases:

Existing documents may be used for a proposal by employing one or more of the following methods:

However, in adopting an exiting environmental document, the agency must follow the procedures outlined in WAC 197-11-630.

Some projects may require the developer to comply with both NEPA and SEPA requirements. In these situations the state of Washington allows the developer to adopt NEPA documents as a substitute for SEPA procedures.

If NEPA and SEPA review have yet to be conducted, the lead agency and federal agencies may agree to concurrent environmental review, which would satisfy all requirements.

If the project is not covered by another environmental document and SEPA review is required, then the developer must initiate the State Environmental Assessment process:

Retrieved from "https://openei.org/w/index.php?title=RAPID/Roadmap/9-WA-a&oldid=956413"
Categories:
OpenEI is developed and maintained by the National Renewable Energy Laboratory with funding and support from the U.S. Department of Energy and a network of International Partners & Sponsors.