Information current as of 2020
A developer may need to undergo the Rural Utilities Service (RUS) National Environmental Policy Act (NEPA) Review process if the developer is receiving a loan, loan guarantee, or grant from the United States Department of Agriculture (USDA) for the construction of electric distribution, transmission, and generation facilities to entities that provide retail electric service to rural areas. The loans are distributed the RUS’s Electric Program. Loans, loan guarantees, and grants are considered to be “major federal actions,” as defined by the Council on Environmental Quality (CEQ) regulations at 40 C.F.R. § 1508.18. Consequently, RUS must comply with the National Environmental Policy Act (NEPA) before funds may be distributed. RUS has developed its own set of NEPA regulations governing NEPA procedures for its programs.

The RUS authorizes most of the loans, loan guarantees, or grants for rural electric development pursuant to the Rural Electrification Act of 1936. 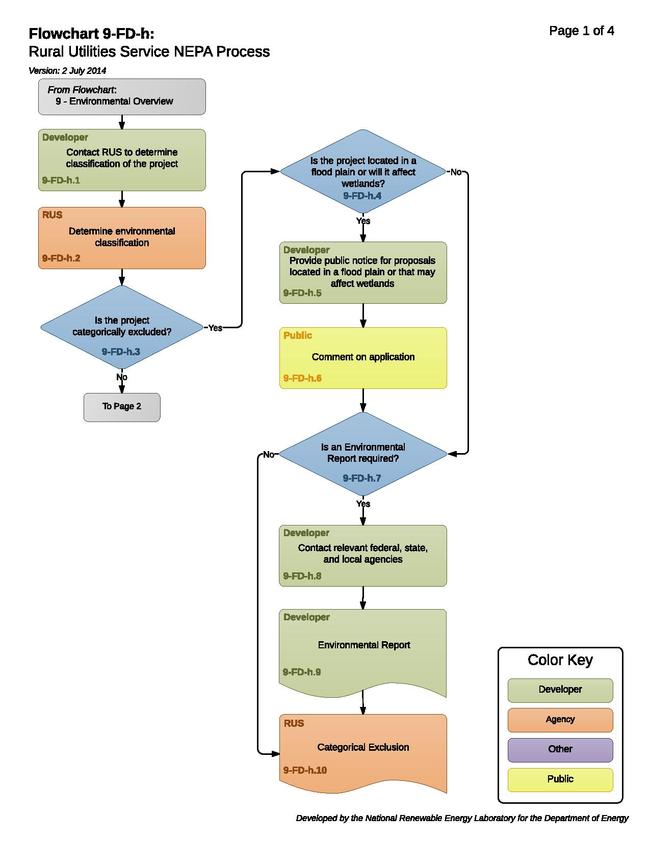 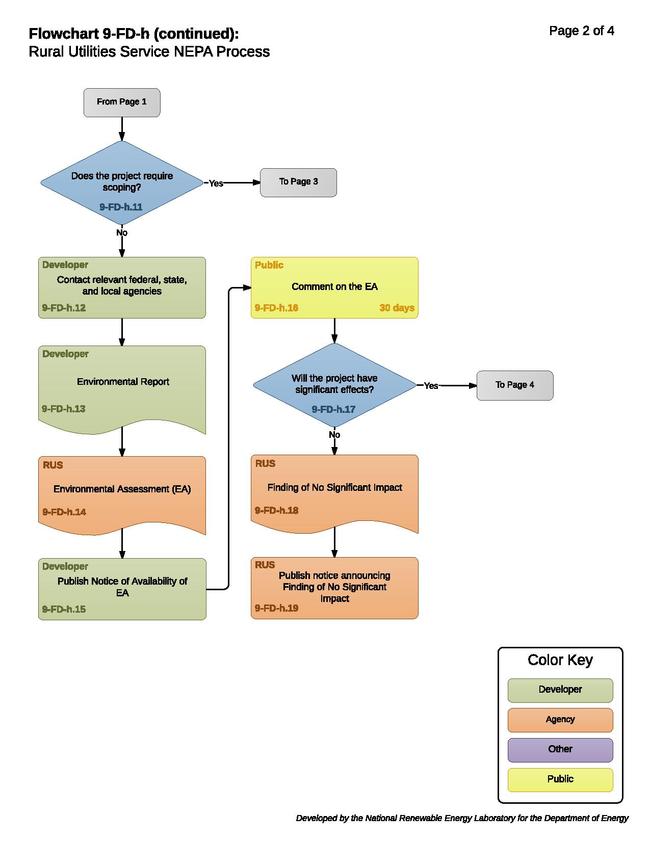 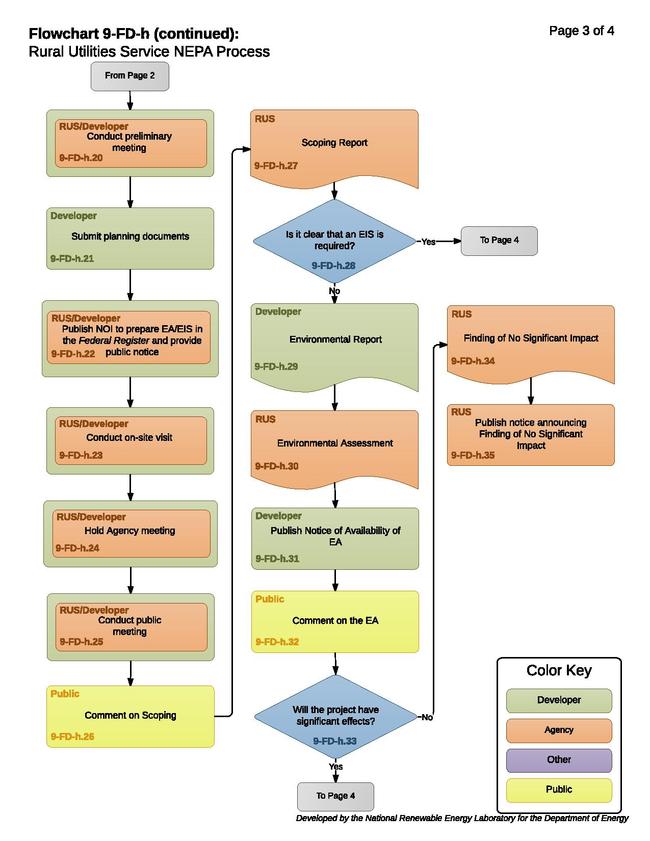 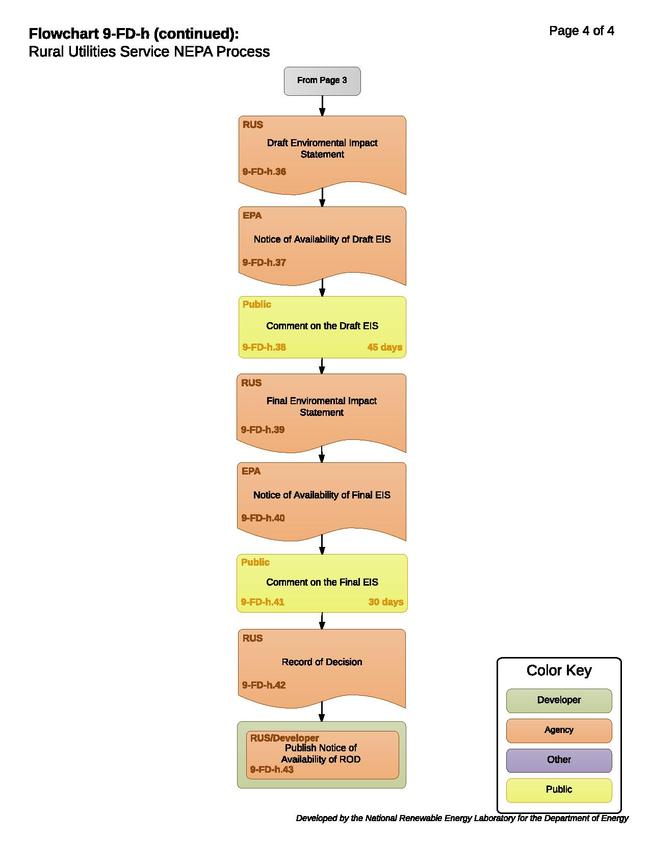 9-FD-h.1 to 9-FD-h.2 – Contact RUS to Determine Classification of the Project

The developer should contact RUS as soon as it decides to apply for funding that will finance the construction of transmission lines or a generation project. RUS then determines the proper environmental classification based on the project description that is submitted with the application for funding. See RUS Bulletin 1794A-603, page 3; 7 C.F.R. § 1794.31. There are five environmental classifications listed in RUS’ NEPA regulations:

The types of proposed actions that fall under each classification are listed in the cited regulations. The type of classification determines which set of procedures RUS and the developer must follow in order to comply with NEPA.

A categorical exclusion (CX) is a category of actions that, individually or cumulatively, do not have a significant effect on the environment. Federal agencies may establish CXs in accordance with their NEPA procedures. An EA or EIS may be necessary, even though the activity is covered by a CX, if extraordinary circumstances are present. See 40 C.F.R. § 1508.4.

Proposed projects that fall under one of the two RUS CX classifications may require public notice. Public notice is required for CXs when the proposed project is located in a floodplain or may affect wetlands. The developer must publish both a legal notice and a paid advertisement in at least one newspaper of general circulation within the project’s area of environmental impact and in the county in which the project is being developed. All comments received pursuant to the public notice should be forwarded to RUS. After the notice has been published, the developer must submit copies and publication dates to RUS. See RUS Bulletin 1794A-600, pages 34-35; 7 C.F.R. § 1794.13; 7 C.F.R. § 1794.32.

Projects that fall under the CX classification listed in 7 C.F.R. § 1794.22 require the preparation of an Environmental Report (ER). ERs are prepared by the developer and submitted to RUS. The purpose of an ER is to enable RUS to “evaluate the environmental effects of a proposed categorically excluded project.” See RUS Bulletin 1794A-600, page 1. The ER must include the following:

A detailed description of each required element, as well as environmental factors that must be addressed, can be found in RUS Bulletin 1794A-600. In addition, the developer should contact relevant federal, state and local agencies and obtain any information (preferably in written form) needed for the preparation of the ER. Agency comments should be included in the ER, along with the developer’s responses to those comments. Specific instructions for agency correspondence can be found in RUS Bulletin 1794A-600, pages 30-33.

The CEQ defines scoping as “an early and open process for determining the scope of issues to be addressed and for identifying the significant issues related to a proposed action.” CEQ regulations governing scoping can be found at 40 C.F.R. § 1501.7. It should be noted that although the CEQ regulations only discuss scoping as it relates to an EIS, they nonetheless apply to EAs for projects listed in 7 C.F.R. § 1794.24 by virtue of the RUS NEPA regulations.

The CEQ requires the following in an agency’s scoping process:

Under the RUS NEPA regulations, scoping is required for projects that require an Environmental Impact Statement (EIS) and for projects that fall under the EA classification (Proposals normally requiring an EA with scoping) described in 7 C.F.R. § 1794.24. The RUS scoping process is identical for both types of classifications. RUS scoping guidance can be found in RUS Bulletin 1794A-603.

An EA is a concise public document that helps the agency determine whether an EIS or Finding of No Significant Impact (FONSI) is required. It should include a brief assessment of the proposed action and an analysis of the evidence relating to significant environmental impacts. It should also include an analysis of the effects of the proposed action and of the alternatives. See 40 C.F.R. § 1508.9. If RUS determines that there are no significant environmental impacts after completing the EA, a FONSI should be prepared.

After RUS has prepared the EA, the applicant must publish both a legal notice and an advertisement in a newspaper of general circulation, indicating the EA’s availability for public review. The notice should solicit comments on the EA, and the comment period must last for at least 30 days. RUS Bulletin 1794A-601, page 35. After comments have been received, RUS determines whether the proposed project will have a significant effect on the quality of the human environment. If so, an EIS must be prepared. If not, RUS prepares a Finding of No Significant Impact (FONSI). A FONSI is a document prepared by a federal agency that briefly explains why an action will not have a significant effect on the human environment. See 40 C.F.R. § 1508.13.

The developer must publish a second notice once RUS has prepared and approved the FONSI. The second notice must inform the public of the RUS findings and of the availability of the FONSI and EA. RUS may disburse loan or grant funds at any time after the second notice has been published. See 7 C.F.R. § 1794.43 – 1794.44; RUS Bulletin 1794A-601, page 35.

For a more detailed description of the preliminary meeting, see RUS Bulletin 1794A-603, pages 3-5.

RUS must publish a Notice of Intent (NOI) to prepare an EA or an EIS in the Federal Register as soon as a schedule has been developed for the environmental review process. In addition, the developer must publish a notice in a newspaper of general circulation based on the NOI. Other forms of notice, such as direct mailings to the public, billboard notices in libraries, public buildings and post offices, and radio or television announcements, may be necessary to ensure that the public is aware of the scoping process. In some cases, notice must be provided to low income and minority populations directly. In addition, RUS will generally notify local governments and agencies of scoping by letter and invite them to attend the agency and scoping meetings. See RUS Bulletin 1794A-603, pages 8-9; 7 C.F.R. § 1794.51.

RUS, the developer, and cooperating agencies should visit the preferred and alternative sites under consideration prior to the public meeting in order to:

RUS and the developer will hold two scoping meetings. The first is the agency meeting, which is optional for an EA but recommended for an EIS. The agency meeting is designed to provide interested federal and state agencies and local governments with information regarding the “description, need, and potential project locations or routing, discuss compliance and permitting requirements, and cover the range of issues to be addressed in the environmental documents.” See RUS Bulletin 1794A-603, page 7. The agency meeting does not normally include public involvement. Planning documents that have already been submitted to RUS should be made available during the meeting.

During the public meeting, RUS and the developer’s representatives should encourage the public to provide written comments. Written comments may also be mailed or emailed to RUS after the meeting. The comment period is usually limited to 30 days. Issues and concerns derived from the comments will be addressed in the EA or EIS. See RUS Bulletin 1794A-603, pages 10-12.

After the public meeting, RUS, cooperating agencies, and the developer will prepare a scoping report. The scoping report is an informal document that addresses additional information derived from the scoping process and the public meeting that may need to be included in the EA or EIS. This includes environmental, engineering, or economic issues important to the public. Other items that may be addressed in the report include:

If, after scoping, RUS determines that an EA should be prepared, the process will be identical to the one outlined in 9-FD-h.12 through 9-FD-h.19.

Once scoping is complete and RUS has determined that an EIS is necessary, a draft EIS should be prepared.

The draft EIS should be prepared in accordance with the scope established by the scoping process. It should conform to the requirements for a final EIS to the greatest extent possible. The recommended CEQ format for an EIS is as follows:

After the draft EIS has been prepared, RUS circulates it to other agencies and the public. See 40 C.F.R. § 1502.19. RUS then submits the draft EIS to the Environmental Protection Agency (EPA), who publishes a Notice of Availability (NOA) in the Federal Register. The NOA begins the comment period for the draft EIS, which must last a minimum of 45 days.

Once the review period for the final EIS has been completed, RUS prepares a Record of Decision (ROD) in accordance with 40 C.F.R. § 1505.2. The ROD is a concise public record that documents the decision reached in the EIS regarding the proposed action. The ROD must state what the decision was, outline the deliberations taken to reach the final decision, indicate the reasons for that decision, identify all alternatives considered by RUS in reaching its decision, and state whether all practicable means to avoid or minimize environmental harm from the alternative selected have been adopted, and if not, why not. See 40 C.F.R. § 1505.2. Separate RUS and developer NOAs are published for the ROD, and the NOAs should summarize the RUS decision. See 7 C.F.R. § 1794.63. RUS may disburse funding at any time after the ROD has been published. See 7 C.F.R. § 1794.64.

Retrieved from "https://openei.org/w/index.php?title=RAPID/Roadmap/9-FD-h&oldid=979035"
Categories:
OpenEI is developed and maintained by the National Renewable Energy Laboratory with funding and support from the U.S. Department of Energy and a network of International Partners & Sponsors.