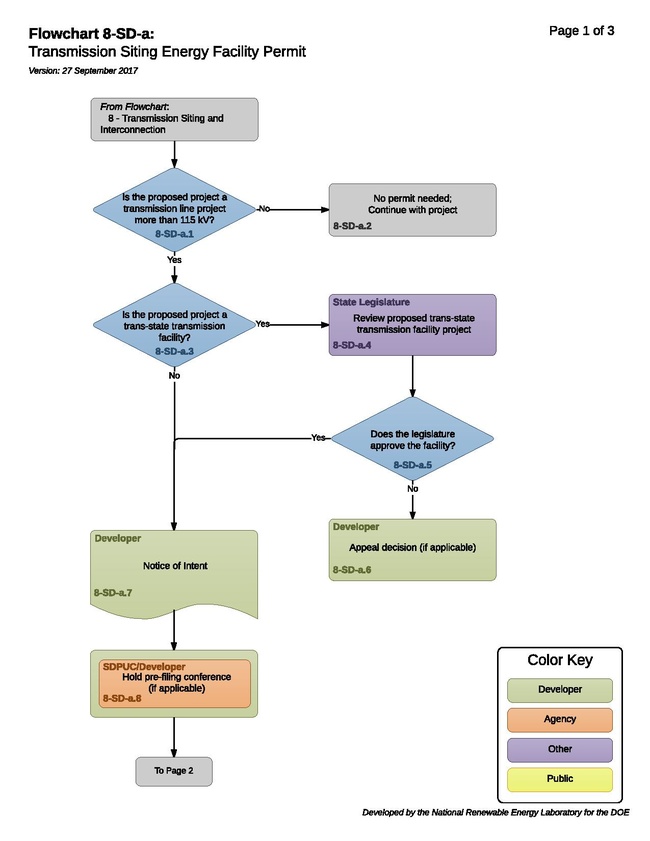 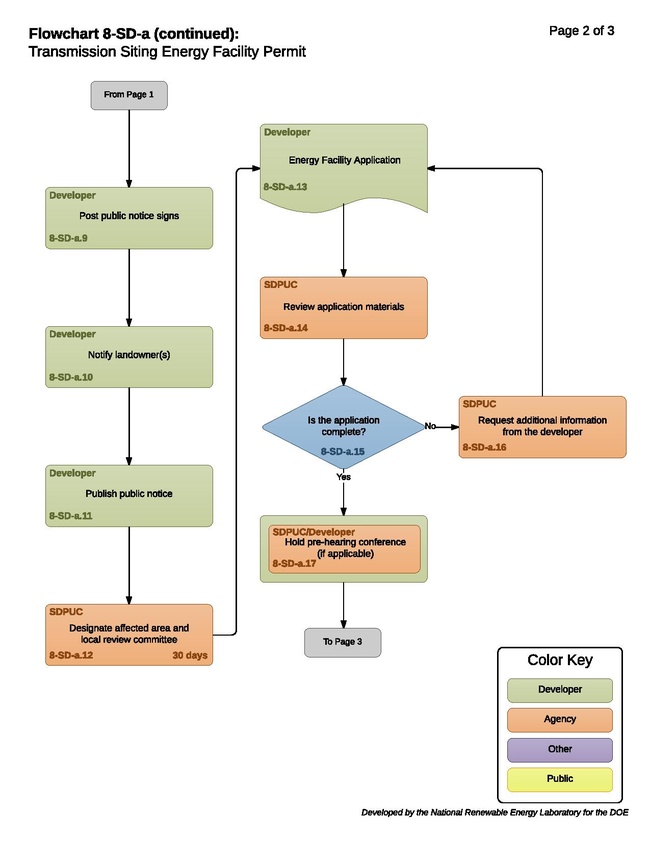 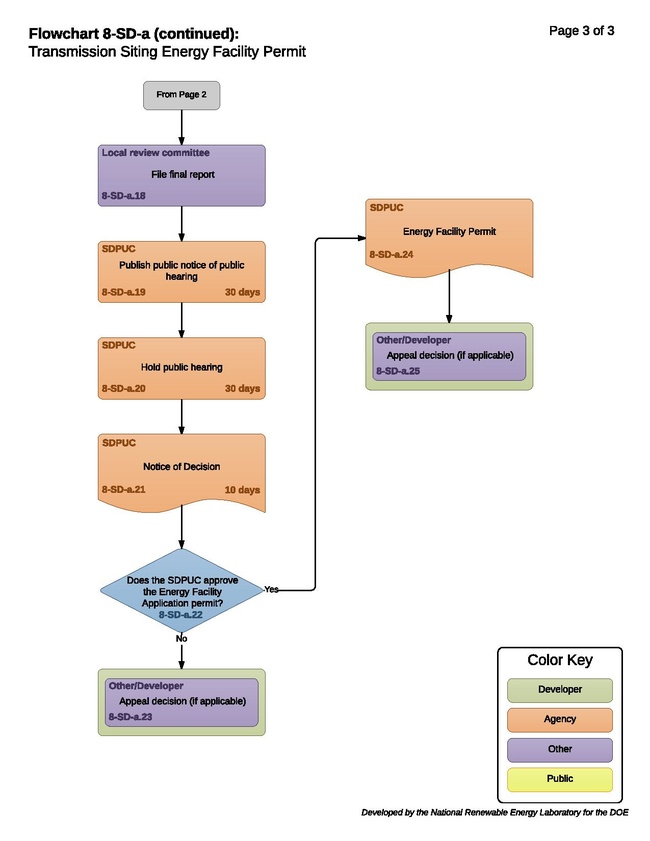 Transmission line projects of more than 115 kV must obtain a permit from the South Dakota Public Utilities Commission (SDPUC) prior to beginning construction. 49-41B S.D. § 4.

8-SD-a.3 – Is the Proposed Project a Trans-State Transmission Facility?

Before approving a proposed trans-state transmission line, the South Dakota Legislature must find that the proposed project meets each of the following criteria:

The notice of intent, at minimum, must include:

A developer must post signs on the area where the developer proposes to locate the energy conversion facility or AC/DC conversion facility in order to notify the public. The developer must post the signs in areas that are clearly visible to an ordinarily observant person within 30 days after the filing of the notice of intent to apply for a permit to construct the proposed project. 49-41B S.D. § 5.1. The signs must include the name and contact information of the developer and a brief description of the proposed facility. 49-41B S.D. § 5.1.

The developer must file an Energy Facility Application within the SDPUC at least six months prior to the planned date for the commencement of construction of a facility. The application must include, at a minimum, the following:

When filing the application, the developer must also deposit an environmental impact fee with the SDPUC. The SPDUC will determine the initial deposit amount based upon the estimated cost of investigating, reviewing, processing, and serving notice of an application. 49-41B S.D. § 12. “The maximum fee chargeable may not exceed one-quarter of one percent of the first one hundred million dollars of estimated construction cost plus one-twentieth of one percent of all additional estimated construction costs of the facility. However, the minimum total fee chargeable may not be less than eight thousand dollars.” 49-41B S.D. § 12.

If the SDPUC determines that an environmental impact statement should be prepared before taking final action on an application, the maximum fee chargeable may be increased to an amount not to exceed one-half of one percent of the first one hundred million dollars of estimated construction cost plus one-twentieth of one percent of all additional estimated construction costs of the facility. However, these provisions do not apply in cases in which a detailed environment impact study has been completed pursuant to the requirements of the National Environmental Policy Act and its implementing regulations if such a statement is available to the commission at least 30 days prior to the time the commission is required to render a decision under § 49-41B-24 or § 49-41B-25. 49-41B S.D. § 12.

The SDPUC reviews the application materials for administrative and technical completeness. The SDPUC may deny, return, or request an amendment to an application for:

The SDPUC may also request further information from the developer. 49-41B S.D. § 14.

Within seven months after the application is filed, the local review committee must file a final report with the SDPUC. The report must include the recommendations of the committee as to mitigation measures and minority reports. 49-41B S.D. § 10.

The SDPUC must also notify the local authorities about the public hearing and file a copy of the application with the auditor of the county where the construction of the energy facility will take place. 49-41B S.D. § 15.

The developer has the burden of proof to establish:

Prior to issuing a permit, the SDPUC may prepare or require the preparation of an environment impact statement. 49-41B S.D. § 21. For more information, see:

Any party to a permit issuance proceeding aggrieved by the SDPUC’s final decision on an application may obtain judicial review of that decision by filing notice of appeal in circuit court. 49-41B S.D. § 30.

Retrieved from "https://openei.org/w/index.php?title=RAPID/Roadmap/8-SD-a&oldid=975370"
Categories:
OpenEI is developed and maintained by the National Renewable Energy Laboratory with funding and support from the U.S. Department of Energy and a network of International Partners & Sponsors.