The Utah Public Service Commission (PSC) regulates public utilities in the state. “Public utilities” include "electrical corporations" which are defined in Utah Code 54-2-1(7) to include every corporation, cooperative association, and person, their lessees, trustees, and receivers, owning, controlling, operating, or managing any electric plant, or in any way furnishing electric power for public service or to its consumers or members for domestic, commercial, or industrial use, within this state, except independent energy producers, and except where electricity is generated on or distributed by the producer solely for the producer's own use, or the use of the producer's tenants, or for the use of members of an association of unit owners formed under Title 57, Chapter 8, Condominium Ownership Act, and not for sale to the public generally, and except where the electricity generated is consumed by an owner, lessor, or interest holder, or by an affiliate of an owner, lessor, or interest holder, who has provided at least $25,000,000 in value, including credit support, relating to the electric plant furnishing the electricity and whose consumption does not exceed its long-term entitlement in the plant under a long-term arrangement other than a power purchase agreement, except a power purchase agreement with an electrical corporation.

Utah defines an "independent energy producer" as every electrical corporation, person, corporation, or government entity, their lessees, trustees, or receivers, that own, operate, control, or manage an independent power production or cogeneration facility. Utah Code 54-2-1(15).

Developers of both generating facilities and transmission lines must complete the CPCN process if a proposed project meets the definition of “electrical corporations” under UC 54-2-1(7)(a) and are not exempt as an independent energy producer. Even where a developer qualifies as an independent energy producer, the PSC has held the associated transmission line to interconnect the power to the grid still requires a CPCN. 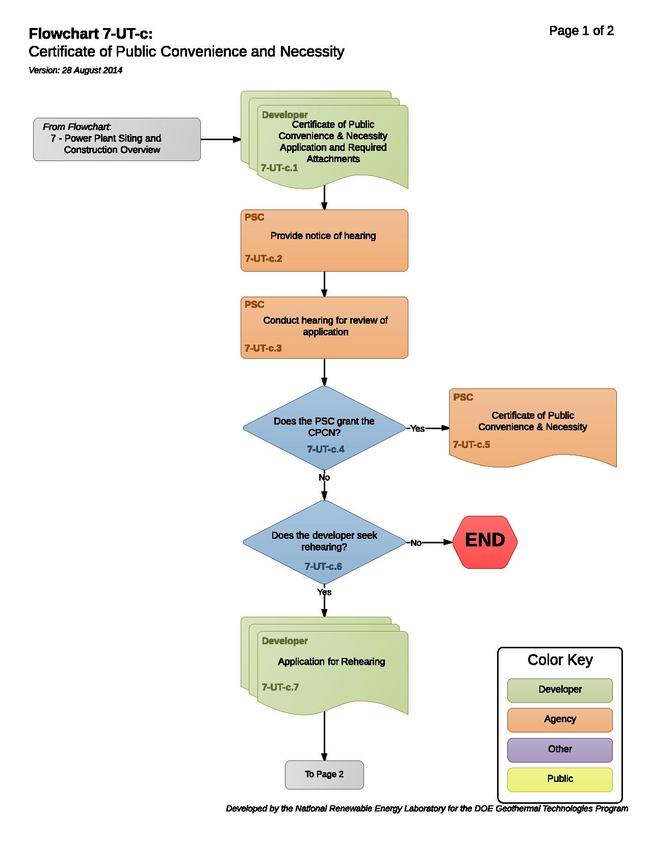 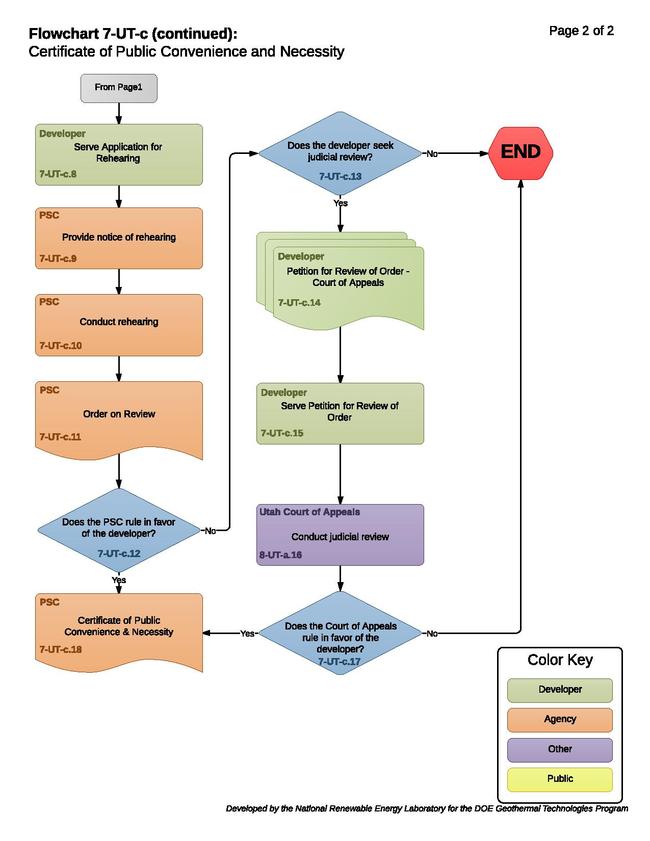 The developer must submit an Application for Certificate of Public Convenience and Necessity. In addition to submitting the application form, the developer must submit evidence that it has received, or is in the process of obtaining the required consent, franchise, or permit of the proper county, city, municipal, or other public authority. The developer must also submit a statement that the proposed project will not conflict with or adversely affect the operations of any existing public utility which supplies the same product or service. UC 54-4-25(4).

The PSC conducts a hearing to review the CPCN application. UC 54-4-25(4)(c). The PSC must file and serve notice of the hearing. The notice includes:

After the hearing, the PSC may:

The PSC conducts a rehearing. At the rehearing, the presiding officer will allow all parties to present evidence, argue, respond, conduct cross-examination, and submit rebuttal evidence. UC 63G-4-206(1)(d). After the rehearing the PSC will issue an Order on Review which will contain:

If the PSC rules in favor of the developer it will issue the CPCN. A decision on rehearing constitutes exhaustion of administrative remedies for the purpose of judicial review.

The Utah Court of Appeals has jurisdiction to review all final actions of the PSC. UC 63G-4-403(1). If the PSC rules against the developer, the developer may file a Petition for Review of Order with the Court of Appeals within 30 days after the date of the written order by the PSC. U.R.A.P. Rule 14(a). The developer must serve, personally or by mail, a copy of the petition on all named respondents, all parties to the action and the Utah Attorney General. U.R.A.P. Rule 14(c).

Retrieved from "https://openei.org/w/index.php?title=RAPID/Roadmap/7-UT-c&oldid=950928"
Categories:
OpenEI is developed and maintained by the National Renewable Energy Laboratory with funding and support from the U.S. Department of Energy and a network of International Partners & Sponsors.