The Utah School and Institutional Trust Lands Administration (UTLA) administers the sale, exchange, and lease of state school and institutional trust lands in Utah. UTLA was created to manage 12 real estate trusts granted to the state of Utah at its statehood. At that time, 1/9 of the total land in the state was designated for school trust land. Cash and proceeds from leases and sales of this land has been deposited into the permanent funds of the beneficiaries. Trust lands include both surface lands and mineral lands. However, the UTLA will only issue geothermal steam leases on parcels of land in which they hold both the surface and subsurface interests fee simple. It is worth noting, however, that the developer will still be required to obtain a permit to appropriate the geothermal fluids from the Utah Division of Water Rights before having the legal right to develop the geothermal resource on the leased lands. 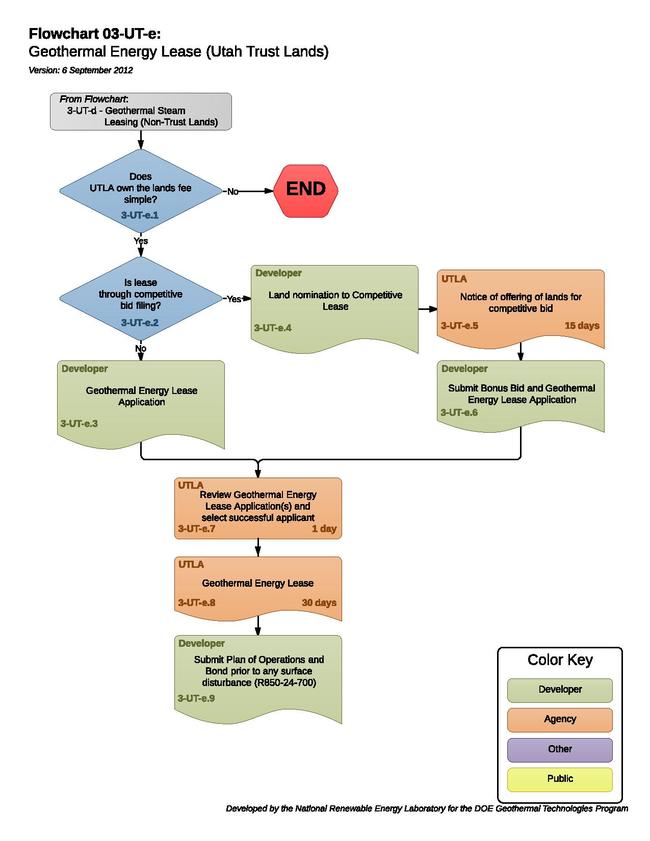 The UTLA will issue leases competitively or non-competitively for geothermal steam resources only on lands where the agency owns both the surface and mineral rights (R850-27-200).

UTLA may issue competitive or non-competitive leases in accordance with R850-27-200.

When applications for leases are received for filing in the UTLA office, they are immediately stamped with the exact date and time of filing. The time indicated on the time stamp is deemed the time of filing unless the agency determines that the application is materially deficient in any particular or particulars. If an application is determined to be deficient, it will be returned to the applicant. If two or more applications for the same lease contain identical bids and bear a time stamp showing the applications were filed at the same time, the agency will award the lease by public drawing or oral bidding (R850-27-500).

UTLA will offer notice for an offering of lands for competitive bid filing for no less than 15 consecutive days after the notice is posted in the agency office.

A competitive bid application should be submitted to UTLA in a separately sealed envelope and marked for competitive bid filing. The minimum acceptable bid should be at least equal to the statutory rental rate for the first year of the lease (R850-27-500.3)

If any application is later rejected, any money tendered for rental will be refunded or credited to the applicant.

Prior to the issuance of a lease for geothermal resources, the applicant may be required to obtain insurance of a type and in an amount acceptable to the UTLA.

Proof of insurance is in the form of a certificate of insurance containing sufficient information to satisfy the agency that insurance provisions of the permit have been complied with (R850-24-200). The following requirements apply to the insurance provided by the applicant:

The geothermal steam lease issued by UTLA will include the minimum requirements from R850-27-300; Geothermal Steam Lease Provisions.

At least 60 days prior to the commencement of any surface disturbance, drilling, or other operations, the lessee shall submit a plan of operations to the UTLA in accordance with the terms and conditions required by the agency, as set forth in R850-24-700. Under no circumstance shall the lessee commence operations without a plan of operation approved by the agency. In addition, a bond may be required under R850-24-600.

Retrieved from "https://openei.org/w/index.php?title=RAPID/Roadmap/3-UT-e&oldid=941419"
Categories:
OpenEI is developed and maintained by the National Renewable Energy Laboratory with funding and support from the U.S. Department of Energy and a network of International Partners & Sponsors.