Indian land can be owned by either tribes or individuals. There are two types of individually-owned Indians lands:

Tribal land may also be trust land or restricted fee land. In addition, tribes may purchase fee land that is outside of the reservation and is generally not subject to any restrictions against encumbrance or alienation.

See the Tribal Energy and Environmental Information Clearinghouse and the Bureau of Indian Affairs for more information.

There are three circumstances in which Indian tribes may negotiate and enter into a lease without BIA approval. The first is when a tribe incorporates under 25 U.S.C. 477, also known as section 17 of the Indian Reorganization Act of 1934. Section 17 allows the Secretary of the Interior to issue charters of incorporation to tribes. Incorporated tribes may lease trust or restricted Indian land for up to 25 years without BIA approval.

Second, 25 U.S.C. 3504 permits tribes to enter into a Tribal Energy Resource Agreement (TERA) that has been approved by the Secretary of the Interior. The TERA allows tribes to enter into and manage leases, business agreements, and rights-of-way for the purpose of energy resource development on tribal land. Tribes who have entered into an approved TERA may lease tribal land without obtaining approval from the BIA.

Third, the Helping Expedite and Advance Responsible Tribal Homeownership (HEARTH) Act amended 25 U.S.C. 415 to allow tribes to develop their own regulations for administering leases on tribal land, so long as the regulations are approved by the Secretary of the Interior. In addition, some tribes (most notably the Navajo Nation and the Tulalip Tribe) have received an exemption from 25 U.S.C. 415 because their leasing regulations were approved by the Secretary of the Interior before the HEARTH act was passed. See 25 U.S.C. 415(b) and (e). Leases issued by the exempt tribes or leases issued pursuant to the HEARTH act do not require BIA approval.

Regardless of which federal regulations are applicable, developers must always negotiate the lease directly with the tribe. The terms of the lease and governing tribal law will vary from project to project. This section is designed to direct the developer to the applicable federal statutes and regulations. Sections 3-FD-g and 3-FD-h provide an overview of federal requirements for obtaining leases on federal land. Individual tribes should be contacted for information relating to tribal laws, regulations or leasing processes. 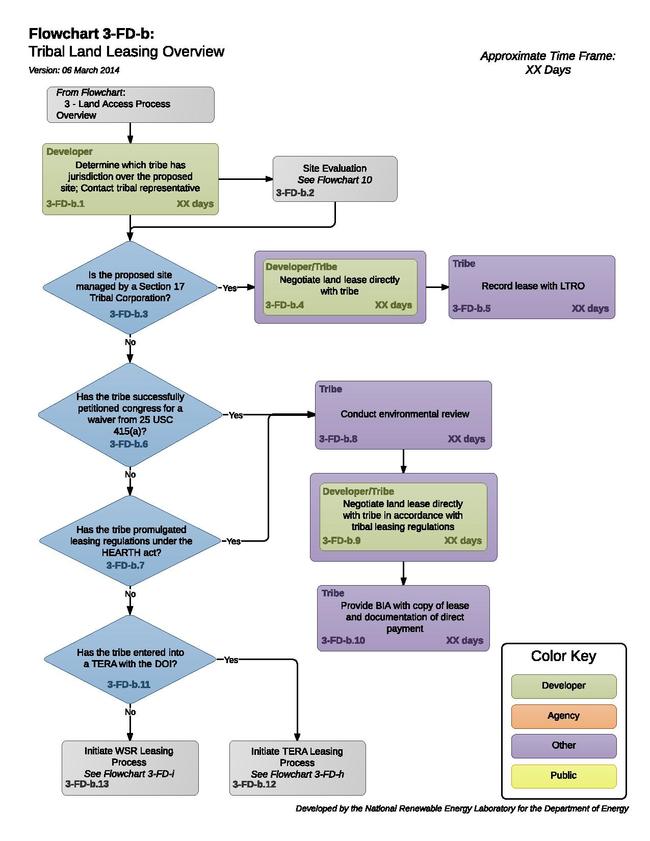 The first step in the tribal leasing process is to determine which tribe has jurisdiction over the proposed site. The developer should contact the BIA to ascertain who owns the land, whether that land is held in trust, and if so, for whom.

Each tribe has its own set of tribal laws and regulations. Leases may be issued pursuant to a TERA, the HEARTH act, the Navajo Leasing Act of 2010, 25 U.S.C. 477, or 25 U.S.C. 415. Each leasing mechanism triggers different federal leasing requirements. Therefore, it is important to contact the tribe early to determine what laws, regulations and processes apply. For tribal contact information, see the BIA Tribal Directory or contact the BIA directly.

After the developer has contacted the BIA and the appropriate tribe, a site evaluation should be conducted. Some federal requirements will still apply on tribal land and must be complied with. For example, the Clean Water Act (CWA) may require a National Pollutant Discharge Elimination System (NPDES) permit. See On-Site Evaluation Process: 10.

3-FD-b.3 to 3-FD-b.5 – Is the Proposed Site Managed by a Section 17 Tribal Corporation?; Negotiate Land Lease Directly with Tribe; Record Lease with LTRO

25 U.S.C. 477, also known as section 17 of the Indian Reorganization Act of 1934, allows tribes to petition the Secretary of the Interior for a charter of incorporation. The charter may include the power to lease trust or restricted land for up to 25 years without BIA approval. See 25 CFR 162.006. When a tribe has incorporated under section 17, the tribal government remains in place. Consequently, section 17 may not govern leasing if the charter does not contain the power to lease land or if the tribal government manages the land instead of the corporation.

Most tribal land is leased under 25 U.S.C. 415(a). The maximum term for such leases is 25 years. The leases must adhere to the federal regulations found in 25 CFR 162 et seq. and must be approved by the BIA.

Some tribes have petitioned Congress for a complete or partial exemption to 25 U.S.C. 415(a). A list of tribes that have been exempted from the 25 year limit can be found in 25 U.S.C. 415(a). In most cases, the exempted tribe may lease their land for a period of 99 years.

In addition, an amendment to 25 U.S.C. 415 granted the Navajo Nation and Tulalip Tribes the authority to issue leases without approval from the BIA after the Secretary of the Interior approved their tribal leasing regulations. See 25 U.S.C. 415(b) and (e). 25 U.S.C. 415(e), which applies only to the Navajo Nation, provided a template for the HEARTH act. It requires the tribe to develop an environmental review process and to provide the BIA with a copy of the final lease.

3-FD-b.7 – Has the Tribe Promulgated Leasing Regulations Under the HEARTH Act?

The HEARTH Act of 2012 amended 25 U.S.C. 415 to allow Indian tribes to negotiate and enter into leases without BIA approval. 25 U.S.C. 415(h) requires the tribes to develop tribal leasing regulations that must be approved by the Secretary of the Interior before they can manage their own long term leasing decisions. The lease term must be 25 years or less. The HEARTH Act does not apply to leases of individually owned Indian allotted land.

The HEARTH Act requires the Secretary of the Interior to approve the tribal leasing regulations if they are consistent with the BIA’s leasing regulations at 25 CFR 162 et seq. and if they include an environmental review process that meets the requirements of the Hearth Act. The BIA uses National Policy Memorandum NPM-TRUS-29: Guidance for the Approval of Tribal Leasing Regulations under the HEARTH Act for guidance when determining whether or not a tribe’s regulations are consistent with federal regulations. It states that “[i]n general, tribal regulations should define key terms, establish the process for review/approval of tribal land lease documents, identify required lease elements, and address rental requirements.” The tribal regulations should generally address the same issues as the BIA regulations, although the tribe may generally decide how those issues are addressed. The guidance document also contains a list of issues that must be addressed before the regulations can be approved.

In addition, the tribe must provide the lease and associated documents to the LTOR for recordation. The tribe must also provide the BIA with documentation of lease payments made directly to the tribe. See 25 U.S.C. 415(h)(6)(a) and (b).

Although not required, the BIA recommends that tribes consider:

Developers should refer to tribal leasing regulations to determine the exact process for a particular tribe. The environmental review process must be completed before the tribe approves the lease and submits the lease documents to the BIA.

After the negotiation and environmental review processes have been completed and the lease has been approved, 25 U.S.C. 415(h)(6)(A)and (B) require the tribe to provide the Secretary with a copy of the lease and documentation of lease payments that are made directly to the tribe.

25 U.S.C. 3504 allows tribes to submit a TERA to the Secretary of the Interior for approval. A TERA allows a tribe to enter into and manage leases, business agreements and rights-of-way for the purpose of energy resource development on tribal land, including development of utility-scale solar facilities. Once the Secretary has approved the TERA, BIA approval is no longer required for energy resource leases.

25 U.S.C. 3504(e)(2) contains the minimum requirements necessary for approval, including:

NEPA and the National Historic Preservation Act (NHPA) will not apply to leases entered into by a tribe pursuant to a TERA because there is no federal undertaking or major federal action. However, other federal statutes, such as the Clean Air Act (CAA) or the Clean Water Act (CWA) may still apply.

Regulations governing the TERA development and approval process can be found at 25 CFR 224 et seq. The regulations also contain a list of required provisions. See 25 CFR 224.63. 3-FD-g addresses federal TERA requirements that trigger a required action from the tribe or developer during the solar development process. See TERA Land Leasing Process:
3-(FD)-h. For a flowchart that delineates the process the BIA uses to approve the TERA, see the Tribal Energy and Environmental Information Clearinghouse website.

If the tribe with jurisdiction over the proposed site has not incorporated under 25 U.S.C. 477, has not entered into a TERA, and has not promulgated its own regulations under the HEARTH Act, the developer must obtain a Wind and Solar Resource (WSR) lease in accordance with see 25 U.S.C. 415(a) and the regulations at 25 CFR 162. See WSR Land Leasing Process:
3-(FD)-i.

Retrieved from "https://openei.org/w/index.php?title=RAPID/Roadmap/3-FD-b_(1)&oldid=941274"
Categories:
OpenEI is developed and maintained by the National Renewable Energy Laboratory with funding and support from the U.S. Department of Energy and a network of International Partners & Sponsors.