In order for the state of Alaska to sell, lease, or otherwise "dispose" of state land, the director of the Alaska Department of Natural Resources’s Division of Mining, Land and Water (DMLW) must first determine in a written finding that the disposal is in the state’s best interests. In the written Best Interest Finding, the DMLW considers and discusses certain topics required by law, such as the reasonable foreseeable effects of the disposal on the area’s fish and wildlife, historic and cultural resources, and Alaska communities. 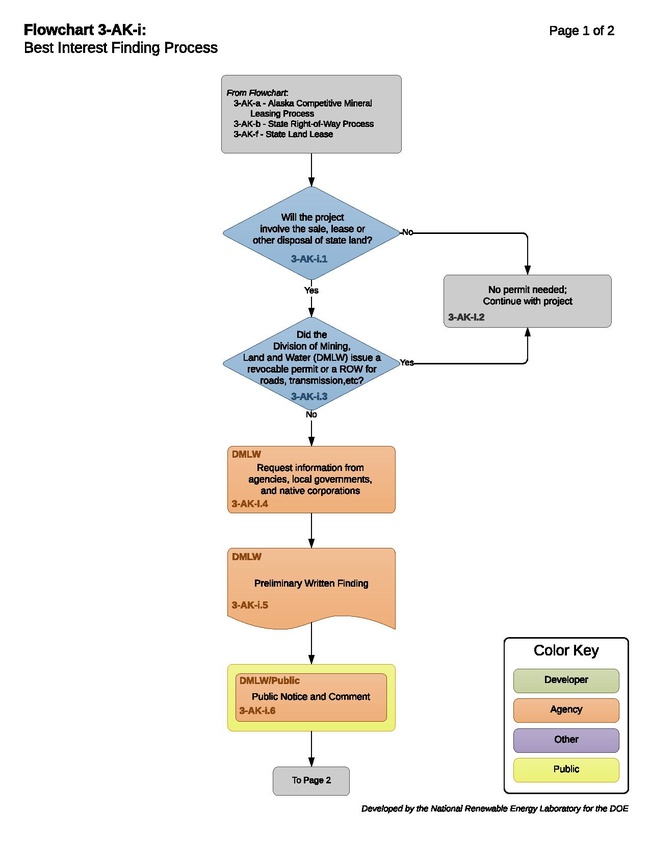 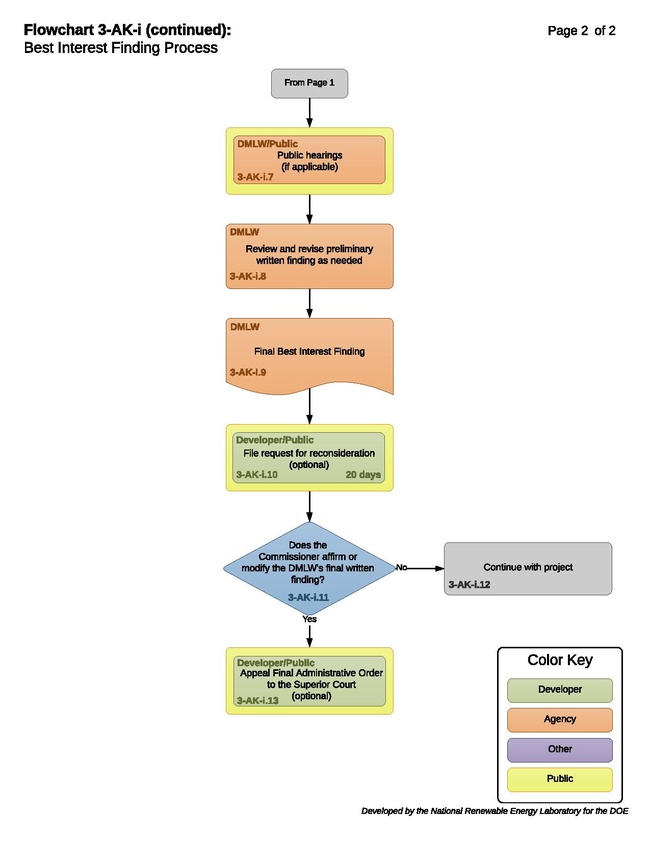 AS 38.05.035(e)’s requirement for a Best Interest Finding applies only to the sale, lease or other disposal of state-owned lands, resources, and property, or interests in them.

3-AK-i.3 - Did the Division of Mining, Land and Water Issue a Revocable Permit or a ROW for Roads, Transmission, Etc?

A written Best Interest Finding is not required before the approval of:

The process of developing a best interest finding begins with a request for information from agencies, local governments, and Native corporations. The DMLW requests information and data about the region’s property ownership status, peoples, economy, current uses, subsistence, historic and cultural resources, fish and wildlife, and other natural resource values.

The DMLW uses the information obtained from the agencies, local governments and Native Corporations, as well as other relevant information that becomes available, to develop a preliminary written finding. The preliminary written finding describes the state-lands at issue, considers and discusses the potential effects of the disposal, describes measures to mitigate those effects, and constitutes the DMLW’s determination that the interests of the state will be best served by the disposal. AS 35.05.035(e)(5)(A).

Once complete, the DMLW makes the preliminary written finding available to the public and provides an opportunity for public comment. AS 35.05.035(e)(6).

The DMLW must give notice of the disposal of state lands at least 30 days before the action by publication in newspapers of statewide circulation and in newspapers of general circulation in the vicinity of the proposed action and by one or more of the following methods:

The DMLW must also provide notice of the disposal of state lands at least 30 days before the action to the following:

The DMLW must also provide notice of the disposal of state lands at least 30 days before the action to the following:

In addition, AS 38.05.946 provides that a municipality, an Alaska Native Claims Settlement Act (ANCSA) corporation, or nonprofit community organization may hold a hearing, which the commissioner of the Alaska Department of Natural Resources (commissioner) or his representative shall attend. The commissioner may also hold a public hearing, at his or her discretion.

Once the public comment period is complete, the DMLW reviews the relevant facts and—considering issues known at the time, any comments received, and any mitigating factors—revises the preliminary written finding as needed.

The director of the DMLW (director) may impose additional conditions or limitations in a contract for the disposal of state lands as the director deems necessary, with the consent of the commissioner of the Alaska Department of Natural Resources, to best serve the interests of the state. AS 38.05.945(d).

The DMLW determines whether or not, on balance, the lease, sale, or disposal of state land is or is not in the state’s best interest and issues a final written finding. The final written finding describes the state-lands at issue, discusses material issues that were raised during the public comment period, considers and discusses the potential effects of the disposal, describes measures to mitigate those effects, and constitutes the Director’s determination that the interests of the state will be best served by the disposal. AS 35.05.035(e)(5)(A).

Any person who “meaningfully participated” in the administrative review process can file a request for reconsideration by the commissioner within 20 days after the DMLW issues the final written finding. 11 AAC 02.900. The term "meaningfully participated" means that the person: (1) submitted written comment during a public comment period; or (2) presented oral testimony at a public hearing. AS 38.05.035(i).

The commissioner may affirm the DMLW’s decision, issue a new or modified decision, or remand the matter to the DMLW for further proceedings. 11 AAC 02.020(d).

Retrieved from "https://openei.org/w/index.php?title=RAPID/Roadmap/3-AK-i&oldid=941793"
Categories:
OpenEI is developed and maintained by the National Renewable Energy Laboratory with funding and support from the U.S. Department of Energy and a network of International Partners & Sponsors.