A bulk transmission developer should consider the proposed project’s impact on geological and paleontological resources, as well as on soils.

Bulk transmission development could increase the possibility of geological hazards (earthquakes, landslides) by: 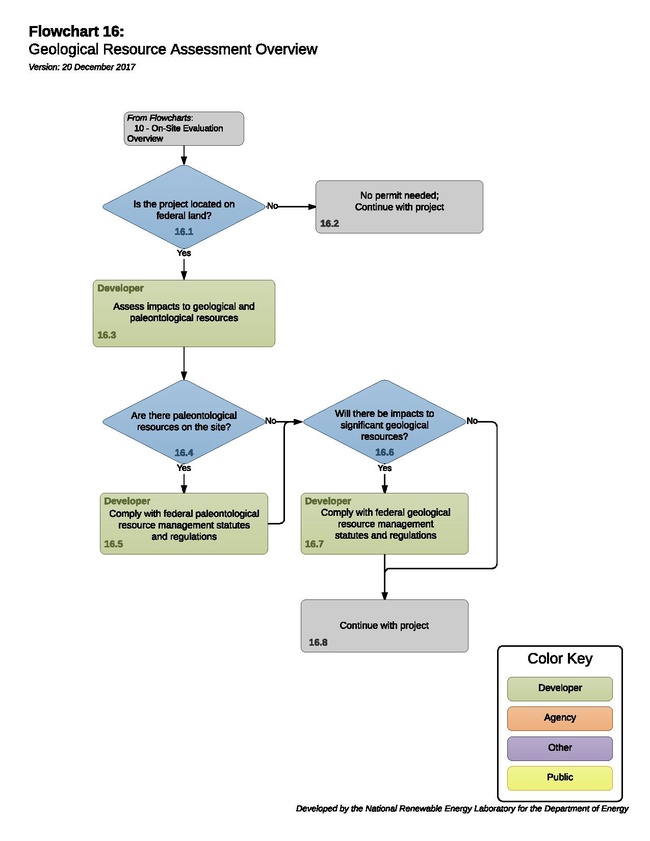 The developer must assess the potential impacts the project may have to geological and paleontological resources.

If there are paleontological resources on site, then a permit or other approval may be required.

The Paleontological Resources Preservation Act (PRPA) states that paleontological resources may not be collected from federal land without a permit issued by the Secretary of the Department of the Interior. However, the PRPA contains an exception that allows casual collecting of reasonable amounts of common invertebrate and plant fossils from federal land controlled by the Bureau of Land Management (BLM) for non-commercial use without a permit. ‘Casual Collecting’ under PRPA includes surface collection or the use of non-powered hand tools resulting in only negligible disturbance to the Earth’s surface and other resources. The PRPA maintains a prohibition on the sale of common invertebrate and plant fossils. A Paleontological Resources Use Permit is required if the activities cause a disturbance to the surface that could cause impacts on other natural or cultural resources.

43 CFR 8365.1-5 states that it is permissible to collect from public lands reasonable amounts of "nonrenewable resources such as rock and mineral specimens, common invertebrate and common plant fossils, and semiprecious gemstones" for noncommercial purposes.

According to 43 CFR 3622, persons may collect limited quantities of petrified wood for noncommercial purposes under terms and conditions consistent with the preservation of significant deposits as a public recreational resource. No application or permit is required unless the specimen weighs over 250 pounds.

As a type of government property, fossils are protected under 18 USC 641. For more information, see:

According to BLM policy handbook 8270-1 (chapter IV), the applicant (developer) must have received formal education and professional instruction in a field of paleontology equivalent to a graduate degree; and

Paleontological Resource Use Permits Guidance and

16.6 to 16.7 – Will There Be Impacts to Significant Geological Resources?

If the project will result in impacts to significant geological resources, then additional permits or approvals may be required.

The Federal Cave Resources Protection Act works to protect, secure, and preserve significant caves on federal lands. A "cave" is defined by the act as "any naturally occurring void, cavity, recess, or system of interconnected passages which occurs beneath the surface of the earth or within a cliff or ledge...and which is large enough to permit an individual to enter, whether or not the entrance is naturally formed or manmade."

The Secretary of Agriculture or the Secretary of the Interior is authorized to issue permits for the collection and removal of cave resources under terms and conditions developed by the secretary.

43 CFR 1610.7-2 sets out the rules for designating areas of critical environmental concern (ACEC). Areas with potential for ACEC designation and protection management must be identified and considered throughout the resource management planning process.

If there will be no impacts to significant geological resources or if the developer has satisfied the requirements of the applicable regulations, the developer may continue with project.

Retrieved from "https://openei.org/w/index.php?title=RAPID/Roadmap/16_(2)&oldid=962267"
Categories:
OpenEI is developed and maintained by the National Renewable Energy Laboratory with funding and support from the U.S. Department of Energy and a network of International Partners & Sponsors.