The federal Clean Air Act is administered by the United States Environmental Protection Agency at the federal level. However, many states, including Nevada, have been granted authority to administer the various parts of the CAA within the state boundaries through State Implementation Plans (SIPs). The Nevada Division of Environmental Protection (NDEP) and, more specifically, its Bureau of Air Pollution Control (BAPC) is the entity tasked with permitting the CAA within the state. 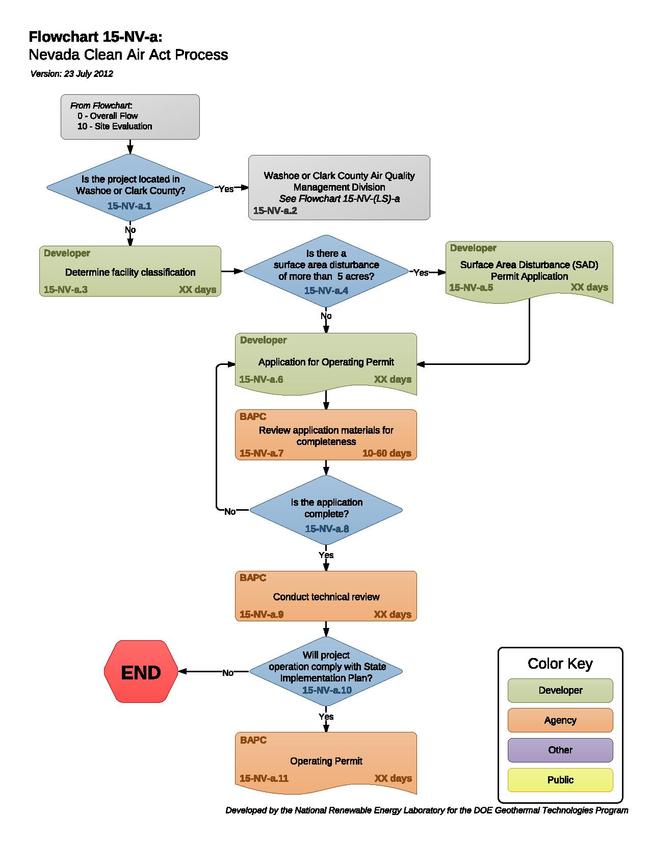 The Nevada Bureau of Air Pollution Control has jurisdiction over all air quality programs in all counties in the state except for Washoe and Clark Counties. These counties have their own Air Quality jurisdictions over which BAPC retains jurisdiction over only fossil fuel-fired units that generate steam for electricity generation.

The BAPC issues air quality operating permits to stationary and temporary mobile sources that emit regulated pollutants. This is achieved by stipulating specific permit conditions for each source. Any emission source requires an air quality permit except if your activities, pieces of equipment or storage containers will not cause emissions other than steam or water particles. BAPC provides an overview of the various classes of sources which require permits at this webpage.

A class 1 source is any stationary source subject to the federal Clean Air Act (42 U.S.C. §§ 7661 to 7661f) which is a major stationary source which the owner or operator has proposed the construction of a major modification. NAC 445B.036. In general, these facilities emit

A class 3 source is a stationary source which qualifies as a class 2 source and also meets one of the requirements set forth in NAC 445B.038. Typically facilities which emit 5 tons per year or less in total of regulated air pollutants.

If you are disturbing 5 acres or more of surface area not related to agriculture you are required to have a Surface Area Disturbance (SAD) permit. SAD permit applications can be downloaded at the BAPC forms webpage.

Based on the applicable class of the facility involved, there will be different form requirements to be completed and submitted to BAPC. Full descriptions of each facility class requirements can be found in the NDOM Regulations at NAC 445B.287 to NAC 445B.3497. Copies of specific forms are provided by the BAPC at their forms webpage.

Depending on the type of application and class of facility, the timeframe that BAPC is required to determine the completeness of the application will vary. See the Permit Guidance webpage which lists review time for different types of permits.

Depending on the type of application and class of facility, the timeframe that BAPC is required to conduct technical review of the application will vary. See the Permit Guidance webpage which lists review time for different types of permits.

Each state is responsible for developing plans to demonstrate how the EPA's National Ambient Air Quality Standards (NAAQS) will be achieved, maintained and enforced. These plans make up the state implementation plan (SIP). The plans and the rules associated with them are enforced by the state, and, after federal approval, they are also federally enforceable. States must involve the public, through hearings and opportunities to comment, in the development of SIPs.

A SIP is the framework for each state's program to protect the air. It is not a single plan, but rather the cumulative record of all air pollution control strategies, state statutes, state rules and local ordinances showing what the state has done, is doing, or plans to do to assure compliance with federal NAAQS for "criteria" pollutants. Criteria pollutants are certain pollutants—carbon monoxide, sulfur dioxide, ozone, nitrogen oxides, lead and particulate matter—that are known to be harmful to public health and the environment. Nevada enforces state ambient air quality standards and has also adopted most of the NAAQS into the state air quality regulations.

Nevada’s original SIP was submitted in 1972 and, being a living document, has undergone multiple revisions over the years. Because there have been so many changes to federal, state and local air quality programs in the last 35 years, there is not a single definitive document that contains all of the SIP requirements.

For purposes of the SIP, Nevada is divided into three jurisdictions: Nevada Division of Environmental Protection (NDEP); Clark County, which houses Las Vegas; and Washoe County, which houses the Reno-Sparks metropolitan area. The Clark County Department of Air Quality and Environmental Management and the Washoe County District Health Department Division of Air Quality Management have been delegated the responsibility to complete SIP requirements for their respective county areas. NDEP is responsible for the rest of the state.

Depending on the type of application and class of facility, the timeframe that BAPC is required to issue a permit will vary. See the Permit Guidance webpage which lists review time for different types of permits.

Retrieved from "https://openei.org/w/index.php?title=RAPID/Roadmap/15-NV-a&oldid=887365"
Categories:
OpenEI is developed and maintained by the National Renewable Energy Laboratory with funding and support from the U.S. Department of Energy and a network of International Partners & Sponsors.