Federal and state laws protect certain biological resources from particular impacts. Each project is required to assess the impacts it may have on protected flora and fauna as well as impacts on their habitat.

Vegetation and topsoil removal during project construction, including the development of associated access roads, parking areas, transmission lines, can lead to loss of wildlife habitat, reduction in plant diversity, potential for increased erosion and the potential for the introduction of invasive or noxious weeds. Indirect impacts to vegetation could increase deposition of dust, spread of invasive or noxious weeds, and the increase potential of wildfires. In addition, adverse impacts to wildlife could occur during construction from:

Wildlife would be most affected by habitat reduction within the project site, access roads, canals, and pipeline and transmission right-of-ways. Wildlife within surrounding habitats might also be affected if the construction activity (and associated noise) disturbs normal behaviors, such as feeding and reproduction.

State level protections may be even more stringent, protecting species and habitat not protected under federal law. It is critical to consult with area experts early in order to determine whether a conflict with protected biological resources can be avoided by choosing an alternative site for development. It may also be helpful to determine a time of year for development that does not conflict with wildlife. 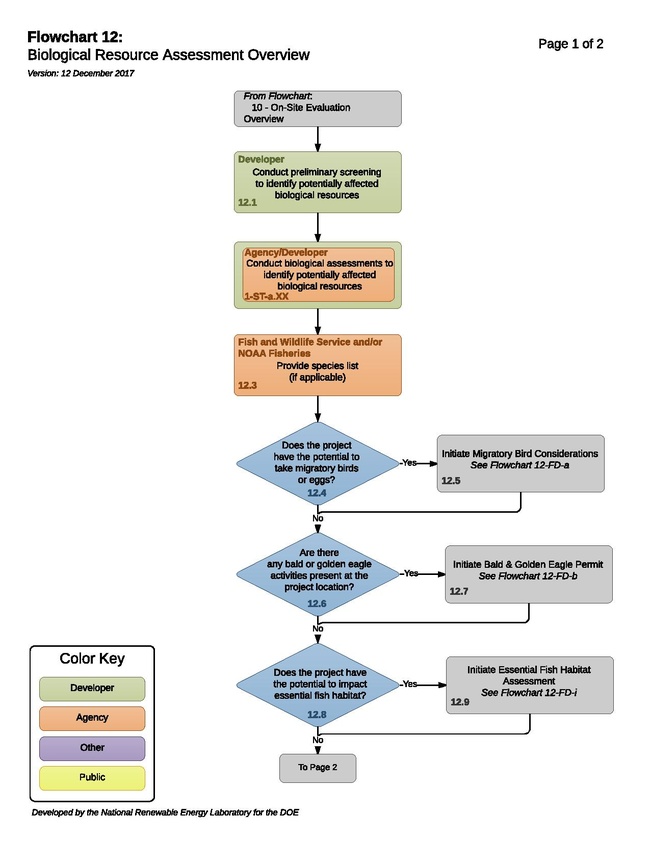 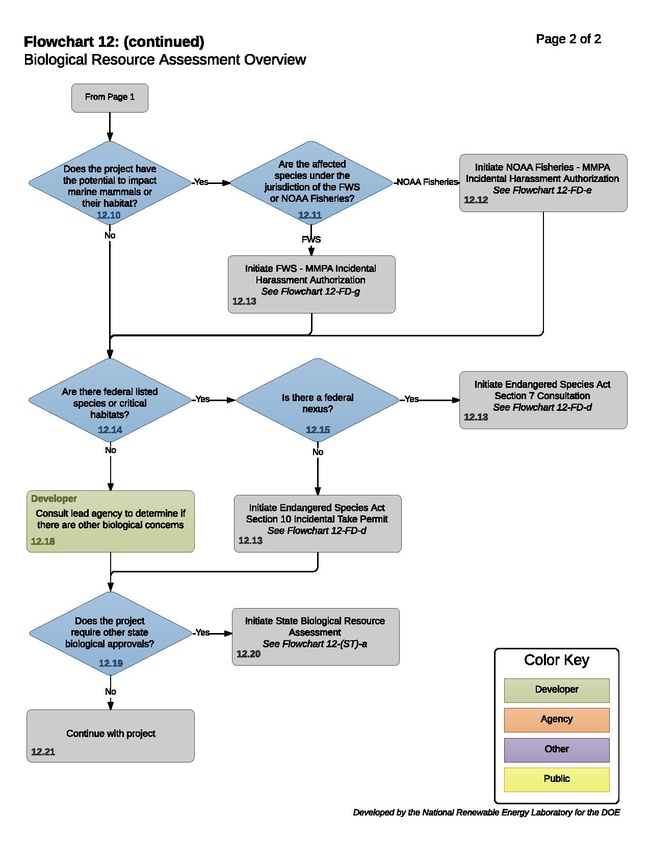 A developer should use some mechanism to conduct a preliminary screening that identifies biological resources that may be affected by the project. For example, the Western Association of Fish and Wildlife Agencies has a Crucial Habitat Screening Tool (CHAT), available at the CHAT website. While not mandatory, this step can help identify major biological issues at the outset that could critically affect the project. In addition, conducting a preliminary screening can support a finding that subsequent biological surveys are unnecessary.

Upon written request, the U.S. Fish and Wildlife Service (FWS) and/or the National Oceanic Atmospheric Administrative Fisheries (NOAA Fisheries), also known as the National Marine Fisheries Service (NMFS), must provide the developer with a list of ESA-listed resources within the project (action) area.

A list of bird "Species of Concern" identified by the Migratory Bird Program Strategic Plan 2004-2012 can be found as an attachment to the Bureau of Land Management’s (BLM) Bird Species of Conservation Concern List.

12.6 to 12.7 – Are there Any Bald or Golden Eagle Activities Present at the Project Location?

12.8 to 12.9 – Does the Project have the Potential to Impact Essential Fish Habitat?

A developer should consider the proposed projects impact on essential fish habitat. Where the project could impact fish habitat designated by NOAA Fisheries (also known as the National Marine Fisheries Service (NMFS)) as Essential Fish Habitat, pursuant to the Magnuson-Stevens Fishery Conservation and Management Act (Magnuson-Stevens Act), the authorizing agency is required to submit an Essential Fish Habitat Assessment to NOAA Fisheries.

The Magnuson-Stevens Act, as amended by the Sustainable Fisheries Act of 1996, established procedures to require federal agencies to identify, conserve, and enhance Essential Fish Habitat for species regulated under a Fisheries Management Plan (FMP). Under the Magnuson-Stevens Act, federal agencies must consult with the NOAA Fisheries on all “federal actions” including, all actions proposed, authorized, funded, or undertaken, that may adversely affect Essential Fish Habitat. 16 U.S.C. § 1855.

NOAA Fisheries is the federal agency responsible for the management, conservation, and protection of the nation’s marine and anadromous species. Anadromous species are those species of fish which spawn in fresh or estuarine waters and migrate to ocean waters. Salmon and other ecologically and economically important migrating fish species, such as shad and sturgeon, need access to freshwater habitat for spawning and rearing their young. Some fish need to swim thousands of miles through oceans and rivers to reach their destination.

12.10 to 12.13 – Does the Project have the Potential to Impact Marine Mammals or Their Habitats?

A developer should consider the proposed projects impact on marine mammals and their habitats. The Marine Mammal Protection Act of 1972 (MMPA), as amended (USC 1361 et seq.), prohibits, with certain exceptions, the taking (e.g., harassment, injury, or killing) of marine mammals in U.S. waters and by U.S. citizens on the high seas, and the importation of marine mammals and marine mammal products into the U.S.)

Sections 101(a)(5)(A) and (D) of the MMPA may allow for the authorization of the incidental, but not intentional, taking of small numbers of marine mammals by U.S. citizens who engage in a specified activity (other than commercial fishing) within a specified geographical region if certain findings are made and either regulations are issued or, if the taking is limited to harassment, a notice of a proposed authorization is provided to the public for review. An authorization for incidental takings may be granted if the taking will have a negligible impact on the species or stock(s), will not have an adverse impact on the availability of the species or stock(s) for subsidence uses (where relevant), and if the permissible methods of taking and requirements pertaining to the mitigation, monitoring, and reporting of such takings are set forth.

The developer should contact the appropriate FWS or NOAA Fisheries office to discuss conclusions and obtain guidance in preparation of a request for incidental take authorization. For more information, see:

A developer should consider the proposed projects impact federally listed species and critical habitat. Listed species include both endangered species and threatened species as defined under the Endangered Species Act (ESA). The term ‘‘endangered species’’ means any species which is in danger of extinction throughout all or a significant portion of its range other than a species of the Class Insecta determined by the Secretary to constitute a pest whose protection under the provisions of this Act would present an overwhelming and overriding risk to man. Endangered Species Act, 16 U.S.C § 1532 (6). A “threatened species” means a species likely to become an endangered species within the foreseeable future throughout all or a significant portion of its range. For the most part, terrestrial or land-based species are under the jurisdiction of FWS, and marine species and anadromous fish are mostly under the jurisdiction of NOAA Fisheries.

Under Section 7 of the ESA, federal agencies are required to ensure that any actions they undertake do not jeopardize the existence of any listed species, or destroy or adversely modify designated critical habitat of such species. If a listed species or critical habitat may be present and affected, the agency must provide the NOAA Fisheries or the FWS with an evaluation on the likely effects of the action on species that may be adversely affected. The ESA Section 7 consultation requirements apply to development projects that have a federal nexus. Examples of actions that constitute a federal nexus include:

If the proposed project does constitute a federal nexus, the developer should initiate the ESA Section 7 Consultation process. For more information, see:

If the proposed project does not constitute a federal nexus, the developer may be required to obtain an ESA Section 10 Take Permit. For more information, see:

12.18 – Consult Lead Agency to Determine If There Are Other Biological Concerns

Even where there is seemingly no potential for the project to affect migratory birds, bald or golden eagles, marine mammals, federally listed species or critical habitats, developers should consult with the lead agency, either FWS or NOAA Fisheries, to ensure that the project does not pose a threat to any other biological resources as mandated by law or regulation.

12.19 to 12.21 – Does the Project Require Other State Biological Resource Approvals?

Currently, the RAPID Toolkit does not have state specific information regarding biological resource protection approvals for bulk transmission projects.

Retrieved from "https://openei.org/w/index.php?title=RAPID/Roadmap/12_(2)&oldid=968874"
Categories:
OpenEI is developed and maintained by the National Renewable Energy Laboratory with funding and support from the U.S. Department of Energy and a network of International Partners & Sponsors.