There are many types of Geothermal Technologies that take advantage of the earth's heat:

Hydrothermal Systems:
A hydrothermal system is one that included fluid, heat, and permeability in a naturally occurring geological formation for the production of electricity.
Other definitions:Wikipedia Reegle 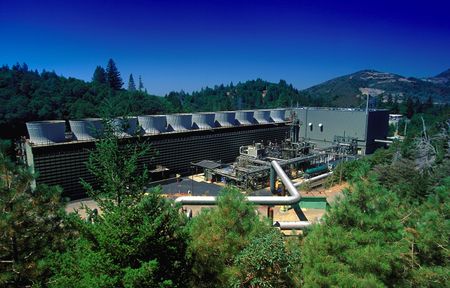 "To search efficiently for blind geothermal systems, general geographic regions must first be identified based upon gross characteristics which together imply favorable heat flow, fluid flow, and permeability. Geothermal occurrence models seek to strategically identify those promising locations to focus exploration efforts and investment. In so doing, such models can increase the expected success rate of exploratory drilling, reduce risk, and attract investment." (reference: https://pangea.stanford.edu/ERE/db/GeoConf/papers/SGW/2013/King.pdf)

There are a number of exploration techniques used to explore for both visible and hidden or "blind" hydrothermal systems. Geothermal exploration is commonly separated into phases - a set of techniques that the developer will use to determine if a location is worth investigating further. Many geothermal developers define phases based on economic considerations and permitting requirements. Typically a developer will perform the least expensive techniques earlier on in the exploration program to reduce the risk of drilling a well with inadequate temperatures or flow. For example many developers will start with a desktop analysis, which includes a review of existing exploration techniques, a site visit, and in some cases inexpensive remote sensing techniques. If that set of techniques shows favorable conditions the developer will move on to the next phase. It is not uncommon for developers to start exploration at 5-10 locations and only drill at 1 location.

Three geothermal power plant technologies are used to convert hydrothermal fluids to electricity[2]: dry steam, flash, and binary cycle. The type of conversion technology used depends on whether the fluid is present as steam or water, and its temperature.

Retrieved from "https://openei.org/w/index.php?title=Hydrothermal_System&oldid=943264"
Categories:
OpenEI is developed and maintained by the National Renewable Energy Laboratory with funding and support from the U.S. Department of Energy and a network of International Partners & Sponsors.