There are many types of Geothermal Technologies that take advantage of the earth's heat:

Co-Produced Geothermal System:
Co-Produced water is the water that is produced as a by-product during oil and gas production. If there is enough water produced at a high enough temperature co-produced water can be utilized for electricity production.
Other definitions:Wikipedia Reegle 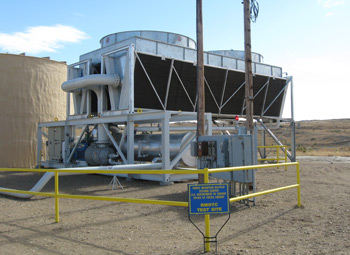 A Co-Produced Geothermal System is a geothermal system that uses water that is produced as a by-product during oil or gas production.[1] The water that is co-produced in a typical oil and gas operation is re injected back into the ground. The costs associated with managing the co-produced water can eventually reach a level that will outweigh the profits that would be possible from the oil or gas well. Once the water management reaches this level, the oil or gas production will come to a stop. Co-Produced geothermal systems can reduce the costs of the water management by producing electricity that can be used in the well field, or can be sold back to the grid. Binary Cycle Power Plants are the most likely candidate for electrical generation when considering co-produced geothermal systems because they do not require the the geothermal fluid to be in a vapor state, such as in a Flash Steam Power Plant.

Retrieved from "https://openei.org/w/index.php?title=Co-Produced_Geothermal_Systems&oldid=943207"
Categories:
OpenEI is developed and maintained by the National Renewable Energy Laboratory with funding and support from the U.S. Department of Energy and a network of International Partners & Sponsors.