Wave energy (or wave power) is the transport and capture of energy by ocean surface waves. The energy captured is then used for all different kinds of useful work, including electricity generation, water desalination, and pumping of water. Wave energy is also a type of renewable energy and is the largest estimated global resource form of ocean energy.

The first patent in wave energy happened in Paris in 1799. Monsieur Girard and his son proposed using direct mechanical action to drive heavy machinery, including mills, saws, and pumps. 1 After the first patent, thousands more followed. There were 340 from 1855 to 1973 in the UK alone. Another early application was in 1910. Bochaux Praceique developed a device to light and power his house. This application was also in France. 2

The pioneer for modern wave energy was Yoshio Masuda, a Japanese naval commander. Masuda tested multiple different wave-energy devices at sea, and several hundred of these units were used to power navigation lights. Masuda is also credited for different wave-energy inventions, such as the KAIMEI, a large barge used as a testing platform, and the Oscillating Water Column, which was initially used for small-scale navigation. 3

Wave energy got a new interest in the 1970s during the oil crisis on 1973. In 1973, member of the Organization of Arab Petroleum Exporting Countries (OAPEC) decided to put a prohibition on oil exports, which in turn caused people to look for alternative energies. 4 These new pioneers included Stephen Salter, famous for inventing the Salter's Duck, or nodding duck which converted wave power into electricity. 5 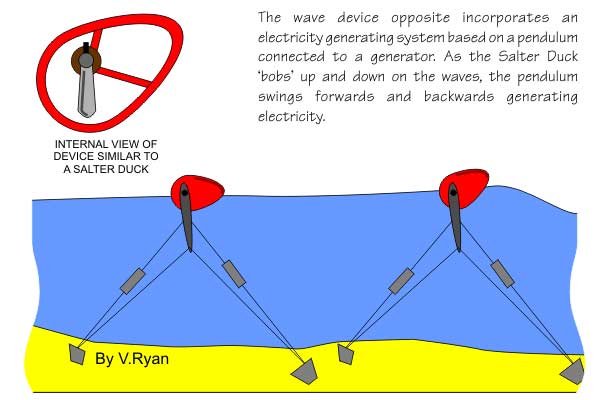 Abosorbers extract energy from the rise and fall of the waves with a buoy. Once the energy is extracted it is then converted to electrical energy with a linear or rotary generator. 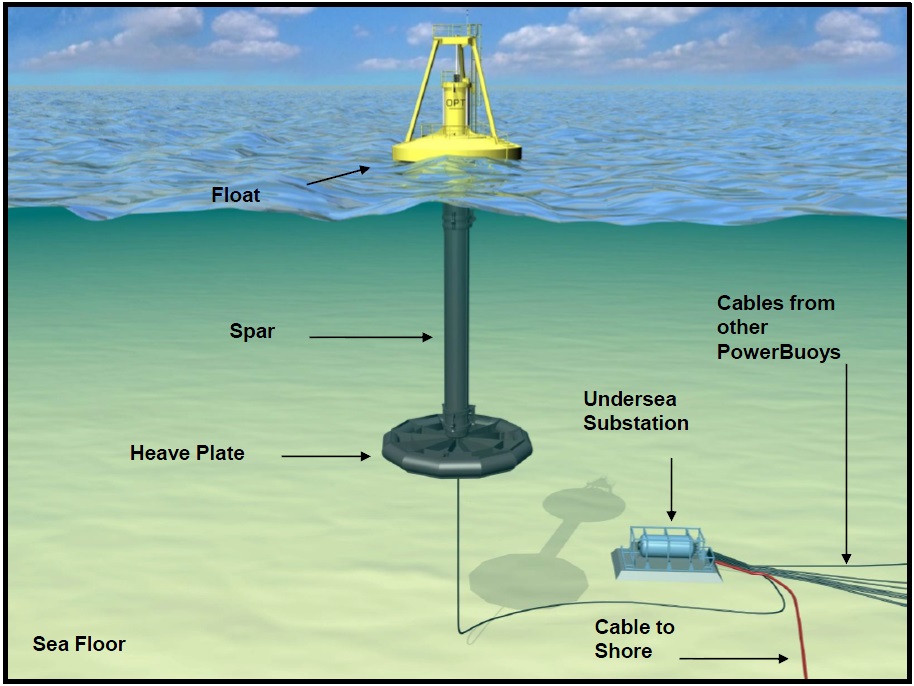 Attenuators capture energy by being placed perpendicular to the length of the wave, this causes the attenuator to contentiously flex where segments are connected. This connection is then connected to hydraulic pumps which convert the energy. 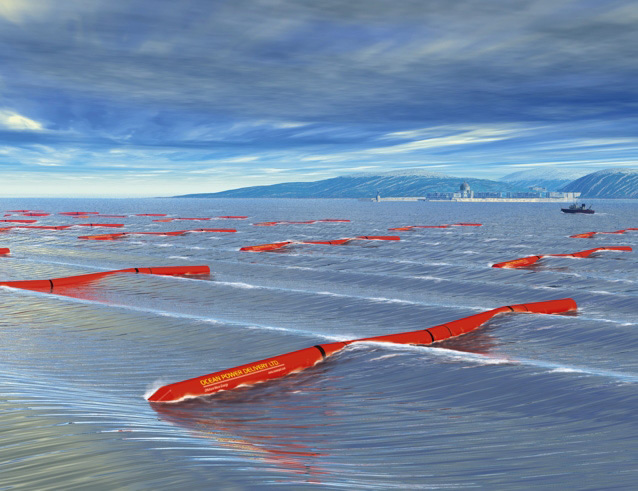 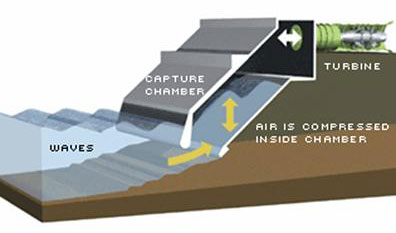 Overtopping has a wave lift over a barrier which fills a reservoir with the water and is then drained through a hydro turbine. This technology is very similar to a conventional hydropower dam.

Inverted-Pendulum device uses the motion of waves to move a hinged paddle back and forth. The motion of the paddle drives hydraulic pumps which drives electrical generators.

Since wave energy is still relatively new, there are fewer areas that currently have or are installing wave farms. Some main areas for wave farms are Portugal, the United Kingdom, Australia, and the United States.

Portugal has the very first wave farm, the Aguçadoura Wave Farm. It's about 3 miles offshore, north of Porto, and was designed to use 3 Pelamis wave energy converters. It has an installed capacity of 2.25 MW, and was officially opened in September, 2008. Due to the financial collapse from an economic crisis, however, it was shut down.

United Kingdom. In May, 2010, a wave farm (currently 66 machines) was launched in Scotland. It was announced in 2007 and cost over 4 million pounds, equivalent to $5.9 million dollars.

Off the north coast of Cornwall, England, the Wave hub facility acts as a giant extension cable. It allows 20 MW to be connected to it, but could go up to 40 MW. It also could end up powering up to 7,500 households and save around 300,000 tons of CO2 in the next 25 years.

Australia have wave farms that are currently under development off the West coast and near Portland, Victoria. Both of these projects are targeted to cost upward of $65 million. There is also a greenWave device off of Southern Australia.

United States The United States was to have a wave farm off of the West coast by Oregon. The Reedsport farm was supposed to be installed in 2013, but due to legal and technical problems, the project came to a halt.

There are also possibilities in Russia and Italy for potential wave farms.

Wave energy has a lot of potential. Oceans cover 71% of the Earth, so it's very accessible. Wave energy also has many different positive aspects. First, the energy is green. Harnessing wave energy doesn't emit any harmful gases, and it can easily replace energies that do, such as using fossil fuels. Second, the energy is renewable. Ultimately, the energy is caused by heat which is emitted from the Sun, and this energy will not be disappearing any time soon. Third, there is an incredible potential in wave energy. For every meter of wave along the shore, the energy density is between 30 kW and 40 kW. The Electric Power Research Institute (EPRI) analyzed the potential, and for the U.S. alone, there is a potential of about 2,640 TWh/y along the continental shelf edge. 6 Fourth, wave energy is reliable. Solar always needs the Sun, and wind energy always needs the wind to work. Since waves are essentially always in motion and are never interrupted, it's a reliable source compared to others.

However, as with any energy resource available, there are negatives as well. Wave energy effects the environment. As with wind farms being an eye-sore, wave energy could cause conflicts with appearance of oceans, which in turn could conflict with tourism and local acceptance. It is also currently unclear on how harvesting wave energy affects marine life. Because of these, installations on the coast and land facilities are held to higher restriction on size and location for wave energy farms. Wave energy also has issues in terms of cost. It still is in the early stages of development, so costs of wave power are still fairly high compared to other forms of technology. Wave energy devices also require regular maintenance which isn't cheap either.

Overall, wave power has some disadvantages as of now, but the potential is enormous. 7

Retrieved from "https://openei.org/w/index.php?title=Wave_Energy&oldid=815683"
OpenEI is developed and maintained by the National Renewable Energy Laboratory with funding and support from the U.S. Department of Energy and a network of International Partners & Sponsors.