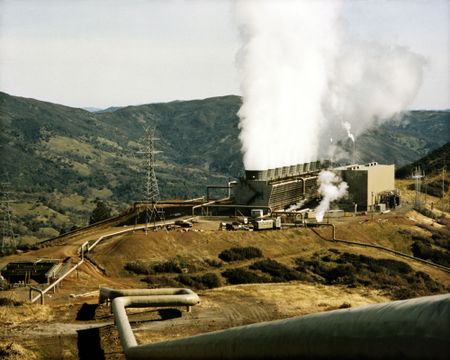 The Geysers in northern California is the world's largest producer of geothermal power. The dry-steam field has successfully produced power since the early 1960s when Pacific Gas & Electric installed the first 11-megawatt plant. The dry steam plant consumes water by emitting water vapor into the atmosphere.

Note that in some states, such as Colorado, geothermal fluid is considered a water resource, and therefore, a water right must be obtained if any of the water is to be used consumptively. See the Geothermal Regulatory Roadmap for details on how your state addresses water rights concerns.

Water Use in Geothermal Fluid

Water Use in Cooling

The power sector withdraws more water than any other sector in the United States, mostly due to cooling requirements. Geothermal is no exception, and can require between 1,700 and 4,000 gallons of water per megawatt-hour of electricity produced. The impact of water consumption can be reduced in a geothermal plant by using geothermal water for cooling instead of freshwater,[3] or by using alternative, less water-intensive methods of cooling, such as air cooling or hybrid cooling systems.

In smaller quantities, water may be needed on a temporary basis for well field development for things such as dust suppression, drilling fluid, and reservoir stimulation. Small amounts of water may also be needed for washing and bathroom facilities for the power plant.

Geothermal Regulations and Permitting for Water Use

For information about regulations and permitting related to water use for geothermal projects, see the Regulatory and Permitting Information Desktop Toolkit.

Retrieved from "https://openei.org/w/index.php?title=Geothermal/Water_Use&oldid=960896"
Categories:
OpenEI is developed and maintained by the National Renewable Energy Laboratory with funding and support from the U.S. Department of Energy and a network of International Partners & Sponsors.