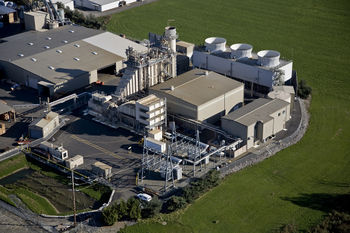 Combined Heat and Power (CHP), or Cogeneration, describes the process of using a heat engine or power station to simultaneously produce electricity and useful heat. All thermal power plants produce waste heat during the production of electricity; cogeneration makes use of this wasted heat. This differs from Trigeneration, or Combined Cooling, Heat, and Power (CCHP), which produces useful cooling along with heating and electricity as in Cogeneration.

Every year, the heat waste produced in the generation of power in the U.S. is greater than the total energy use in Japan.[1] This wasted energy is cut in half by CHP. The U.S. has currently installed more than 82 gigawatts (GW) of power from Cogeneration units, which accounts for 8% of production capacity. Based on energy goals set forth by President Obama, the implementation of Cogeneration will increase.

Cogeneration technologies are termed "topping cycles" if the electric or mechanical power is produced first, and the thermal energy exhausted from power production is then captured and used, as with gas turbines.[2] These technologies are termed "bottoming cycles" if the systems produce high thermal energy (such as steel reheating or aluminum remelting), and then recover the waste heat to produce electricity or mechanical power. 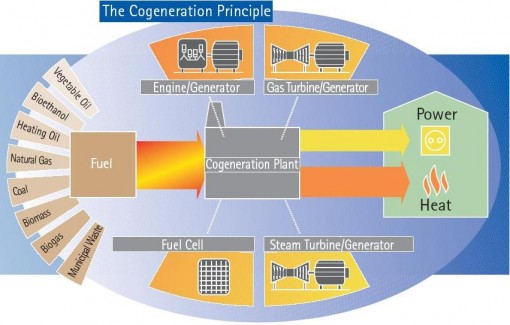 Cogeneration plants can use the waste heat from power production to create electricity, or they can make use of the waste heat in other ways. The CHP plant shown above, located in Sumas, Washington, has the ability to produce electricity or use excess heat to treat wood products.[3] This plant is one of several owned by Puget Sound Energy in Washington State. A CHP plant is being designed to produce 18 MW for the U.S. Capitol building and Congressional buildings as well.[1] Cogeneration is becoming increasingly prevalent in the U.S. because the use of waste heat can improve efficiency of systems up to 80%.[5]

Currently, economically feasible CHP operations recover waste heat with temperatures above 500°F.[6] Aside from being used in electricity generation, CHP can be used in industrial practices as well. The most viable industrial applications include:

3. Petroleum Refining - Basic processes used in petroleum refineries include distillation (fractionation), thermal cracking, catalytic, and treatment. These processes use large amounts of energy, and many involve exothermic reactions that also produce heat. While modern refineries often recover excess heat from these processes, there are still processes which generate unused heat. For example, the exhaust from petroleum coke calciners is 900°F to 1000°F.

4. Chemical Industry - There are several major segments of the industry (petrochemicals, industrial gases, alkalies and chlorine, cyclic crudes and intermediates), plastics materials, synthetic rubber, synthetic organic fibers, and agricultural chemicals (fertilizers and pesticides), in which high-temperature exhaust is released that could be recovered for power generation. There are currently 5 CHP systems in U.S. ethanol plants, which have a combined capacity of 17 MW.

6. Natural Gas Compressor Stations - There are more than 20 Cogeneration systems installed at natural gas compressors in North America, which have a capacity of 105 MW.

7. Waste to Energy Systems - Landfills that use reciprocating internal combustion engines or turbines to produce power could generate additional power with CHP systems using exhaust gases. Small scale WTE systems are only marginally economically without the employment of Cogeneration.

8. Oil and Gas Production - There are a number of flared energy sources in oil and gas production that could utilize CHP.

A good example of Cogeneration can be seen with the proposed design of the University of Calgary's new natural gas power plant[7]. 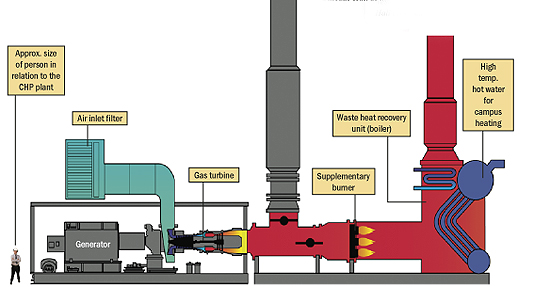 The proposed plant will produce 12 megawatts (MW) of electricity (the equivalent of powering 12,000 homes), produce less noise pollution, and make the campus more self-sufficient. The University of Calgary is interested in this design, however, because of the Cogeneration aspects. As seen in the diagram above, the plant will operate a combined cycle gas turbine to produce electricity. The natural gas turbine operates on the Brayton cycle, which typically has an efficiency around 30%.[8] From here, waste heat is recovered from the exhaust by the Rankine cycle (through a waste heat recovery unit.) This brings the overall efficiency of the system up to 50-60%. From there, more heat is recovered from the exhaust by the incorporated hot water system. This system will bring hot water (205°C) to the campus through underground pipes and tunnels, supplying space heating and hot water. Overall, the efficiency of the system can reach 75%. The University of Calgary claims that this will effectively 'retire' their existing heating equipment.

The image on the left shows the Coors brewery in Golden, CO. The energy needs of the facility are met by a coal and natural gas plant housed on-site.[9] This boiler system at the facility includes one large boiler capable of burning coal or natural gas, and three smaller exclusively natural gas boilers. The three smaller boilers are used during maintenance of the larger coal boiler. Steam produced by these boilers, at high pressure (800 psig), is fed into three turbines with a total capacity of 40 MW. Two of these turbines are duel-extraction turbines, which output steam at both medium (400 psig) and low (50 psig) pressure. The medium pressure steam is primarily used for steam chilling processes, which exhaust into the low pressure steam. The low pressure steam is used for processes including brewing, malting, container manufacturing, and domestic heating and cooling at the neighboring Colorado School of Mines.

GDF Suez manages the energy production at the MillerCoors facility, which produces a base load of 20 MW with an overall efficiency of 60% (made possible by Cogeneration practices). The facility produces more than a million gallons of beer per day.

Utilities continued to become more sophisticated and prevalent, and they also became more protective of their market. By the 1970s, Cogeneration was targeted by a number of anti-competitive tactics that restricted its growth. These tactics include refusing to purchase power from Cogenerators and prohibiting customers from connecting to Cogenerators. The Public Utility Regulator Act of 1978 (PURPA) was designed to combat these practices and promote Cogeneration because of its efficiency benefits. The provisions stated in PURPA addressed many of the regulatory and competitive barriers limiting the use of Cogeneration. Also, it provided the opportunity to sell electricity to utilities at a higher price, which stimulated the development of non-utility generators.

One of the unforeseen results of PURPA was the development two separate markets within industrial Cogeneration: traditional and non-traditional. Traditional Cogeneration facilities provide steam to industries as their primary function. Non-traditional facilities are designed to produce electricity for sale to utilities, with steam as a secondary product.

With the recent goals set by President Obama, as well as the current energy market growth, Cogeneration is likely to see a similar increase in utilization that was seen at the implementation of PURPA. With the current shift to more energy efficient systems, older coal power plants are being shut down and new natural gas plants are being put in place. This presents an enormous opportunity for CHP to grow in the near future.

Many U.S. states have incentives for the installation of CHP units, ranging from commercial to state governments, from industrial sectors to private sectors. These incentives aim to reduce business costs, create jobs, and reduce carbon pollution.[1]

State incentives are used in Cogeneration deployment to increase the use of technologies that benefit state residents, as well as the state overall.[11] These incentives take various forms: loans, grants, tax exemptions, rebates, and bonds.

Retrieved from "https://openei.org/w/index.php?title=CHP/Cogeneration&oldid=815799"
OpenEI is developed and maintained by the National Renewable Energy Laboratory with funding and support from the U.S. Department of Energy and a network of International Partners & Sponsors.