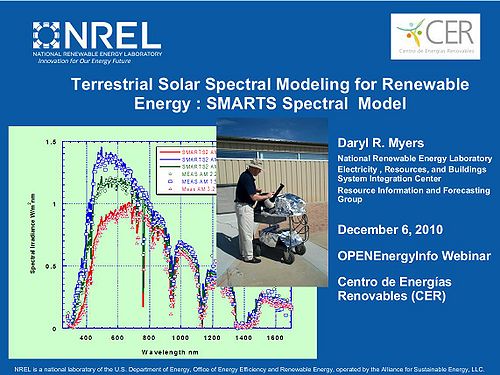 Note: An RSVP is required to ensure that we have enough phone lines and/or seats. The speaker will present from the Golden, Colorado, office. The National Renewable Energy Laboratory (NREL), the DOE/Energy Efficiency and Renewable Energy Office (EERE), and the Chilean Renewable Energy Center will present a FREE webinar on the SMARTS Model for Latin American countries. This model can increase the accuracy of production and variability estimates for renewable energy projects and reduce project risks in the region. The Simple Model of the Atmospheric Radiative Transfer of Sunshine, or SMARTS, predicts clear-sky spectral irradiances, the variation in light energy amplitude with wavelength. SMARTS computes how the atmosphere affects the distribution of solar power or photon energy for each wavelength of light. Variations in solar spectral power distributions impact performance of photovoltaic and other spectrally selective materials. Researchers use SMARTS in the fields of architecture, atmospheric science, photobiology, and health physics. SMARTS is a medium complexity model that requires significant experience and knowledge of basic physics and atmospheric science. It is therefore used primarily by researchers and engineers. This presentation will discuss the technical background behind SMARTS and other solar spectral models, operation of SMARTS, examples of renewable energy applications, and availability of the SMARTS model. "

Daryl Myers is presently task leader for the U. S. Solar Energy Technology Program Solar Radiation Measurements and Modeling Task. He has a B.S. in Applied Mathematics from the University Of Colorado School Of Engineering. He spent four years in the U.S. Army as a Russian Linguist; and four years as a physicist at the Smithsonian Institution Radiation Biology Laboratory before joining the U.S. Department of Energy Solar Energy Research Institute (SERI) in 1978. In 1992, SERI became the National Renewable Energy Laboratory (NREL). Daryl has worked for 37 years in the area of broadband and spectral solar radiation instrumentation, calibration, measurements, modeling, and uncertainty analysis to support the needs of renewable energy technologies. He is a member of the Alternative Energy and Weathering and Durability committees of the American Society for Testing of Materials, and International Lighting Commission (CIE) Division 2 on radiometric measurements. He has contributed to the development and validation of the National Solar Radiation Database (NSRDB) for the US, and developing standard reference spectral distributions for several applications. He is author or co-author of over 60 peer reviewed publications and 100 conference papers and presentations in his field."

Retrieved from "https://openei.org/w/index.php?title=Webinar-Terrestrial_Solar_Spectral_Modeling_for_Renewable_Energy:_SMARTS_Model&oldid=374991"
Categories:
OpenEI is developed and maintained by the National Renewable Energy Laboratory with funding and support from the U.S. Department of Energy and a network of International Partners & Sponsors.