Almost any project may have effects on various biological resources protected by federal law. Early consultation with the U.S. Fish and Wildlife Service (USFWS) is the primary method of determining the most advantageous site and time for development in order to avoid issues with protected species and avoid delay in processing environmental analysis. During preliminary screening, developers should consider migratory birds, bald and golden eagle habitat, protected marine mammals and endangered and threatened species. If preliminary screening reveals the presence of protected biological resources, the developer will likely need one or more permits or authorizations from the USFWS or the National Marine Fisheries Service (NMFS). Most permits require a biological survey, as part of the NEPA process, to determine if the “take” of a protected biological resource will occur. Generally, “take” includes the harassment or killing of the protected biological resources, whether intentional or incidental, and can also include activities that affect habitat in such a way that may result in take.

The Migratory Bird Treaty Act (MBTA) protects migratory birds and their nests and eggs, from “take” unless authorized by permit or regulation. Developers are encouraged to consult with the USFWS and state wildlife agencies to determine if the project has the potential to take migratory birds in violation of the MBTA.

The MBTA is a strict liability statute and neither the MBTA nor the current implementing regulations include a specific provision that would permit incidental take. Consultation with USFWS biologists should result in identifying project-related stressors and available protective measures during development. Developers are encouraged to implement those measures prior to and during construction and operation of facilities.

Whereas developers can choose to consult with the USFWS, federal agencies taking actions that have, or are likely to have, a measureable negative effect on migratory bird populations are required, under Executive Order 13186: Responsibilities of Federal Agencies to Protect Birds (EO 13186), to act in a way that protects migratory birds and their habitats. Specifically, EO 13186 states that federal agencies should integrate bird conservation principles into agency actions and planning. Such integration includes developing and implementing conservation measures that avoid the production of project-associated stressors or minimize the exposure of stressors to birds and the resources they depend on. Generally, federal agencies will integrate migratory bird considerations and protection into the NEPA process.

The Bald and Golden Eagle Protection Act (“Eagle Act”) prohibits developers from “taking” bald or golden eagles (collectively, Eagles) unless authorized by permit or regulation. For projects that may result in the take of Eagles, developers will most likely need to obtain a Nonpurposeful Eagle Take Permit from the USFWS. The implementing regulations for Eagle take permits are codified at 50 CFR 22.26.

Certain projects may result in the taking of endangered or threatened species covered under the Endangered Species Act (ESA). The USFWS and/or the NMFS (collectively, “the Services”) are responsible for issuing permits authorizing the incidental take of threatened or endangered species that is consistent with the conservation of the species. An incidental take permit (ITP) does not authorize the underlying activities that may result in take.

Developers applying for an ITP are required to submit a Habitat Conservation Plan (HCP). A significant part of the application, the HCP specifies the impacts that are likely to result from the taking and the measures the developer will undertake to minimize and mitigate such impacts. 16 USC 1539(a)(2)(A).

ITPs only apply for non-Federal activities that will result in take of treated or endangered species. The USFWS or NMFS must conduct internal ESA Section 7 consultation prior to issuing an incidental take permit.

Developers can request an early Section 7 consultation prior to filing an application for a permit or license. Consultation includes the developer, the action agency, and either the USFWS or NMFS. Consultation is either formal or informal, depending on whether the proposed project is likely to adversely affect species or critical habitat.

Section 101(a)(5)(A) of the MMPA authorizes the NMFS or the USFWS (the Services), depending on the type of marine mammal affected, to issue permits for the incidental take of marine mammals.

If there is the potential for mortality or serious injury, the developer must obtain a Letter of Authorization (LOA) from the Service. If there is no potential for mortality (or serious injury under NMFS’ regulations), the developer can obtain an Incidental Harassment Authorization (IHA) from the Service, issued under section 101(a)(5)(D), for no more than a 1-year period. 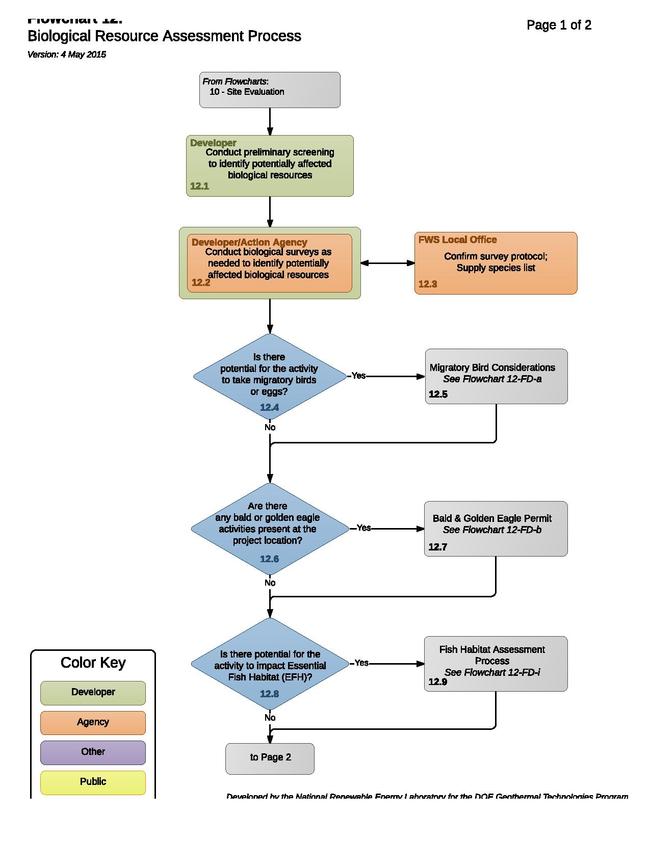 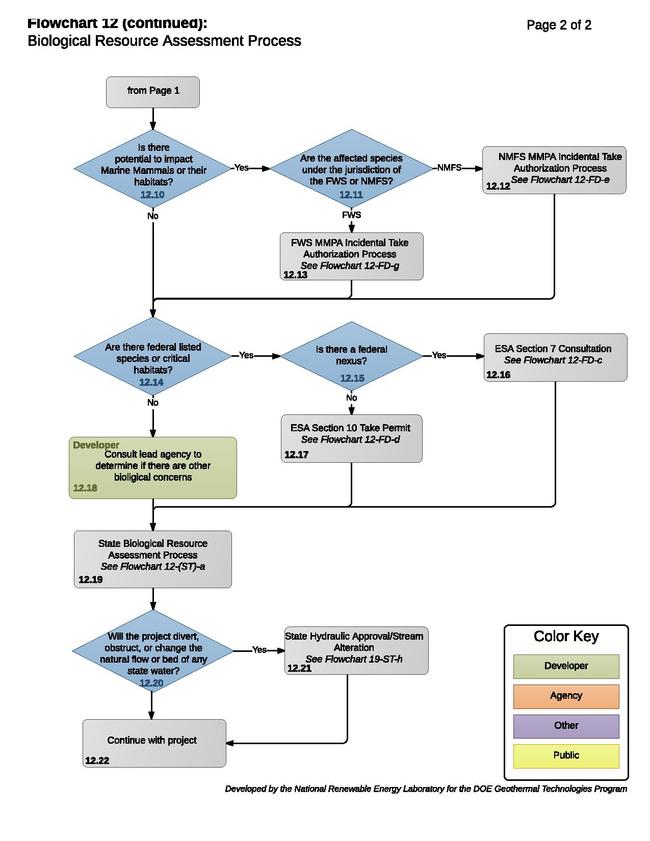 RAPID-Overview(Tech-Jurisdiction-Topic)
Retrieved from "https://openei.org/w/index.php?title=RAPID/Solar/Federal/Biological&oldid=939206"
Categories:
OpenEI is developed and maintained by the National Renewable Energy Laboratory with funding and support from the U.S. Department of Energy and a network of International Partners & Sponsors.