If the state project also triggers NEPA, Montana law allows for state and federal coordination of a single environmental review that would satisfy both MEPA and NEPA.

Montana agencies are also permitted to complete joint environmental reviews with a single lead agency. If there is a dispute over which agency should take primary responsibility for the task, the governor may resolve the dispute.

A series of agency initiated actions should undergo programmatic review in order to facilitate the efficient environmental review of the entire project, rather than forcing the agencies to undergo multiple reviews in a piecemeal fashion.

The statutory time limits under MEPA includes a 60 day limit for scoping and a 90 day limit for completing the environmental review. However limits may be extended if reasonable.

A fee charged to the applicant for all environmental reviews that cost the agency more than $2,500. Fees are only to be used for expenses associated with gathering data. 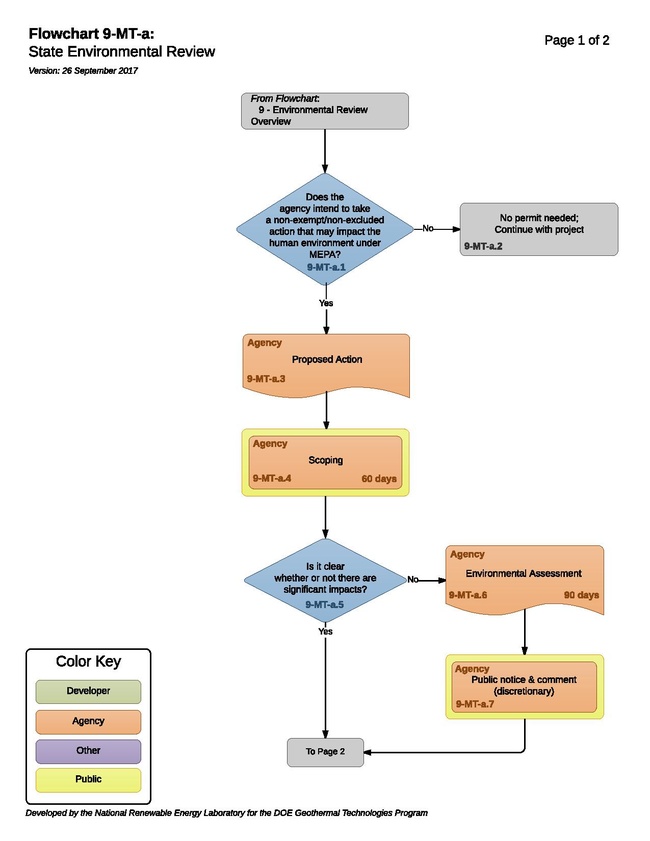 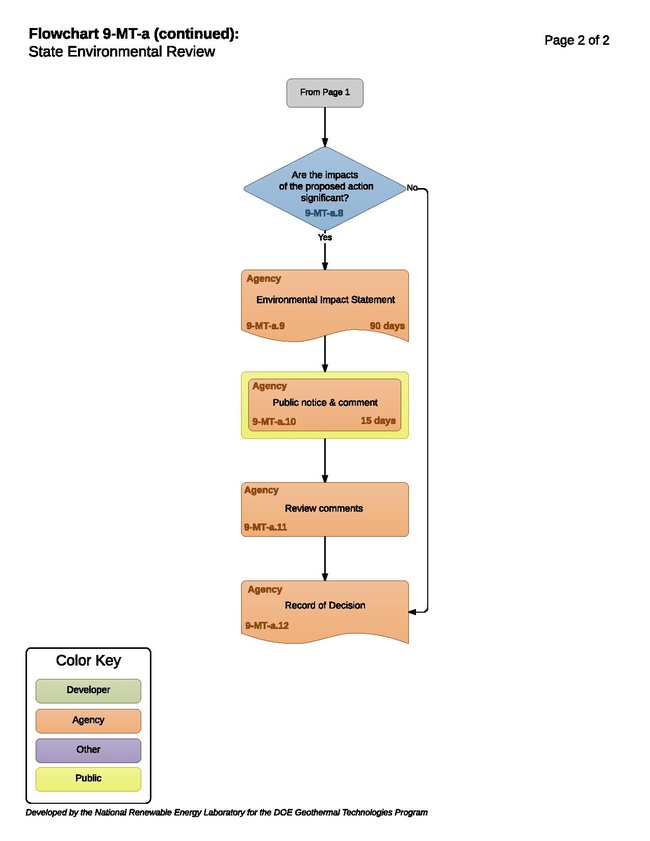 9-MT-a.1 - Does the agency intend to take a non-exempt/non-excluded action that may impact the human environment under MEPA?

Under ARM 17-4-607(5) the following categories need not proceed under MEPA:

rule or programmatic review, the agency shall identify any extraordinary circumstances in which a normally excluded action requires an EA or EIS;

When the agency determines further environmental review is not required, the agency should document the conclusion in a written record of the administrative determination.

The agency must prepare a document thoroughly describing the proposed action in preparation of scoping.

MEPA scoping is similar to NEPA scoping. Scoping is the formalized method of determining the issues relevant to the proposed action. Public participation is typically encouraged in order to assist in identifying issues. An issue is basically an environmental conflict that is identified. Scoping assists in making an initial determination of potential alternatives that may mitigate impacts while achieving the objectives of the proposed action.

9-MT-a.5 - Is it clear whether or not there are significant impacts

Whenever it is unclear whether the proposed action is a major one significantly affecting the quality of the human environment, the agency should prepare an Environmental Assessment (EA). It is also permissible to prepare an EA in the event the statutory requirements do not allow sufficient time for the agency to prepare an Environmental Impact Statement (EIS). An EA is also permissible in instances that would normally warrant an EIS, but the effects are effectively mitigated.

Environmental assessment means "a written analysis of a proposed action to determine whether an EIS is required or to serve one or more of the other purposes in Rule III(2).

The preparation of an EA should be proportionate to the complexity and environmental sensitivity of the proposed action. An EA should include:

The public participation is intended to ensure a thorough agency decision and also to encourage accountability to the people of Montana.

Public review of an EA will vary with the complexity of the project and its anticipated environmental impacts. Any member of the public may request a copy of the EA for review. If there is a heightened level of interest in the proposed action, the agency may elect to provide meetings or hearings.

A list of completed EA's is submitted to the governor and the EQC. The final EA is forwarded to EQC.

9-MT-a.8 - Are the impacts of the proposed action significant

The MEPA Model Rules provide criteria to assist the agency in determining whether the impacts are significant. The recommended criteria includes:

See A Guide to the Montana Environmental Policy Act, page 10.

Agencies have particular steps in articulating the scope of an EIS. First the agency must invite other affected federal state and local government agencies, tribal governments, the applicant and any potentially interested persons or groups to participate in scoping. The consultation should focus on identifying the issues related to the proposed action that will require in depth analysis in the EIS. The agency should also identify issues that need only be mentioned in the document along with the justification for not providing extensive analysis of the issue. Issues adequately addressed in prior environmental reviews should be identified but need not be extensively discussed. A summary and reference to the coverage is sufficient.

An EIS should be analytic rather than encyclopedic. The depth of analysis should be proportionate to the issues' significance. If a particular issue is not significant, the EIS should identify the issue and explain why no further study is warranted.

The draft EIS must be distributed for public comment for 30 days.

Occasionally the draft EIS is sufficient and may be adopted as the final EIS. This decision will be made based on the quality and quantity of the substantive comments received during the notice and comment period. Within 30 days of the close of the public comment period, the agency may decide to adopt the draft EIS as the final draft. If the agency opts to adopt the draft EIS, the agency must notify the governor, the Environmental Quality Council, the applicant and all commenters. The notification must be accompanied by a copy of all comments or a summary of a representative sample of comments and an explanation of why the issues raised do not warrant the preparation of a final EIS. Public notice of the proposed adoption of the draft EIS as the final EIS must be posted at least 15 days before the adoption.

Copies should be distributed to the governor, Environmental Quality council, appropriate state and federal agencies, the applicant and any persons who submitted comments and other members of the public who request a copy.

The public should be encouraged to provide assistance in determining the scope of an EIS. Once the draft EIS is completed, the public should be provided a minimum of 30 days to provide comments. The agency may take the comments into consideration in revising the EIS to include responses to public concern. The final EIS should contain all public comments. Once the final EIS is prepared, the public must be given 15 days to comment on the final document.

Public hearings are addressed in Model Rule XXIII. Public hearings should be held after the draft EIS is circulated and before the final EIS is distributed. Hearings are announced in a "news release legal notice to newspapers of general circulation in the area to be affected by the proposed action." The notice should include an explanation of the type of testimony the agency desires to solicit. The threshold for holding a hearing is very low. Whenever the applicant, another agency, or 10% of the affected persons or an interested group with a membership of 25 or more requests a hearing within 20 days of the distribution of the draft EIS. When a hearing is not requested, the agency may hold informal meetings.

Copies should be distributed to the governor, Environmental Quality council, appropriate state and federal agencies, the applicant and any persons who submitted comments and other members of the public who request a copy.

The final administrative decision is appended to the final EA or final EIS.

Retrieved from "https://openei.org/w/index.php?title=RAPID/Roadmap/9-MT-a&oldid=950370"
Categories:
OpenEI is developed and maintained by the National Renewable Energy Laboratory with funding and support from the U.S. Department of Energy and a network of International Partners & Sponsors.