Information current as of 2021
California requires that any proposed project for the construction of transmission line facilities of 200 kV or more must obtain a Certificate of Public Convenience and Necessity (CPCN) from the California Public Utilities Commission (CPUC). The CPUC is the primary transmission siting agency in California, but the CPUC also works closely with the California Energy Commission (CEC), as well as local city or county agencies. The CPUC essentially conducts a two-step review process when determining whether to issue a CPCN. The first step is an analysis of the reliability and need for the proposed project. The first step of the process is handled by an Administrative Law Judge (ALJ). The second step consists of an environmental review of the proposed project and determines whether the project will have any adverse environmental impacts. The second step of the CPCN process may be conducted by the CPUC, lead agency, or the CEC, depending on which agency has jurisdiction over the proposed project. If the proposed project is under CEC jurisdiction, the environmental review will be conducted during and according to the Application for Certification (AFC) process. This process is listed in: 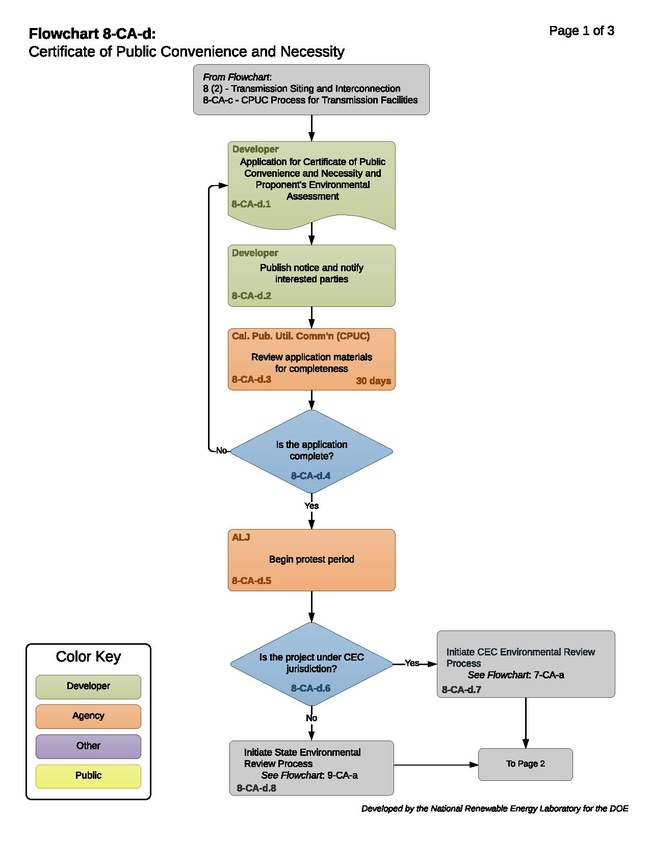 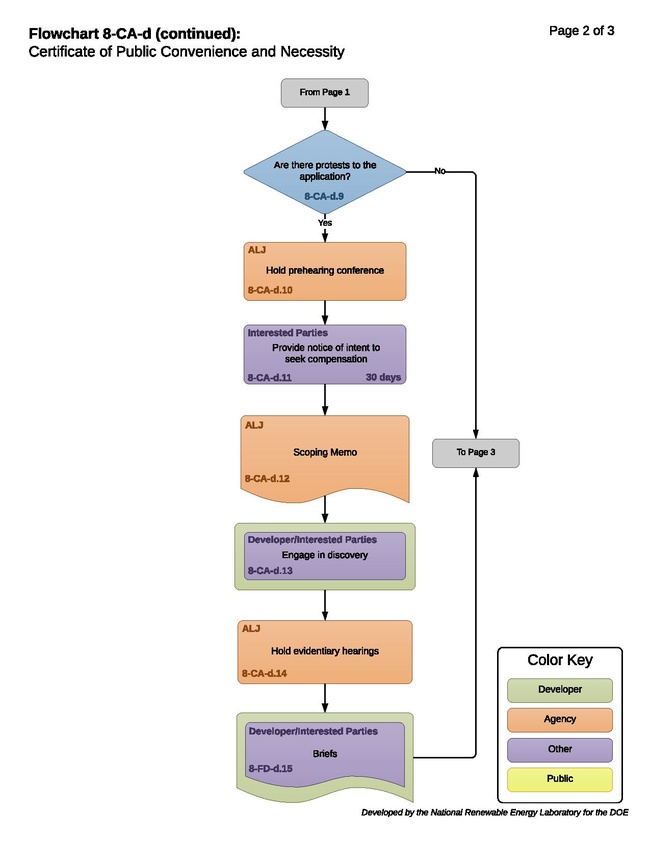 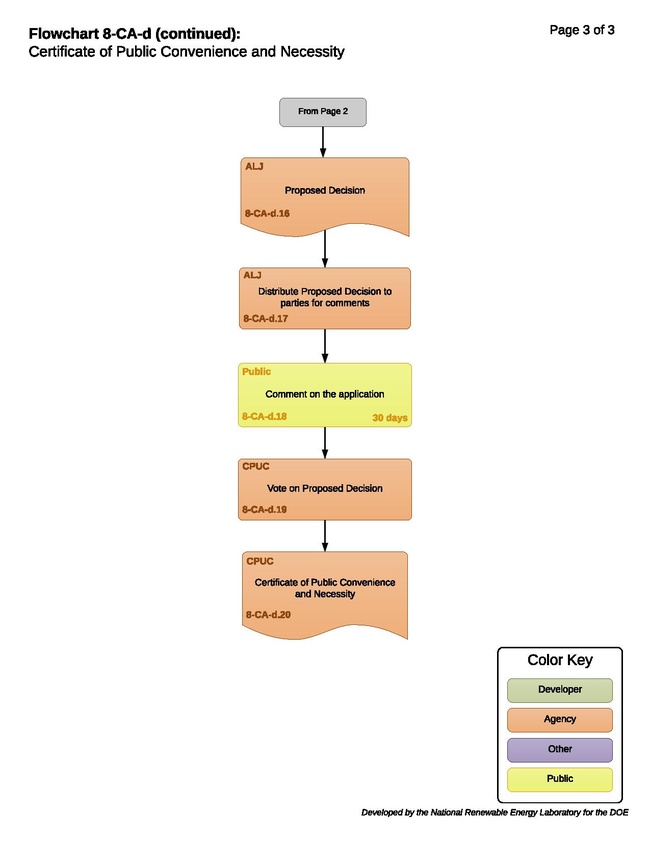 Additionally, the CPCN must comply with the CPUC's Rules of Practice and Procedure 2 through 8, and 15, and 16. Required elements of The CPCN include:

Additionally, the developer must publish public notice not less than once a week for two consecutive weeks in a newspaper of general circulation in the county(ies) in which the proposed facility will be located and the developer must post a copy of the notice on-site and off-site where the project would be located.

The filing of an application for a CPCN begins a 30 day protest period. During the protest period, anyone may file a protest against the proposed project. Issues raised in protests may include project costs, impacts on plant and animal habitats, elimination of agricultural land, interference with airport flight paths, inconsistency with land use or zoning, visual impacts, diminution of property values, health effects of electric and magnetic fields, choice of route, availability of non-wires alternatives, and impacts on recreational and park areas.

If the proposed project is under the jurisdiction of the CEC the environmental review process will be completed as part of the AFC siting process. This process is fully described in:

8-CA-d.9 – Are there Protests to the Application?

Qualified groups or individuals planning to seek intervenor compensation must file and serve notice within 30 days of the prehearing conference.

After the PHC, the assigned commissioner issues a scoping memo determining the issues, schedule, and other procedural matters for the proceeding.

Interested parties may engage in discovery in order to further bolster their protest against the application. Written data requests are the most common method of discovery in CPUC proceedings. Often, the ALJ, assigned commissioner, or the full Commission will set limits on the time for discovery. Discovery will normally be limited to matters other than the environmental issues that will be addressed in the CEQA process. The developer may also use this time to gather evidence addressing any protests against the proposed project.

At the conclusion of the evidentiary hearings, parties file briefs (and, often, reply briefs) regarding the conclusions the CPUC should reach in the proceeding. In opening briefs, parties offer arguments to support their positions, citing applicable facts that have been offered in evidence and received by the CPUC, as well as citing applicable law, and referring to prior CPUC decisions that may be informative. In reply briefs, parties are limited to pointing out errors of law or fact in the opening briefs provided by other parties.

Once the two-step review process has concluded, the ALJ prepares a proposed decision (PD) which includes information from the final EIR regarding the proposed project, project alternatives, impacts, and mitigations. The assigned commissioner may concurrently prepare and issue an alternate decision to the PD. Once the PD and the assigned commissioner’s alternate decision, if any, have been issued, other commissioners may subsequently issue alternate decisions. All CPUC decisions, whether a PD or an alternate, must be based upon the evidentiary record, including the final EIR, the testimony of the parties from the filed testimony, and evidentiary hearings.

8-CA-d.17 to 8-CA-d.18- Distribute Proposed Decision to Parties for Comments

The CPUC distributes the proposed decision to the parties involved in the hearings. Most PDs and alternate decisions are subject to 30 days of public review and comment before the CPUC may vote on them.

The ALJ may amend the PD in response to comments received. Similarly, a commissioner offering an alternate may amend it as well. No sooner than 30 days after the CPUC mails the proposed decision to the parties, the CPUC commissioners may vote on the decision. The Commission may reject or accept a proposed or alternate decision in its entirety, or change it in any way consistent with the law and evidentiary record.

Retrieved from "https://openei.org/w/index.php?title=RAPID/Roadmap/8-CA-d&oldid=1006703"
Categories:
OpenEI is developed and maintained by the National Renewable Energy Laboratory with funding and support from the U.S. Department of Energy and a network of International Partners & Sponsors.