The Arizona Corporation Commission (ACC) has authority over the transmission siting process in the state of Arizona. Any utility planning to construct a transmission line designed to operate at 115kV or more must file an application for a Certificate of Environmental Compatibility (CEC) with the ACC prior to construction. ARS 40-360(10) and 40-360.03. A “utility” is defined, in part, as “any person engaged in the…transmission of electric energy.” ARS 40-360(11). “Person is defined as “any state or agency, or political subdivision thereof, or any individual, partnership, joint venture, corporation, city or county, whether located within or without this state, or any combination of such entities.” ARS 40-360(8). 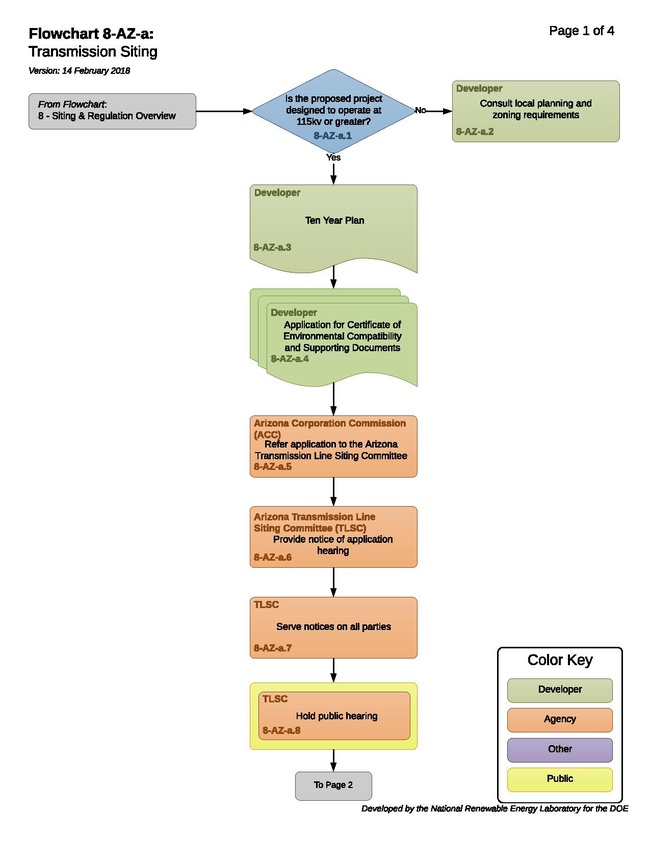 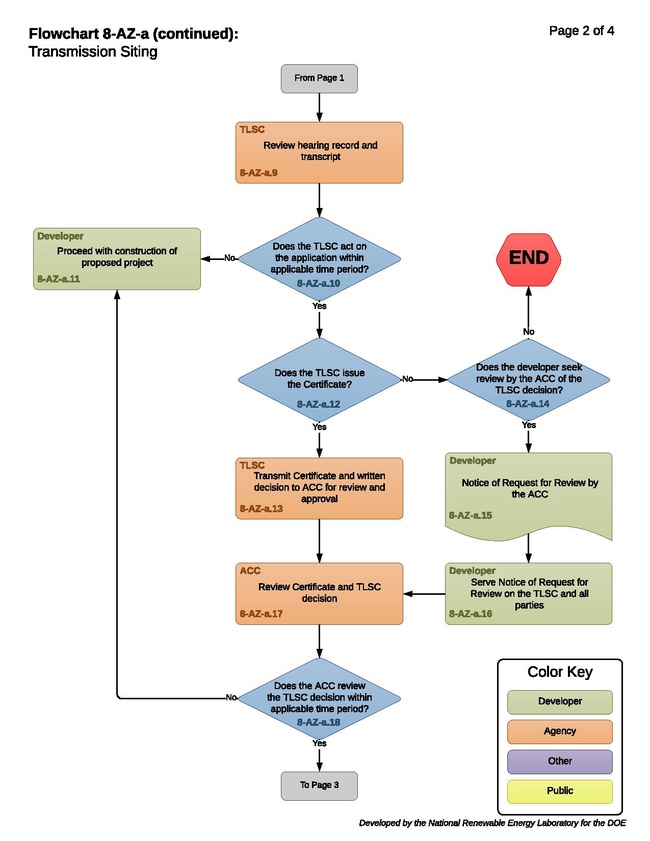 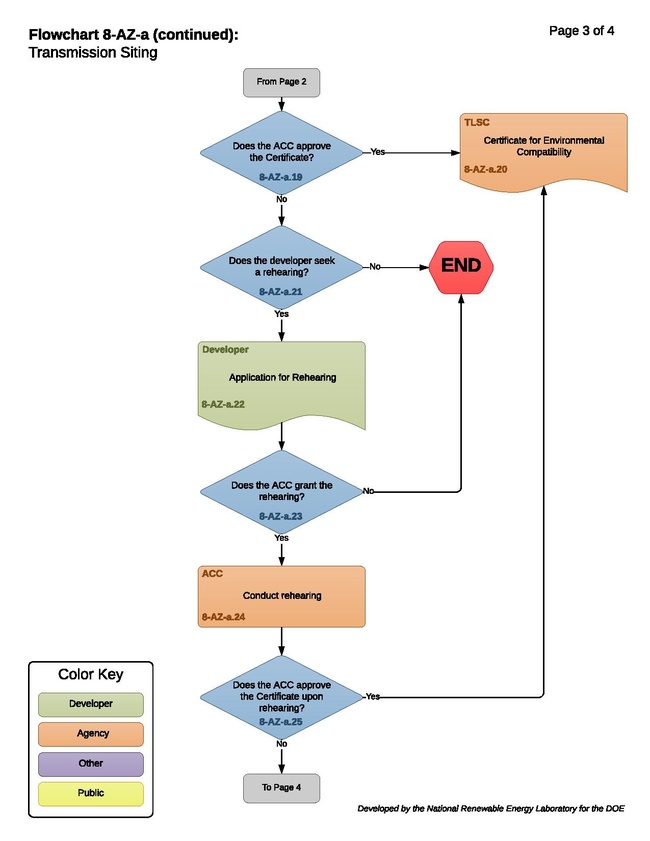 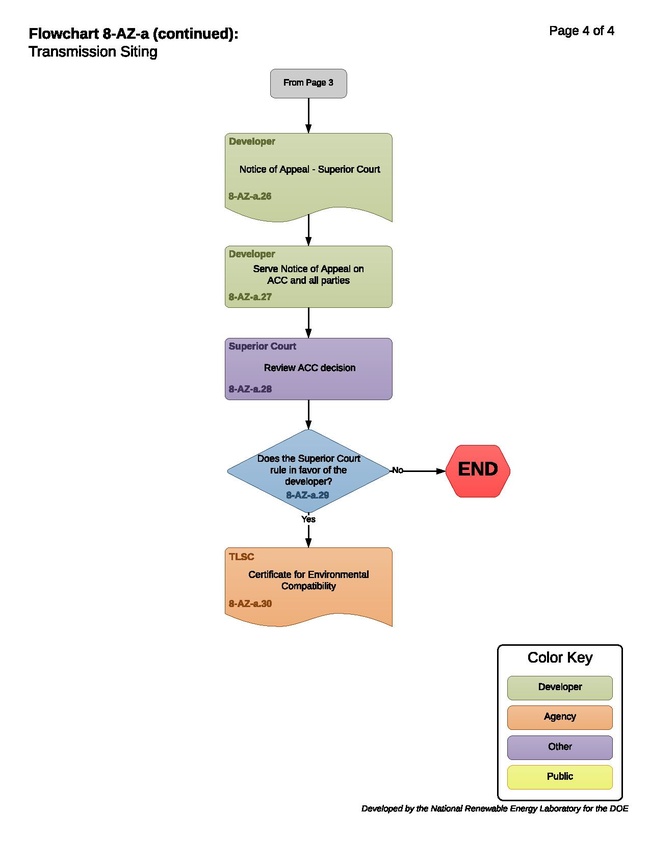 Developers planning to construct a transmission line designed to operate at 115kV or more must file a Ten Year Plan (“plan”) with the ACC on or before January 31 of each year. ARS 40-360.02(A). The developer must submit the initial plan 90 days before filing its CEC application. ARS 40-360.02(B). The plan must contain the following information to the extent that it is available:

If the developer fails to comply with any of these requirements, the ACC may refuse to consider the developer’s CEC application. ARS 40-360.02(E).

8-AZ-a.4 – Application for Certificate of Environmental Compatibility and Supporting Documents

The developer must file 25 copies of each CEC application with supporting exhibits with the Director of Utilities of the ACC. AAC R14-3-203(A). The application must contain:

CEC applications require a public hearing before the Arizona Transmission Line Siting Committee (TLSC). The ACC, within five days of filing, refers the CEC application to the TLSC for review and decision. ARS 40-360.03 and AAC R14-3-203(B). The chairman of the TLSC, within 10 days after receiving an application, provides public notice of the time and place of the hearing and provides notice by certified mail to the affected areas of jurisdiction at least 20 days prior to the hearing. ARS 40-360.04(A). The presiding officer, either the TLSC chairman or a qualified hearing officer appointed by the TLSC, serves notice of a hearing on a CEC application on all parties. AAC R14-3-201 and AAC R14-3-205.

Public hearings on CEC applications are conducted either by the full (TLSC) committee or by the hearing officer, and are presided over by the presiding officer. ARS 40-360.04(A). Parties to the hearing may present oral testimony and cross-examine witnesses. Any person may make a limited appearance in the proceeding by filing a statement with the chairman of the TLSC at least five days before the date of the hearing. Persons making a limited appearance are not permitted to present oral testimony or cross-examine witnesses. ARS 40-360.05(B). The TLSC reviews and considers the transcript of the public hearing and, by a decision of a majority of its members, issues or denies the CEC within 180 days after the developer files the CEC application. ARS 40-360.04(D).

If the TLSC fails to act on a CEC application within the applicable time frame, the developer may, in its discretion, immediately proceed with the construction of the proposed transmission line. ARS 40-360.08(B).

The developer must file a written notice of request for review with the ACC within 15 days after the TLSC issues its written decision. After filing its notice of request for review, the developer must serve the notice on the chairman of the TLSC and all other parties to the TLSC proceeding. AAC R14-3-214(C). The developer’s notice must state the grounds for review. The review is conducted on the basis of the record of the TLSC proceeding. The ACC may, at the request of any party, require written briefs or oral argument. The ACC renders a decision within 60 days after the developer files its notice. ARS 40-360.07(B).

8-AZ-a.18 – Does the ACC Review the TLSC Decision within the Applicable Time Period?

If the ACC fails to act on the review of the TLSC decision within the applicable time frame, the developer may, in its discretion, immediately proceed with the construction of the proposed transmission line. ARS 40-360.08(B).

If the ACC reverses the decision of the TLSC denying the CEC application, the ACC grants the CEC to the developer. ARS 40-360.07(B).

The ACC may grant or deny the application for rehearing. If the ACC grants the rehearing it will consider all pertinent facts, including those arising since the prior ACC order, to determine whether any aspect of its original order is unjust, unwarranted or should be changed. ARS 40-253(E). If the ACC denies the developer’s application for rehearing, the developer may pursue judicial review in the Superior Court. ARS 40-254(A).

Jurisdiction over the denial of a CEC application lies in the Superior Court of the county in which the ACC has its office. The developer must file a notice of appeal within 35 days after the denial of a rehearing by the ACC or within 35 days of being served with a copy of the ACC decision to be reviewed. ARS 40-254(A) and ARS 12-904(A). The notice must contain a statement of the findings to be reviewed. ARS 12-909(A). The developer must serve the notice of appeal on the ACC and all other parties within 10 days of the developer’s filing of the notice of appeal. ARS 12-904.

Retrieved from "https://openei.org/w/index.php?title=RAPID/Roadmap/8-AZ-a&oldid=973988"
Categories:
OpenEI is developed and maintained by the National Renewable Energy Laboratory with funding and support from the U.S. Department of Energy and a network of International Partners & Sponsors.