The power plant's location, size, type of customer the power plant sells energy to, and whether the power plant sells energy in "interstate commerce" will determine what permits the facility requires. Siting procedures can be complex and contentious, especially when a proposed facility conflicts with other land uses, or is proposed in environmentally or culturally sensitive areas. Building a utility-scale solar facility usually requires permission from federal, state, tribal or local government entities. As an initial matter, under the Federal Power Act the Federal Energy Regulatory Commission has authority over “public utilities,” which under 16 USC 824a(e) includes any person who owns or operates facilities subject to jurisdiction of FERC, including any person who owns or operates a facility for the transmission of electric energy in interstate commerce and to the sale of electric energy at wholesale in interstate commerce. Interstate commerce has been interpreted broadly to include when the transmission system is interconnected and capable of transmitting electric energy across the state boundary, even if the contracting parties and the electrical pathway between them are in one state. See Florida Power & Light Company, 29 FERC, ¶ 61, 140 at 61, 291-92 (1984).

If the plant will be located on state land, the developer may be required to follow a state energy facility siting procedure. The process for obtaining a permit on state land differs from state-to-state, but each generally includes an application process, a time for public comment, and a process for appeals. 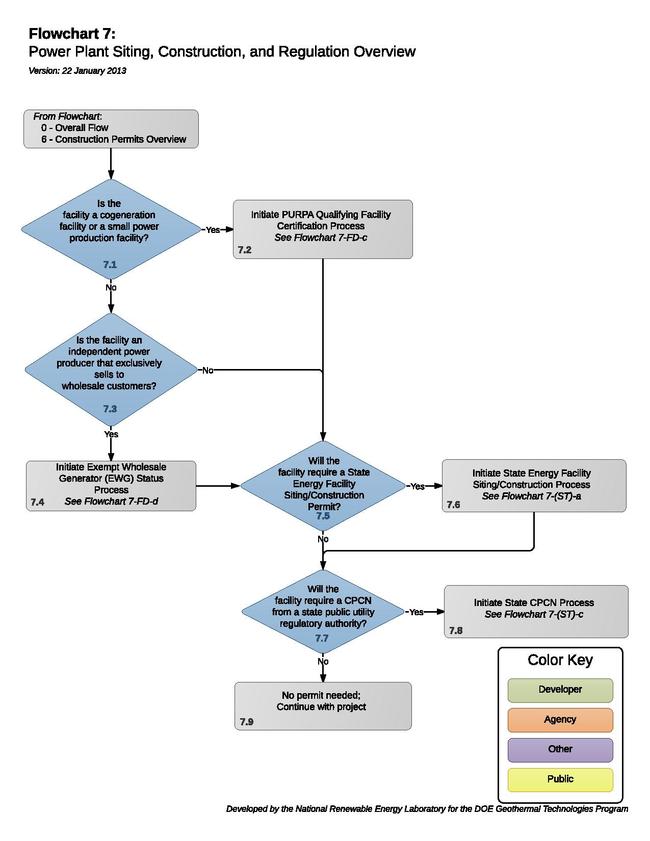 Note - Qualifying Facilities under 20 megawatts are exempt from the entire Federal Power Act, including sections 205 and 206.

Until June 2011, projects in California that were over 1.5 MW but under 20 MW were considered Qualified Facilities (QFs) under PURPA's mandatory purchase requirement and exempt from state regulation. In June 2011, FERC approved a December 2010 California Public Utilities Commission Settlement Agreement establishing a "QF/CHP (Combined Heat and Power) Program. The settlement agreement terminated the PURPA mandatory purchase option in accordance with 18 CFR 292.309, and replaced it with various QF purchase options including a PPA for new QFs under 20 MW.

7.3 to 7.4 – Is the Facility an Independent Power Producer That Exclusively Sells to Wholesale Customers?

If the power plant is an independent power producer, the plant may be exempt from certain federal regulations. The Energy Policy Act of 1992 created an exemption from the Public Utility Holding Company Act (PUHCA) for ‘Exempt Wholesale Generators’ (EWG). EWGs include independent power producers that sell energy only to wholesale customers and are not QFs. . For EWGs to maintain their status they must restrict sale agreements to wholesale sales. Like, Qualifying Facilities over 20 megawatts, EWGs are subject to FERC regulations on rate approval under section 205 of the Federal Powers Act. However, unlike Qualifying Facilities, EWGs may not take advantage of retail sale opportunities in local jurisdictions.

7.5 to 7.6 - Will the Facility Require a State Energy Facility Siting/Construction Permit?

Some states require siting approval or a permit to construct for energy facilities from a state Public Utilities Commission or similar state or local agency. Below is a list of states that require some type of siting permission.

If the developer is constructing a thermal power plant with a capacity of 50mw or more, a permit must be obtained from the California Energy Commission (CEC).

7.7 to 7.9 – Will the Facility Require a CPCN from a State Public Utility Regulatory Authority?

Developers must obtain a Certificate of Public Convenience and Necessity (CPCN) from the Public Utilities Commission of Nevada (PUC) if they qualify as a “public utility” and are seeking to develop energy generation facilities. The term “public utility” includes “any plant or equipment, or any part of a plant or equipment, within this State for the production, delivery or furnishing for or to other persons, including private or municipal corporations, heat, gas, coal slurry, light, power in any form or by an agency, water for business, manufacturing, agricultural or household use, or sewerage service, whether or not within the limits of municipalities.” [[NRS 704 - Regulation of Public Utilities Generally

Retrieved from "https://openei.org/w/index.php?title=RAPID/Roadmap/7_(1)&oldid=947109"
Categories:
OpenEI is developed and maintained by the National Renewable Energy Laboratory with funding and support from the U.S. Department of Energy and a network of International Partners & Sponsors.