The power plant's location, size, type of customer the power plant sells energy to, and whether the power plant sells energy in "interstate commerce" will determine what permits the facility requires. Siting procedures can be complex and contentious, especially when a proposed facility conflicts with other land uses, or is proposed in environmentally or culturally sensitive areas. Building a power plant usually requires permission from local, tribal, state or federal government entities. If the plant will be located on state land, the developer may be required to follow a state energy facility siting procedure. The process for obtaining a permit on state land differs from state-to-state, but each generally includes an application process, a time for public comment, and a process for appeals.

As an initial matter, under the Federal Power Act the Federal Energy Regulatory Commission has authority over “public utilities,” which under 16 USC 824(e) includes any person who owns or operates facilities subject to jurisdiction of FERC, which includes any person who owns or operates a facility for the transmission of electric energy in interstate commerce and to the sale of electric energy at wholesale in interstate commerce. Interstate commerce has been interpreted broadly to include when the transmission system is interconnected and capable of transmitting electric energy across the state boundary, even if the contracting parties and the electrical pathway between them are in one state. See Florida Power & Light Company, 29 FERC, ¶ 61, 140 at 61, 291-92 (1984). 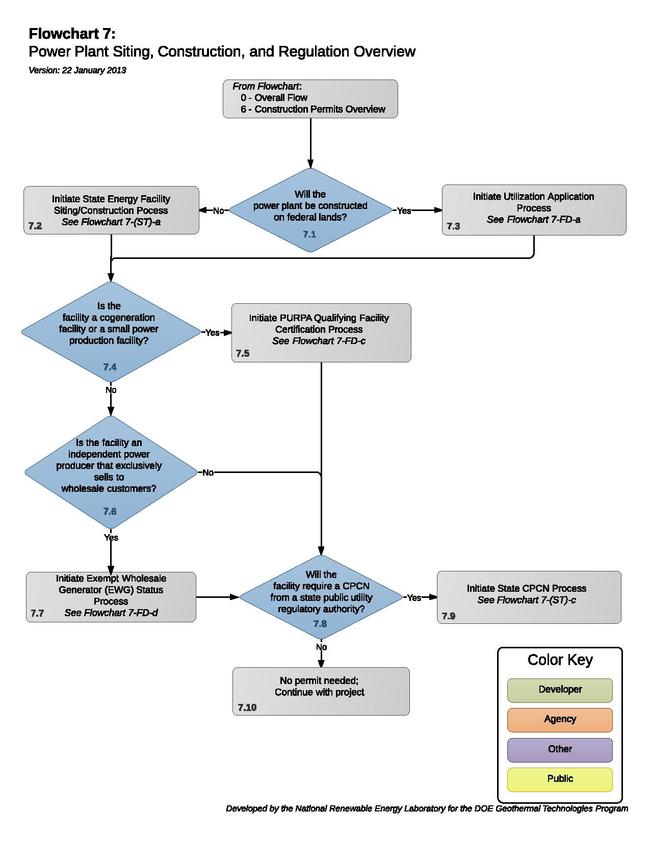 If the power plant will be constructed on state lands, the developer will initiate a state specific energy facility siting and construction process.

In Hawaii, may need a Geothermal and Cable System Development Permit to build a geothermal power plant and then transmit the energy to another island through an inter-island deep water transmission cable system. For more information, see:

In Montana, a developer must obtain a Certificate of Compliance to construct a geothermal generating facility with the capacity of producing fifty (50) MW or more. For more information, see:

In Oregon, a developer may need approval from the Oregon Siting Board for the development of a geothermal facility. For more information, see:

In Texas, a developer may need to register a geothermal facility with the Public Utility Commission of Texas. For more information, see:

In Washington, a developer may not begin construction of a new energy facility without an Energy Facility Siting Certification form the Washington State Energy Facility Evaluation Council. For more information, see:

If the power plant will be constructed on federal lands, the developer will initiate the Land Access Process Overview.

If the power plant will be constructed on state lands, the developer will initiate a state specific energy facility siting and construction process.

Qualifying Facilities receive special rate and regulatory treatment. Qualifying Facilities have the right to sell energy to public utilities at the "avoided cost" rate (i.e. the cost to the public utility to produce the energy itself), provided FERC has not relieved the utility from its purchase obligation under 18 CFR 292.309. Under USC 824a-3(m) after August 8, 2005, no electric utility shall be required to enter into a new contract or obligation to purchase electric energy from a qualifying cogeneration facility or a qualifying small power production facility if FERC finds that the qualifying cogeneration facility or qualifying small power production facility has nondiscriminatory access to:

Qualifying Facilities also have the right to purchase supplementary power, backup power, maintenance power, and interruptible power at reasonable rates from public utilities. Finally, certain Qualifying Facilities, including eligible solar and geothermal small power production facilities that produce electric energy solely by using any combination of biomass, waste, hydro, wind, solar, or geothermal resources as a primary energy source and has a power production capacity no greater than 80(MW), are exempt from specific statutes and regulations. The exemptions include:

Note - Qualifying Facilities under 20 megawatts are exempt from the entire Federal Power Act, including sections 205 and 206.

7.6 to 7.7 – Is the Facility an Independent Power Producer That Exclusively Sells to Wholesale Customers?

If the power plant is an independent power producer, the plant may be exempt from certain federal regulations. The Energy Policy Act of 1992 created an exemption from the Public Utility Holding Company Act (PUHCA) for ‘Exempt Wholesale Generators’ (EWG). EWGs include independent power producers that sell energy only to wholesale customers. For EWGs to maintain their status they must restrict sale agreements to wholesale sales. Like, Qualifying Facilities over 20 megawatts, EWGs are subject to FERC regulations on rate approval under section 205 of the Federal Powers Act. However, unlike Qualifying Facilities, EWGs may not take advantage of retail sale opportunities in local jurisdictions.

7.7 to 7.9 – Will the Facility Require a CPCN from a State Public Utility Regulatory Authority?

If the state public utility regulatory authority regulates the facility, the facility may need a Certificate of Public Convenience and Necessity (CPCN). The CPCN generally is necessary to establish a public need for the facility and the developer’s ability to fill that need. Some states do not regulate independent power producers if they do not sell power directly to the public because the state only regulates developers that fall within the states’ definition of “public utility”. Developers who are also public utilities will be regulated by the state utility regulatory authority and will likely be required to obtain a CPCN.

Under Alaska Statutes 42.05.211 a public utility may not operate and receive compensation for providing a commodity or service without first obtaining a Certificate of Public Convenience and Necessity from the Regulatory Commission of Alaska.

Alaska defines "public utility' in Alaska Statutes 42.05.990 (5) to include every corporation whether public, cooperative, or otherwise, company, individual, or association of individuals, their lessees, trustees, or receivers appointed by a court, that owns, operates, manages, or controls any plant, pipeline, or system for furnishing, by generation, transmission, or distribution, electrical service to the public for compensation.

Under Hawaii Revised Statutes 269-7.5 no public utility may commence its business without first having obtained from the Hawaii Public Utilities Commission a Certificate of Public Convenience and Necessity.

(1) Owns, controls, operates, or manages plants or facilities for the generation, transmission, or furnishing of electricity; and
(2) Provides, sells, or transmits all of that electricity, except such electricity as is used in its own internal operations or is used for its own consumption, directly to a public utility for either transmission or distribution to the public.

Under Idaho Statues 61-526 no electrical corporation may begin construction of a line, plant or system or any extension of a line, plant, or system, without first obtaining a Certificate of Public Convenience and Necessity (CPCN) from the Idaho Public Utilities Commission. Electrical corporations do not need a CPCN for an extension within any city or county, within which it has theretofore lawfully commenced operations, or for an extension into territory whether within or without a city or county, contiguous to its line, plant or system, and not theretofore served by a public utility of like character, or for an extension within or to territory already served by it necessary in the ordinary course of its business.

Idaho defines "electrical corporation" in Idaho Statutes 61-119 to include every corporation or person, their lessees, trustees, receivers or trustees appointed by any court whatsoever, owning, controlling, operating or managing any electric plant for compensation within this state, except where electricity is generated on or distributed by the producer through private property alone, solely for his own use or the use of his tenants and not for sale to others, and excepting also, where the electricity is to be used exclusively in operations incident to the working of metalliferous mines and mining claims, mills, or reduction and smelting plants, and the transmission lines and distribution systems are owned by the consumer or where several consumers severally own their individual distribution systems and jointly own, in their own names or through a trustee, the transmission lines used in connection therewith and transmit such electricity, whether generated by themselves or procured from some other source, over such transmission lines and distribution systems without profit, and to be used for their private uses for the purposes aforesaid in places outside the limits of incorporated cities, towns and villages, and not for resale or public use, sale or distribution.

Under Nevada Revised Statutes 704.865 a person, other than a local government, may not begin to construct a utility facility in the Nevada without first having obtained a permit from the Public Utilities Commission of Nevada. The replacement of an existing facility with a like facility, as determined by the Public Utilities Commission of Nevada, does not constitute construction of a utility facility. Any facility, with respect to which a permit is required, must thereafter be constructed, operated and maintained in conformity with the permit and any terms, conditions and modifications contained therein. A permit may only be issued pursuant to NRS 704.820 to 704.900, inclusive. Any authorization relating to a utility facility granted under other laws administered by the Commission constitutes a permit under those sections if the requirements of those sections have been complied with in the proceedings leading to the granting of the authorization.

Utah defines "electrical corporation in Utah Code 54-2-1(7) to include every corporation, cooperative association, and person, their lessees, trustees, and receivers, owning, controlling, operating, or managing any electric plant, or in any way furnishing electric power for public service or to its consumers or members for domestic, commercial, or industrial use, within this state, except independent energy producers, and except where electricity is generated on or distributed by the producer solely for the producer's own use, or the use of the producer's tenants, or for the use of members of an association of unit owners formed under Title 57, Chapter 8, Condominium Ownership Act, and not for sale to the public generally, and except where the electricity generated is consumed by an owner, lessor, or interest holder, or by an affiliate of an owner, lessor, or interest holder, who has provided at least $25,000,000 in value, including credit support, relating to the electric plant furnishing the electricity and whose consumption does not exceed its long-term entitlement in the plant under a long-term arrangement other than a power purchase agreement, except a power purchase agreement with an electrical corporation.

Utah defines an "independent energy producer" as every electrical corporation, person, corporation, or government entity, their lessees, trustees, or receivers, that own, operate, control, or manage an independent power production or cogeneration facility. Utah Code 54-2-1(15).

Any public utility seeking to construct and operate a facility or an extension of a facility must file an application for a Certificate of Public Convenience and Necessity.

Certificate of Convenience and Necessity:
7-TX-c

In New Mexico, any “public utility” that seeks to provide electricity for the public must obtain a Certificate of Public Convenience and Necessity (CPCN) from the New Mexico Public Regulation Commission (“Commission”). Under the New Mexico Public Utility Act, a “public utility” or “utility” means every person not engaged solely in interstate business and that may own, operate, lease or control any plant, property or facility for the generation, transmission or distribution, sale or furnishing to or for the public of electricity for light, heat or power or other uses. 62-3-3(G)(1).

Certificate of Convenience and Necessity:
7-NM-c

Retrieved from "https://openei.org/w/index.php?title=RAPID/Roadmap/7&oldid=947101"
Categories:
OpenEI is developed and maintained by the National Renewable Energy Laboratory with funding and support from the U.S. Department of Energy and a network of International Partners & Sponsors.